Traditional costume of Scotland. Everything you should know about it

The folk dress of Scotland is pretty popular and famous, so perhaps you already know something about it. But we might reveal new facts and details of it in this article. Or at least, we’d like to share the photos of some cute Scottish garments and accessories. The authentic clothing is always wonderful, and weird for the outsiders, and skillfully made, and just plain beautiful.

We’re going to show you all of the items that make up the Scottish traditional men’s costume.

And we’ll start with the shoes – ghillie brogues. These are low-heeled shoes made of heavy leather, originating in Scotland and Ireland. They are now usually worn for social events. Gillies originated as a shoe that would drain water and dry quickly due to the lack of a tongue, and they didn’t get stuck in the mud because the laces were above the ankle. 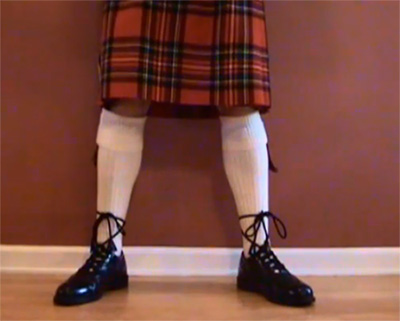 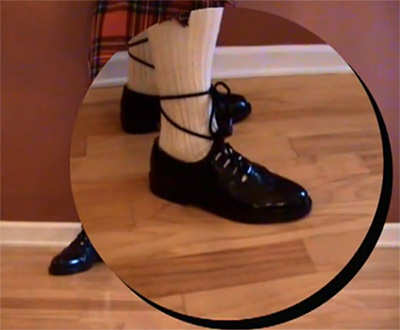 These are the kilt hoses and they are long stockings usually worn knee-high. They are nice to match any tartan color. They can also be found in dice patterns which are required for highland dancers. The most common color of hoses, however, is the cream or off-white – the color of unleash wool. 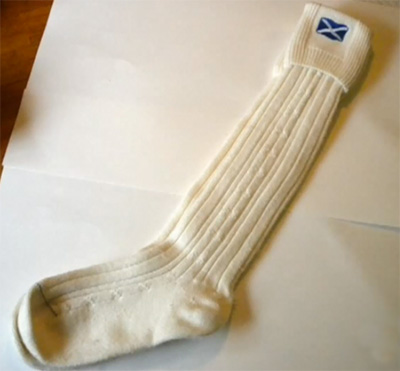 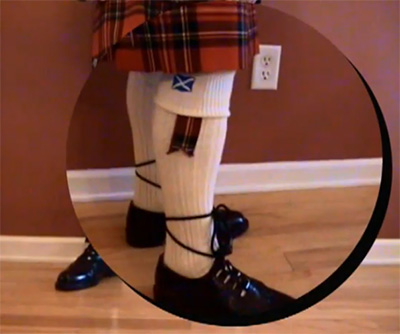 Inside the stocking is a sgian dubh. The name “sgian dubh” comes from a Gaelic language, meaning “black knife”. It also suggests that “black” means “secret or hidden”. The sgian dubh may have evolved from the “sgian achlais”, a dagger that could be concealed under the armpit and was used by the Scots of the 17th-18th centuries. This knife was slightly larger than the average modern sgian dubh and was carried in the upper sleeve or lining of the body of the jacket. Courtesy and etiquette would demand that once you come into the home of a friend, any concealed weapons should be revealed. It follows that the sgian achlais would be removed from its hiding place and displayed in the stocking top, held by the garter. 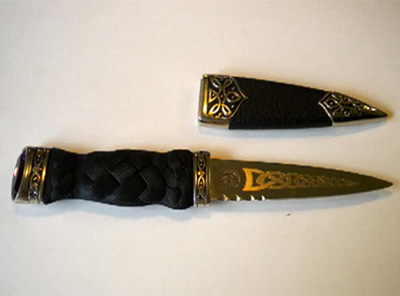 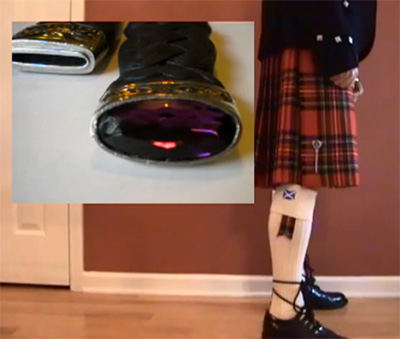 These are the flash & garters, and they are worn to hold the sgian dubh and house up. The decorative flash sometimes matches the kilt’s tartan or plaid.

This is the kilt and its history stretches back to at least the 16th century. The kilt is a knee-length garment with pleats at the rear. It is most often made of woolen cloth in tartan pattern. 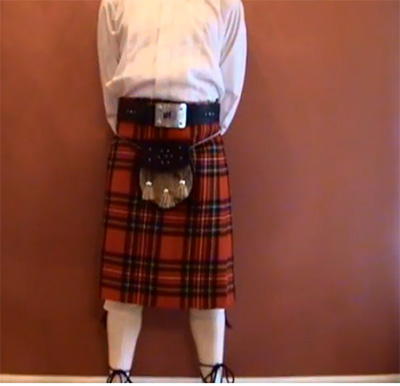 It is the traditional dress of men in the Scottish highlands of the 16th century. Since the 19th century, it has been associated with the wider culture of Scotland in general or with Celtic and was specifically Gaelic heritage elsewhere. 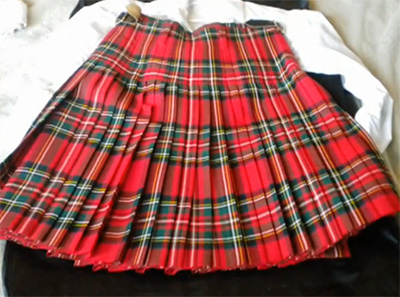 The Scottish kilt is mainly worn on formal occasions or at Highland games and sports events. It has also been adapted as an item of fashionable informal and formal male clothing in recent years. 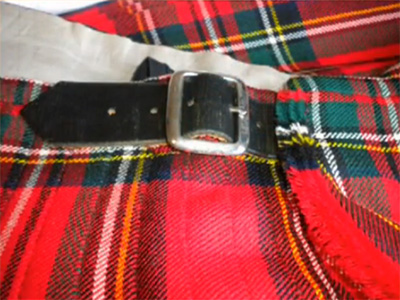 The kilt in the photos here is the Royal Stewart tartan. Each tartan belongs specifically to a particular clan, and there are over 7,000 tartans with different colors and patterns.

This is the kilt pin and it is a piece of jewelry worn on the kilt. Its function is to prevent the apron from falling or blowing up by securing the outer apron. The kilt pins often depict animals and plants. This one is a thistle which is the national emblem of Scotland. 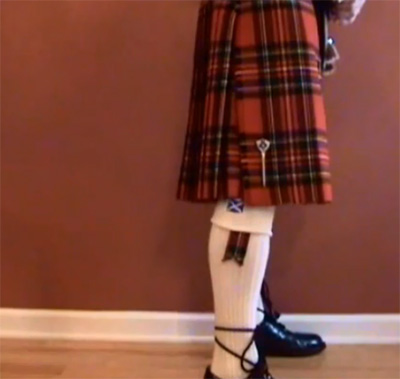 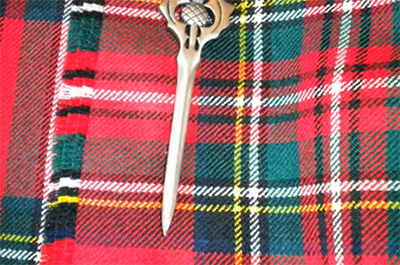 This is the sporran and it's a traditional part of the Scottish highland dress. It is a pouch that performs the same function as pockets on the pocketless Scottish kilt. It is made of leather or fur. The sporran usually has elaborate silver or other ornamentation. It is worn on a chain or hung from a kilt belt, conventionally lying in the front of the groin of the wearer. Since the traditional kilt does not have pockets, the sporran serves as a wallet and a container for any other item. It is essentially a survival of the common European medieval belt pouch, which was replaced elsewhere as clothing became to have pockets but remained in the Scottish islands because of the lack of these accessories in the traditional kilt. 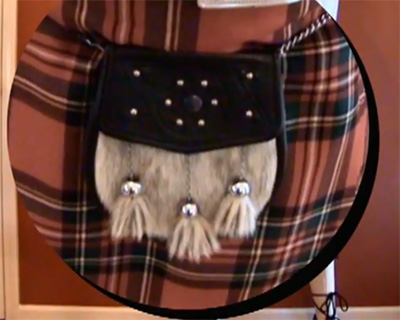 This is the belt and it's not required on the modern tailored kilt. It traditionally has tapered plates fastened about the body securely enough with the buckles and straps. The kilt belt worn with such kilts is purely decorative during ceremonial use. They are typically fairly wide – between 2,5-3 inches or so. The black or brown leather is the most common. 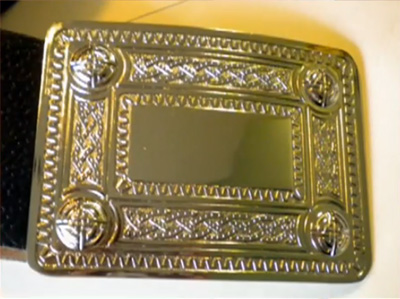 Generally, a white shirt would be worn with a bow tie or tie. Various jackets are worn formally with the kilt. This particular jacket design is called the “Bonnie Prince Charlie” jacket after Charles Edward Stuart, the exiled Scottish claimant to the British throne. 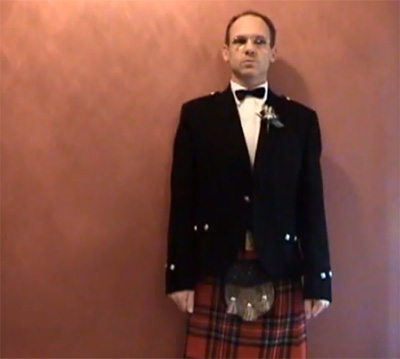 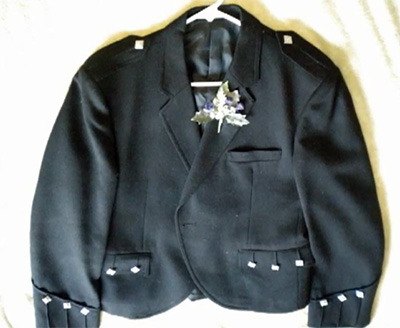 The formal jacket has a buttonhole worn, for instance, at weddings.

Cufflinks are a preferred formal wear for button down shirts. 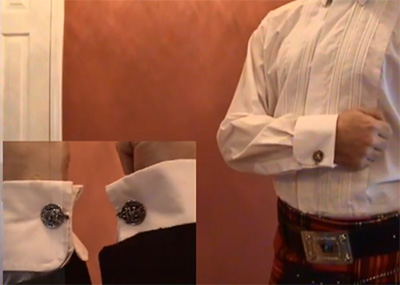 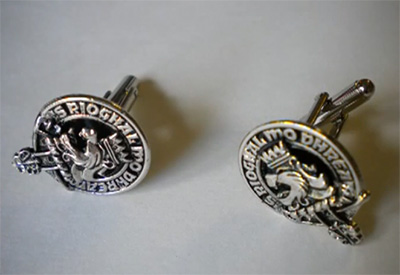