The central Ukrainian regions are characterized by a specific embroidery technique called “whitework” used to embellish the traditional clothing. Actually, every region of Ukraine has its own needlework features, techniques, patterns, and colors. But whitework is mostly seen only in a certain area. This extraordinary embroidery technique not only creates beautiful outfits but demands a lot of skill from a craftswoman. Though in the end, it’s worth all the effort. Let’s find out how Ukrainian whitework looks like, where women took inspirations for new patterns, and what whitework symbolizes.

Here you are a few examples of whitework: Whitework and openwork on Ukrainian embroidered shirts. Close-ups of gorgeous embroidery patterns

One of the traditional embroidery techniques used in Central Ukraine is the whitework. And the most typical item for this area is an embroidered shirt made in whitework. These snow-white garments look pure, sophisticated, and sublime even. They aren’t as bright as embroidered shirts from other regions of Ukraine or other countries, but they definitely have a certain charm. 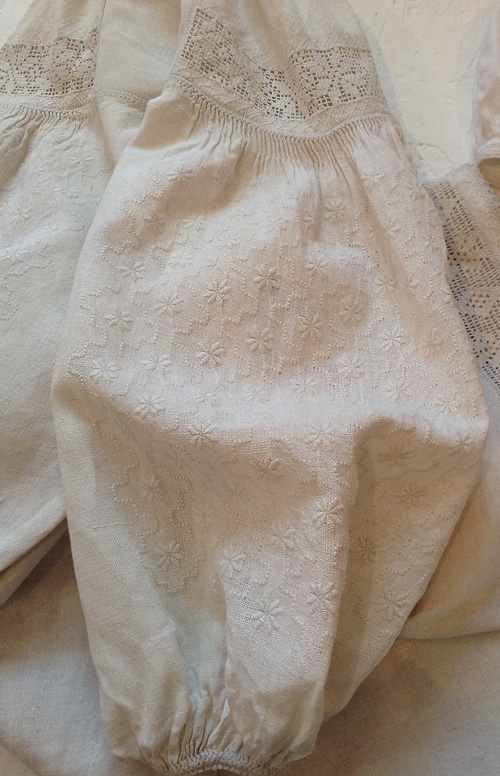 Of course, Ukraine is not the only country where whitework is used. We can see folk clothes adorned with this embroidery techniques in Germany, Czechia, Poland, etc, not to mention aristocratic clothing in Europe in the 19th century when people were crazy for lace and whitework.

In general, whitework is a needlework technique when stitching threads are made in the same white color as the background fabric. In the end, we get white embroidery on white background but with a distinct texture.

In Ukraine, this embroidery technique is known and practiced for centuries. Ukrainian embroidered shirts made in the whitework technique were traditionally sewn from handmade linen, cotton, or rarer hemp fabric.

By the way, do you know how the naturally grayish cloth, linen, for example, was whitened in the past? Hand-woven fabric usually has a natural grayish color, it never is snow-white. But if a woman wanted her shirt to look festive and pretty, she needed to whiten it. Of course, there were no chemical bleaches that we often use now, so people used only nature. Long pieces of hand-woven fabric were soaked n water and laid in the sun. Gradually, the cloth turned whiter and whiter, until it was snow-white. Only then, women used this fabric to sew festive shirts and other garments. The most important pieces of clothes – wedding garments and ceremonial “rushnyk” towels – were whitened at both sides, while day-to-day shirts could be made from natural fabric, whitened just a little or not whitened at all. 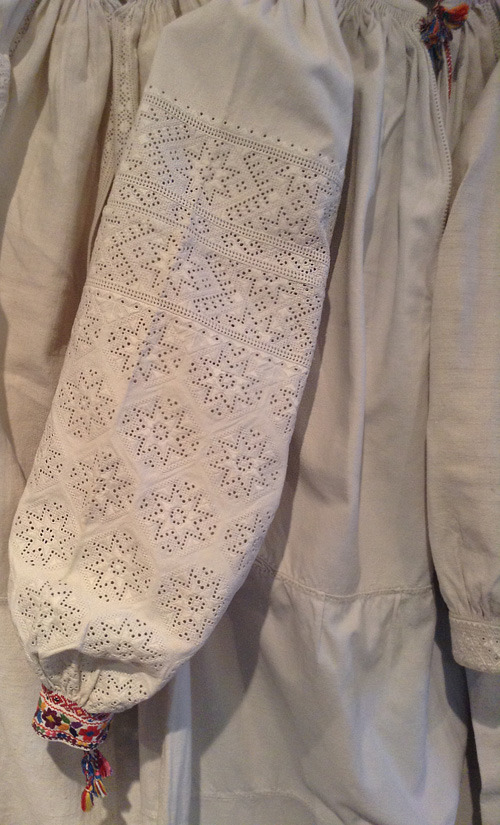 Whitework is a comparatively complicated embroidery technique because you can’t hide any imperfections behind the bright color. And also, to make such a shirt look eye-catching and stand out among other garments, the craftswoman has to use at least several different needlework stitches. Often, there were up to 15-20 different embroidery stitches used on one shirt. The ethnographers claim that Ukrainian women knew up to 100 stitches (not just the cross-stitch) and they chose and mixed several of them for each shirt. 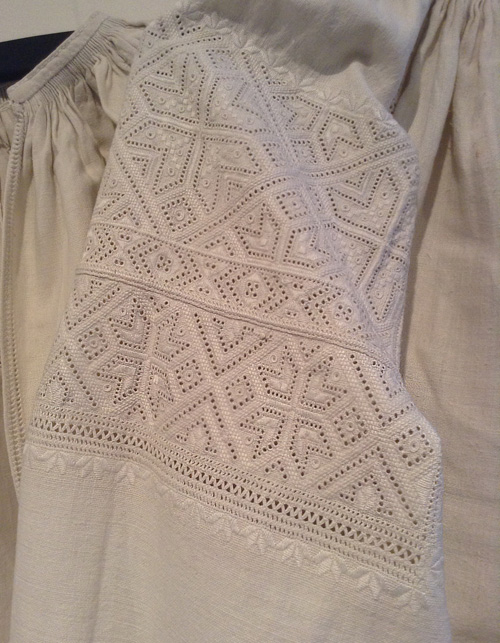 There is a curious whitework variation that occurs in central and northern Ukraine – snow-white embroidery on natural grayish fabric. Its name can be roughly translated as “embroidery by frost” because it reminds us of hoarfrost. Some people consider that the patterns for this needlework were inspired by the hoarfrost on window glass (from the times when there were no plastic windows). Such whitework looks really pretty and unusual – the patterns contrast with the shade of the cloth. 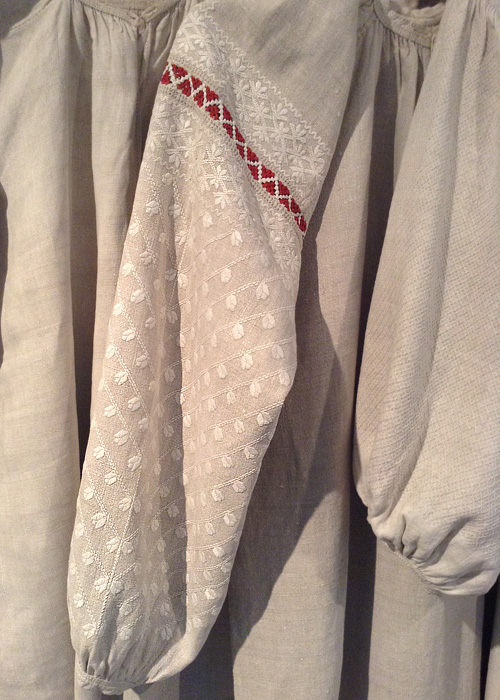 Ukrainian traditional embroidered shirts were always considered sacred. They weren’t just an article of clothing but also performed the function of protecting a person from the evil, attracted good luck and happiness, and showed off the skill of a woman. The latter was a very important factor as every man and every family wanted to gain a good and capable worker from marriage, not just a beloved friend and lover. Hand labor was the means to survive at the time and people mostly lived off their everyday work. So, every girl started to make and decorate clothing for her future at an early age. When she got married (at the age of 16-21 usually), she already had at least 5-20 embroidered female shirts, 3-15 male shirts, and many other garments and accessories as her dowry. 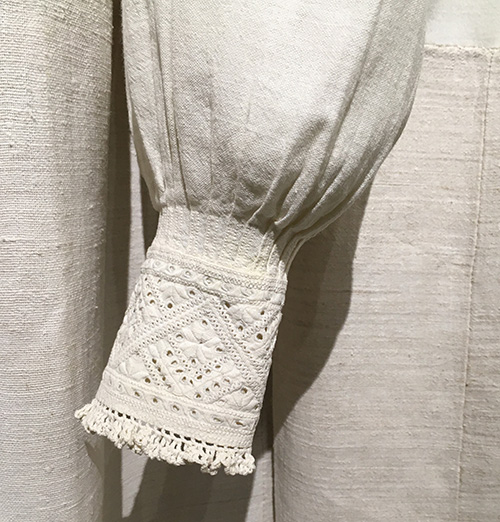 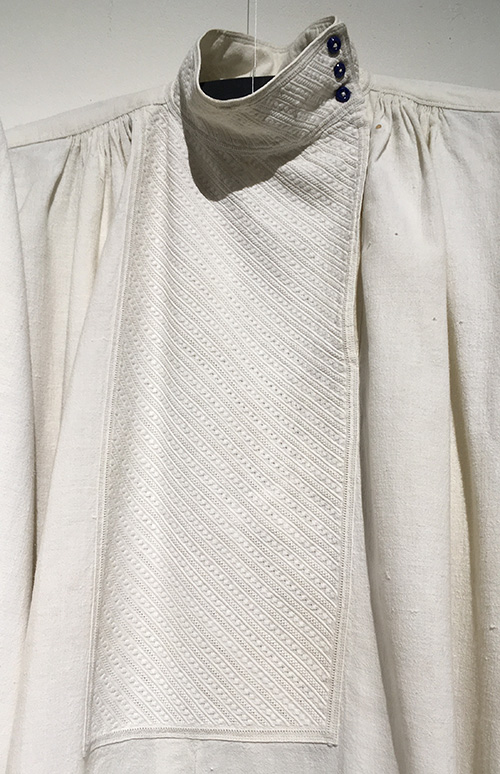