It’s not often that the folklore and traditional costumes are presented at the Fashion Weeks around the world. Most of the designers strive to invent and show something new, to shock and surprise the public. Though, one of Ukrainian Fashion Weeks presented the vintage folk clothes and got really good feedback. Sometimes the latest clothing trends and old clothing traditions get intertwined or merged pretty nicely, don’t they?

Fans of traditional Ukrainian dress were given a special treat during the Ukrainian Fashion Week in its capital Kyiv in 2015. Vintage folk costumes – some over a hundred years old – were presented during one of the shows. The display was part of a cultural project called “Roots” (or “Vytoky” in Ukrainian). it was aimed at showing the public traditional Ukrainian clothes from various regions of the country. The project organizers and participants say they consider fashion an important element of national identity.

“Costume indeed plays a big role – it creates the spirit of the 19th century. I personally today feel myself a real Ukrainian girl in this costume”, says Katya Kokhanova, one of the models.

20 vintage Ukrainian dresses and costumes, borrowed from museums and private collections, were put on display. Some date back to the 19th and 20th centuries. A number of the items were typical for certain regions of Ukraine and could not be seen anywhere else.
For some models, wearing traditional vintage dress is a new and interesting experience. Others, like Yaroslav, are already familiar with the country's folk fashion. 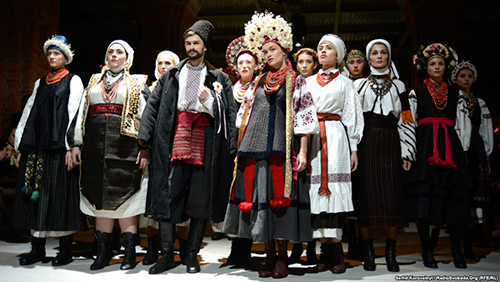 “I live in this style in fashion. It's not the first time I've seen ethnic costume. It's very dear to me and that's why I feel comfortable in it”, comments Yaroslav, one of the models.

The vintage collection displayed at Kyiv Fashion Week included 15 female and 5 male costumes. The collection also included jewelry and accessories previously belonging to aristocratic Ukrainians who, in the past, often imported such pieces from abroad.

“I'm proud that we, Ukrainians, were elegant and luxurious. I would like to bring this aesthetic back. It's very pleasant to see that people are impressed by it. I can see that we deliver the message”, says Maria Kvitka, the project curator.

The project organizers hope that the show will inspire local designers and the public to pay more attention to traditional Ukrainian fashion and use its elements in their work and daily life.