The national costume of Ukraine always includes a necklace. In old days, the rings, earrings, or bracelets were traditionally less common. But a necklace was a must-have and an integral part of any attire – festive or daily dress. It served not only as an embellishment but also as a protection amulet and a mean to show the status and financial capability of the wearer. The Ukrainian tradition of using various necklaces is rich and exciting.

The national costume of Ukraine always includes a necklace. The rings, earrings, or bracelets are traditionally less common, though in modern times, they are used by the majority of local women (they weren’t as popular until the middle of the 20th century). But the necklace was more than just a jewelry piece or a festive decoration. It was a kind of amulet used to protect the owner from the evil eye, some illnesses (the color of the stones even helped to diagnose an illness), etc. Also, the necklace was a mean of displaying the status of a woman. So, Ukrainian traditional necklace was and still is one of the most important parts of the traditional outfit. 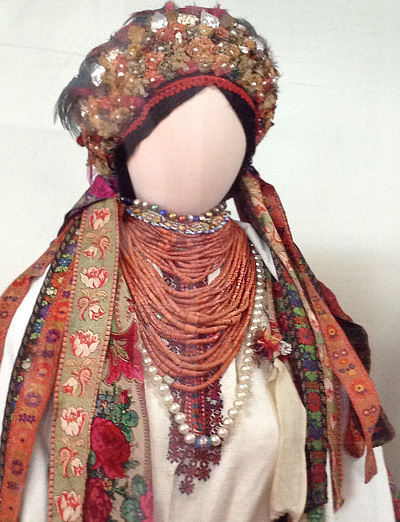 Combination of several coral necklaces, a pearl necklace, a glass necklace, and a bead weaving necklace. Wedding jewels of a wealthy woman from Kolomyia district, Ivano-Frankivsk region, the beginning of the 20th century

Ukrainian women used to wear necklaces every day. It was an integral part of any attire, no matter ordinary or festive. Even the poorest females wore at least 2-row necklaces; wealthier women used 10 or 15 rows; wealthy brides decorated their wedding attire with so many rows of various necklaces that they densely covered the neck, breasts, and stomach – from the chin to the waist. 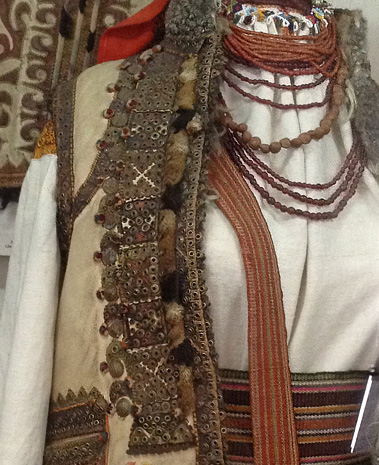 The materials used to make the traditional Ukrainian necklaces were diverse. Among the most popular were metal, corals, amber, pearls, and Venetian glass. But the most ancient beads were made from clay, grains, fruit and veggie pits, and clams. 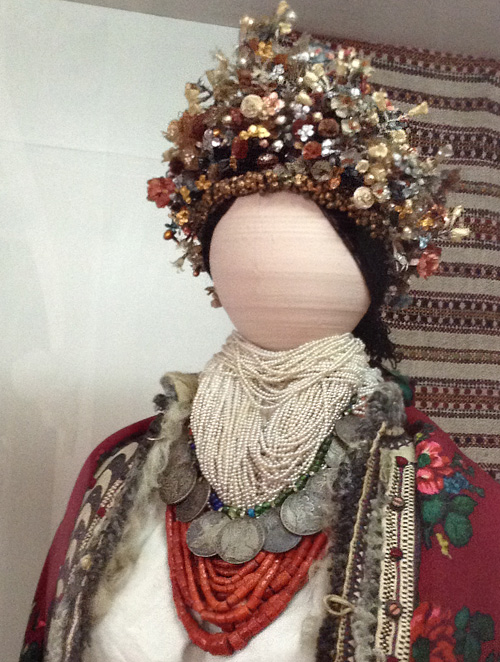 Combination of several coral necklaces, pearl necklaces, and a row of dukach coins. Wedding jewelry of a wealthy woman from Kolomyia district, Ivano-Frankivsk region, the beginning of the 20th century

Ukrainian women liked to mix and combine neck jewels made from different materials. They seldom used only one type of necklace when dressing for some festivities. On special occasions, females got as many jewelry pieces from their treasure boxes, as they could. It was totally ok to mix corals, metal neck jewels, and pearls or to combine glass beads with bead weaving necklaces, and stone necklaces. But in a day-to-day life, they preferred only a few rows of corals or a narrow bead weaving necklace.

The vintage female necklaces in Ukraine were often made from brass. The necklaces included coins, brass crosses, or other tiny brass figurines. 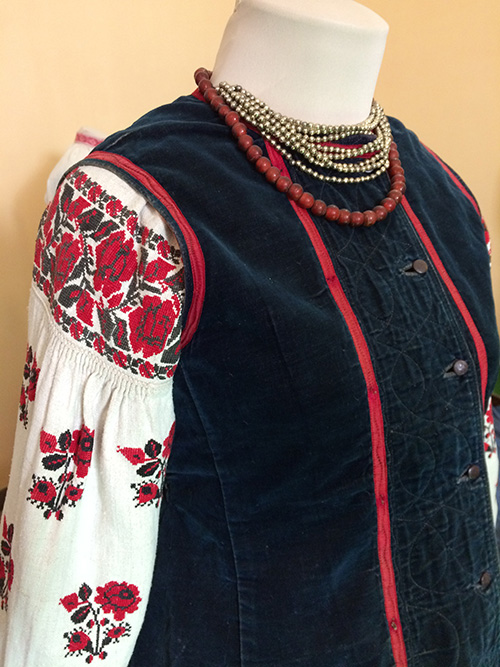 Combination of a metal beaded necklace and a stone beaded necklace (made from smalt). Central regions of Ukraine, the early 20th century. Festive jewels for a poorer woman

One of the most widespread metal jewelry pieces was called “dukach”. It is a large (preferably, silver or gold) coin with an ornate setting. The setting may include short chains, gems or semi-precious stones (poorer females were content with glass gems), and beautiful engravings. 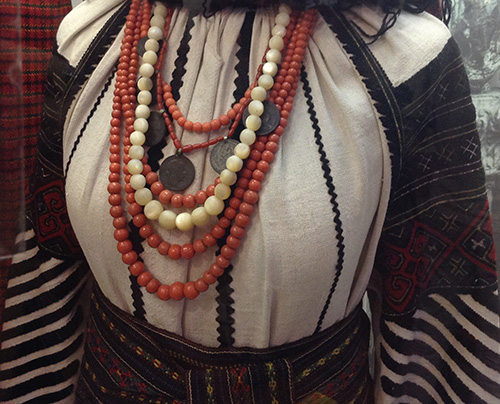 Several rows of stone necklaces made from cheaper smalt (fake coral), a string of coins combined with real coral beads, and a necklace made from mother-of-pearl called “balamuty”. Borshchiv district, Ternopil region of Ukraine (western part of the country)

In Bukovyna region (western part of Ukraine, close to the border with Romania), women used a jewelry piece called “salba”. It is a piece of fabric, with neck ties, densely covered with coins. Similar jewels were popular among Turkish, Tatar, and Moldavian people.

Amber was a pretty popular material for jewels. Amber necklaces were used by women in Kyiv region, and several western regions of the country; mostly, because these were the areas where amber was extracted. The amber beads usually were large and of somewhat irregular shape. Amber necklaces often were paired with coral necklaces. 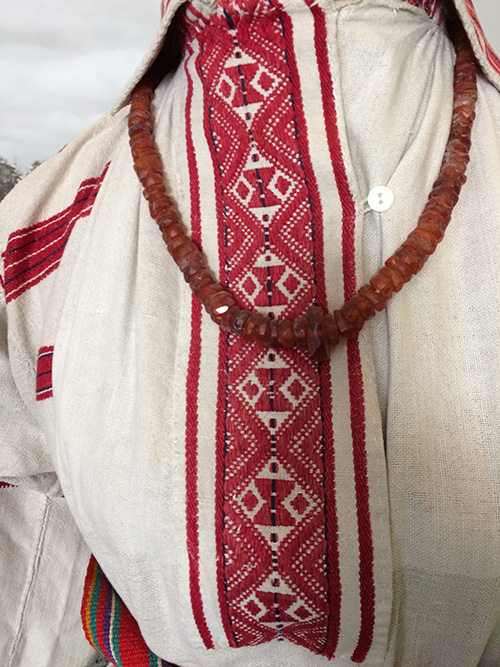 This kind of jewels dominated in Ukraine thoroughly. Almost every woman had at least one row of corals in her possession. Even in modern days, local females prefer coral necklaces to any other stone beads. 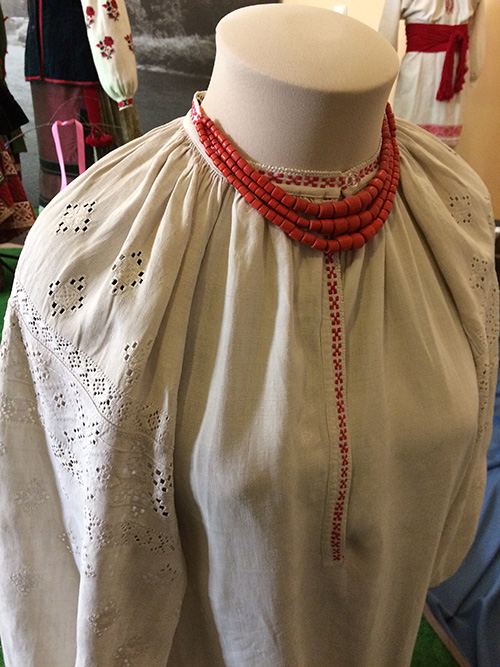 Vintage coral necklace used in central regions of Ukraine, the early 20th century. Necklace for everyday usage. The beads have a cylindrical shape; the bigger ones are situated in the middle of the row with smaller ones at the ends

There was a great diversity of coral necklaces used by Ukrainian women. They could consist of cylindrical beads of the same shape, round beads of different shapes (bigger ones were situated in the middle of the row with smaller ones at the ends), bright red or grayish beads, coral only or complemented with metal decorations and crosses, etc. 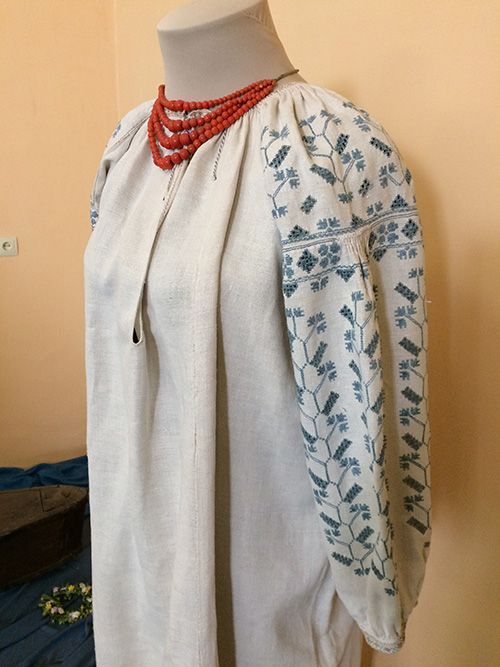 Vintage fake coral necklace (cheaper stone necklace made from smalt) used in central regions of Ukraine, the early 20th century. Necklace for everyday usage. The beads have a round shape; the bigger ones are situated in the middle of the row with smaller ones at the ends

Coral necklaces are even believed to display the health issues. As they were worn on a daily basis and had a close contact with the skin, the beads could change their color (become a duller shade or more grayish shade) if the wearer’s health got worse.

Glass bead necklaces were among the most expensive non-gold jewelry in Ukraine. That was because the beads were imported from Venetia. And also, because they were handmade and hand painted. Only the wealthiest of women could afford such jewelry pieces. Even today, Murano glass is highly estimated around the world.

Simple glass necklace from Polissia region (northern part of Ukraine), the beginning of the 20th century. Necklace for everyday usage. These tiny glass beads were made not from Venetian glass but from ordinary glass, so they were comparatively cheap

Venetian glass beads were remarkably beautiful. They could be painted in various colors but the most popular were blue, black, yellow, and red. The patterns painted on the beads were also diverse: floral designs, dotted patterns, geometrical prints, and so on and so forth. 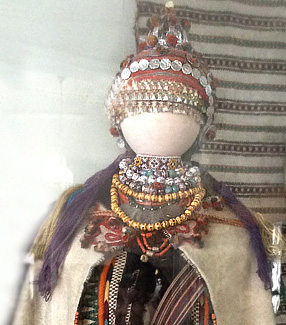 Combination of a coral necklace with metal decorations, several rows of Venetian glass beads, and a row of dukach coins. Wedding jewelry of a wealthy woman from Verkhovyna district, Ivano-Frankivsk region, the beginning of the 20th century

These necklaces were as expensive, as the glass bead ones. The pearls were also imported to Ukraine. So such jewels were rare. If the woman wore pearls, it meant she was extremely rich. In most cases, females wore only one row of pearls, but they complemented it with various other kinds of neck jewelry (corals, dukach necklaces, glass beads, etc.).

These necklaces were very widespread among Ukrainian women. At first, such jewels were rather expensive (because the beads were imported from Murano island), but later Czechia started to mass produce them and the price dropped. When the bead weaving necklaces became accessible, almost every female had it in possession. 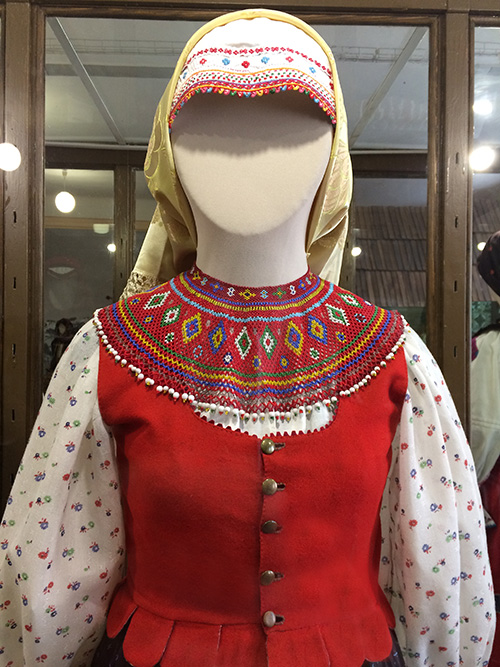 Wide bead weaving necklace from Lemko region of Ukraine (part of Transcarpathian region, western part of the country), the early 20th century. The necklace is decorated with colorful geometric patterns

The shape, color, pattern, and size of the traditional bead weaving necklaces were various. Women wore chokers, collar necklaces, etc. The patterns often were symbolic and transformed simple jewelry pieces into amulets and protection items. But ordinary floral and geometric patterns were used as well. 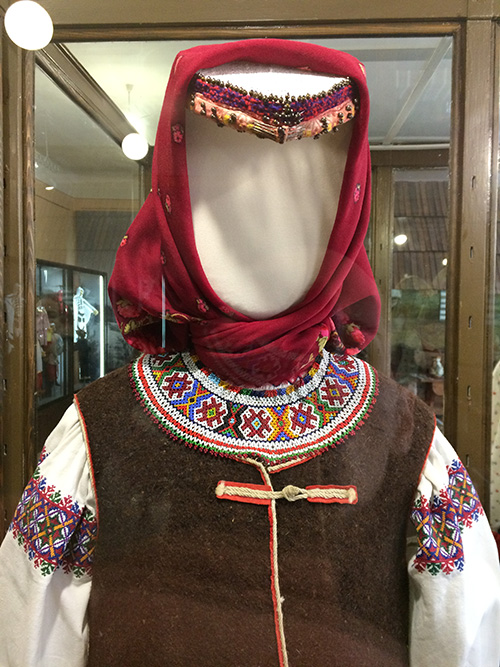