What the dead wore? Female funerary fashion of Northern Estonia in the 12th century

Funerary fashion is a very interesting and exciting branch of fashion history. About some trends and traditions we find out due to the old photos and paintings, but also, a great chunk of knowledge comes from the grave. Archaeologists dig out a lot of artifacts from ancient burial grounds, so they can study them and make educated assumptions as to what did people wear to the grave. Some burials have survived in such a good shape that we can create replicas of those ancient burial outfits. Like the one we’ll tell you about in this post.

The article is based on a lecture by Riina Rammo from the University of Tartu, Estonia

Archaeologists often study ancient graves to understand the lifestyle of people long gone, their cuisine, clothing, tools, weapons, etc. Because at all times, humans buried their dead with various objects they believed useful or significant. Even today, we sometimes put memorabilia to our relative’s coffins. And in the past, it was a traditional and important thing to do.

Of course, not all of the items originally put into a grave survive centuries or even millennia till they’re dug out. Some of them disintegrate with time – fabrics, wood, food, and other pieces. But metal, glass, pottery, and similar materials last longer. Such fabrics and materials as wool, leather, and fur survive longer than linen, cotton, lace, and other plant fibers. This depends on the climate conditions as well.

By far not every grave gives scientists something important to study. But when they find a truly informative burial, the world gains a lot of knowledge from it.

The archaeological site we’re talking about in this article is wonderful. It is from Kukruse village, Northern Estonia. And it is dated the 12th century.

It’s interesting because the woman buried there was dressed in a beautiful attire typical for that time and territory. The fabric itself hasn’t survived (though, it was typical to wear dark blue clothing, so the scientists assumed this attire was the same), but jewelry, pieces of decoration, and a number of personal items were in mint shape. So, Estonian scientists were able to make a reconstruction of the woman’s attire, using the artifacts from the grave and the knowledge about that period’s costumes.

And this is how the costume looks like. In the first pic, you see the drawing of the woman’s remains, with all her jewels. The second image is a sketch of her dressed in a presumed burial costume. And the last photo shows the modern reconstruction of her full attire. 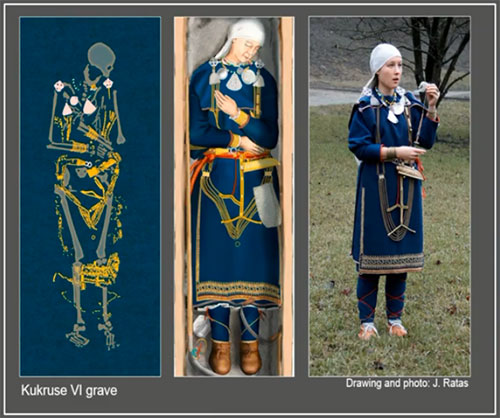 The scientists determined that the buried woman was 17-20 years old, so this is a young woman’s costume.

Interesting (though, rather typical) fact is that the woman’s apron itself disintegrated but the beaded adornments survived, which allowed to create a very accurate replica of her beading. By the way, this is an extremely useful part because ancient ornamentation patterns rarely survive to our time. And in this instance, we can be absolutely sure that this beaded design comes from the 12th century and was used at the time. 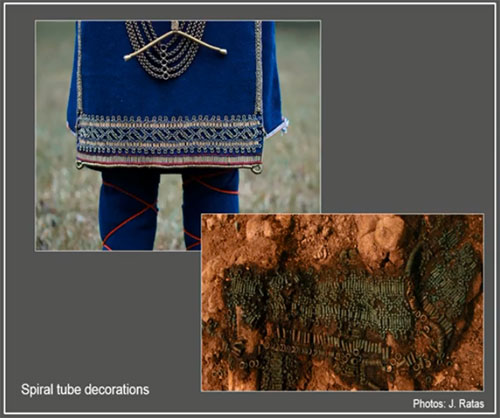 Also, the woman’s leg wrappings could be recreated due to the remains of her original footwear. 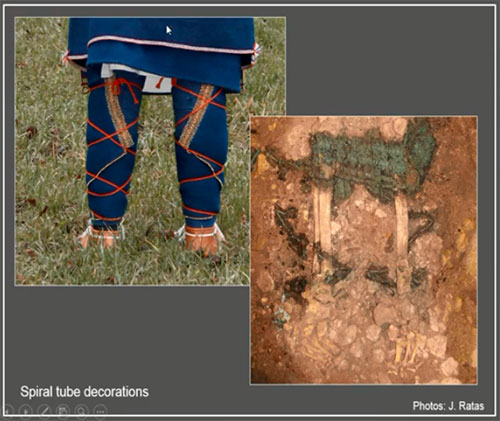 The jewelry pieces and metal accessories also survived. Her breast chain and necklace are particularly lovely. 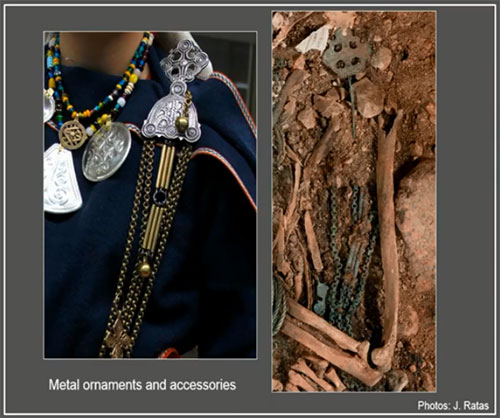 The same we can say about the buried woman’s belt, small knife, and hanging metal accessories attached to the belt. 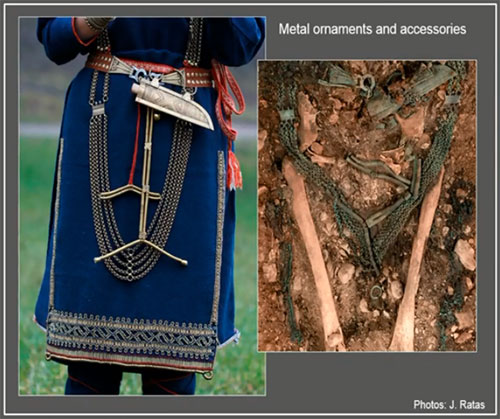 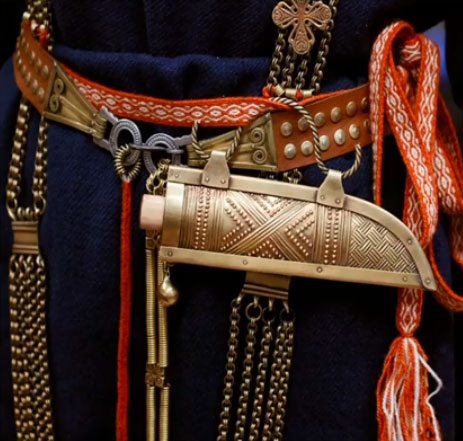 It seems strange but this reconstructed costume is very similar to the 18th-century clothes of Votes or Vods ethnic group that lives in a neighboring territory. It tells us that the local clothing traditions didn’t change much during the centuries. Modern folk dress from the area looks very similar to a 12th-century one.

Was the buried woman’s attire made specifically for her funeral? No, people buried their dead in their best clothing (often, wedding attire) that should correspond with the person’s status at the moment of the funeral. If it was a woman, she would have been laid to rest in clothing that represented her marital status (first of all), age, and social status. 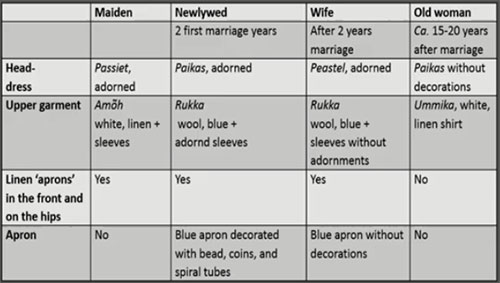 According to it, the woman buried in Kukruse village was probably recently married because she is dressed in blue clothing with a lot of adornments, has a beaded apron on, etc.