The variety of women’s national clothing in Portugal. Regional variations and features

The Portuguese traditional costumes are diverse and good-looking. Some of them even look a bit weird. But, as with most national outfits around the planet, there is an explanation to each variety, each shape, each design of dresses. Different regions of Portugal are characterized by different folk clothing – farmers had their specific garments, fishermen wore other clothes, the attire of cattlemen had another design, and so on. Let’s look at several Portuguese regions and compare their traditional female clothing. In this article, we don’t take men’s folk costumes because they aren’t as manifold and distinctive.

The drawings are made by Laura Costa, Portuguese painter and illustrator, and Elsi Gumier, postcard artist

The women in Alentejo wore a shirt, a skirt, an apron, a scarf, a hat, socks, and shoes. 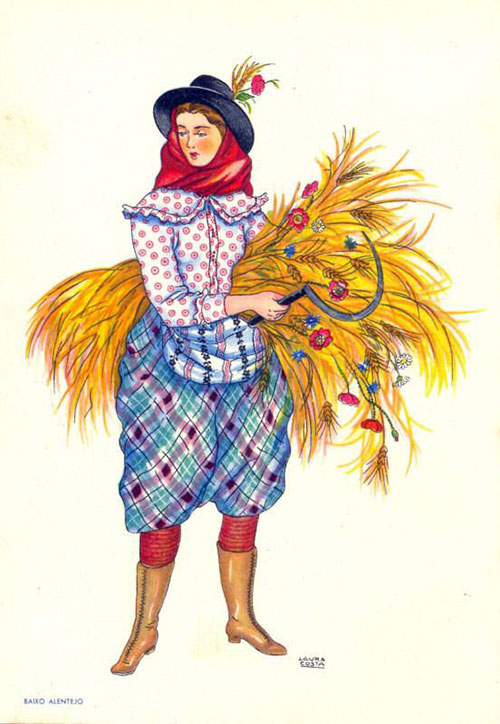 The local females worked in the fields a lot, so they needed a simple and comfy outfit that allowed them the freedom of movement. When they were working, they tucked their long skirts at the waist or made some kind of improvised trousers by pinning the hem between the legs.

The shirts were made from cotton, with a floral or striped print.

The scarf was worn to cover the head and neck from the hot sun, with a brimmed hat on top.

The local female outfit consisted of a blouse adorned with lace, a long skirt, a woolen apron, a long fringed shawl, and black varnished slippers worn without socks. 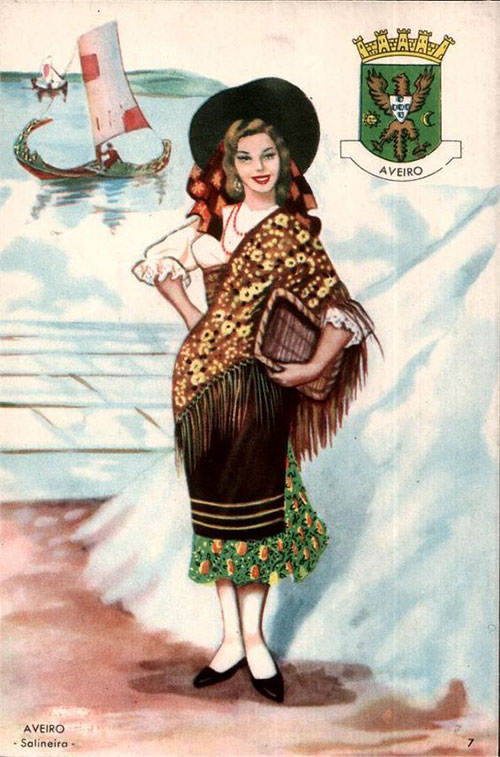 The blouse was usually white and had lace embellishments on the sleeves. The skirt could be rather colorful and bright.

The local apron was hand-woven from wool and it was usually brown. It is called “sergilha”.

The women in Aveiro-Salineira region liked large colorful shawls with long fringe at the ends. They were put on draped over the left shoulder.

Women in this area were known for carrying sea salt in special baskets on their heads (65-75 kg of salt!) from ships to the warehouses.

The women in this area (and also in several other regions, like Aveiro, Ílhavo, and Ovar) were called “tricana” because they wore a shawl made from cognominal fabric.

The female attire in this area consists of a white cotton blouse, a black ankle-length skirt, a shawl with silk trimming, a silk headscarf, white stockings, and black low-heeled clogs. 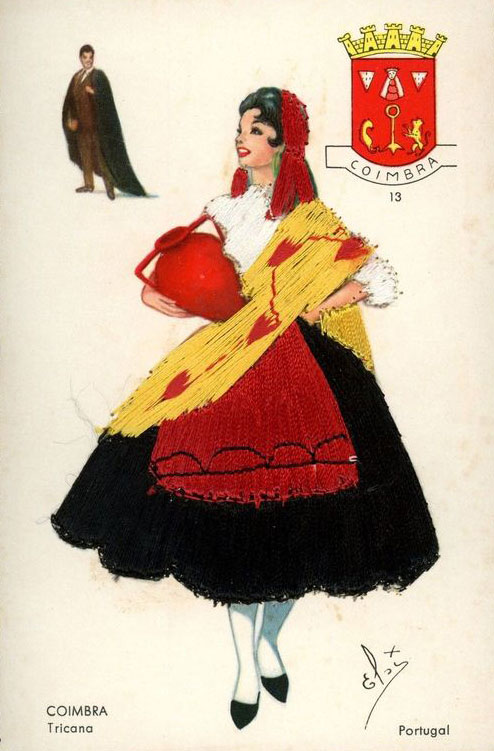 The blouse and stockings usually are white and adorned with pretty lace.

The skirt is long and wide, made from embroidered silk.

But the most characteristic garment is this region is a large shawl called “tricana”. It is usually dark-colored and embellished with silk trim. It could be carried just folded on one arm or worn around the shoulders, especially when a woman went into a church.

At first, “tricana” was the name of the fabric, which later referred to women wearing these shawls (up to the early 20th century). Usually, tricana shawls were worn by daughters of wealthy farmers for special occasions.

The Azores (Azores archipelago, to the west from Portugal)

In this area, women traditionally wear a white pleated shirt, a serge skirt, an embroidered white linen apron, a headscarf of the same color as the skirt, a black woolen hooded cloak, and buckled shoes. 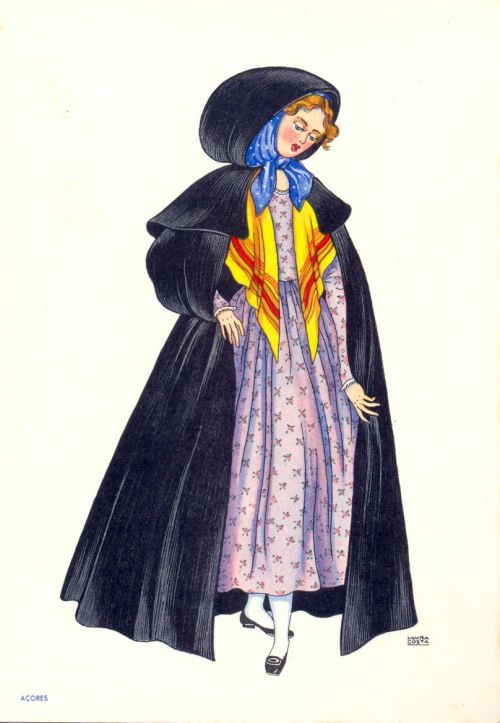 The costume is richly adorned with embellishments – lace on the shirt, trimmings on the skirt, embroidery on the apron, etc.

But the most outstanding part of the attire is the hooded cloak. It is black or dark blue, large (covers the whole body), made from wool, and has a very large hood worn on the head. This cloak is called “Capote-e-capelo” and dates back to the 18th century. Today, it’s mostly worn during traditional festivals and various folk and historical events.

The folk dress for women includes a white shirt, a wide yellow skirt, a red bodice, a black apron with ornamentation, and traditional clogs. The optional pieces are a large white lace collar and gold necklace with the traditional Portuguese heart. 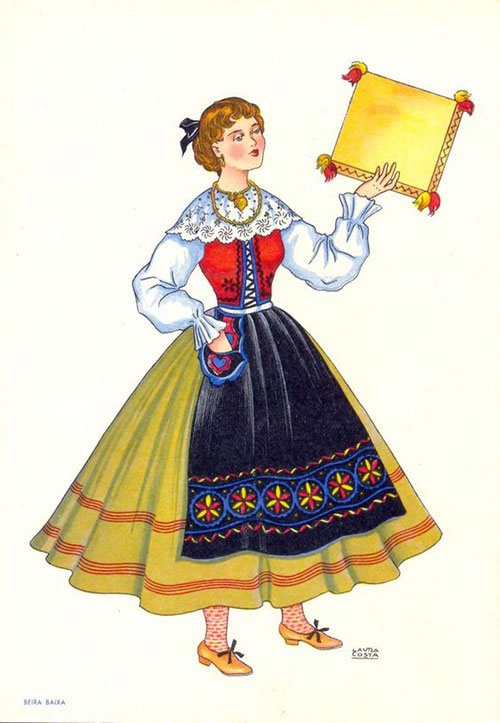 This outfit is pretty colorful. And the embroidered apron with traditional patterns and wide lace collar look amazing.

The female outfit in this area consists of a blouse with floral print, a flannel plaid skirt, two petticoats, culottes, an apron, a small round black cap with a single feather, a black veil, and a colorful scarf worn beneath the hat. 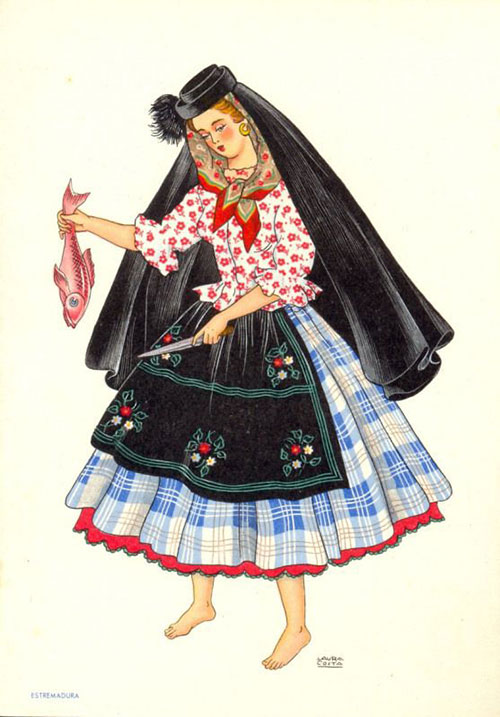 The skirt with petticoats make the silhouette very feminine and princess-like, though the fabrics are simple and natural.

The most curious garment is the headdress – to be more precise, the complex of headwear. It is a colorful headscarf, then a round hat made from black velvet with a black feather, and then a long black veil attached to the hat.

Madeira Island (Madeira archipelago, to the west from Portugal)

These are grape farmers, they grew and transported grapes from the island to mainland Portugal.

The women’s traditional attire consists of a white blouse, a colorful striped skirt, a red bodice, an oddly-shaped headdress, and short sheepskin boots. 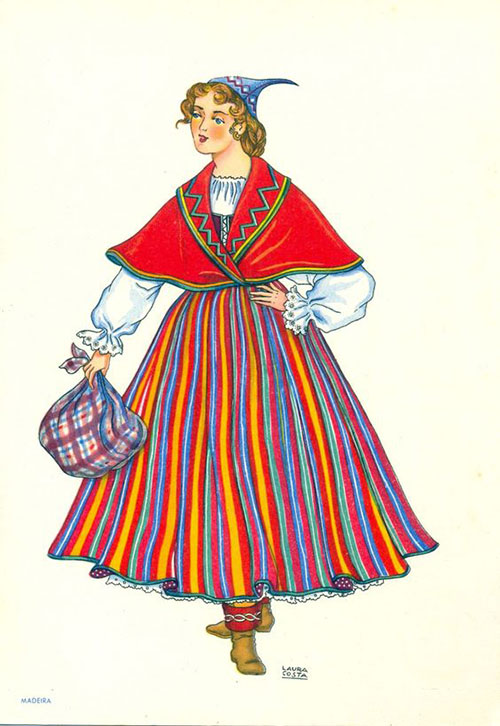 The skirts are multicolored and look very festive. They are usually wide and long.

The bodice has a special red cape worn around the shoulders. Looks a bit like bird wings.

And the headgear is really curious. It is a small pointy cap that reminds of a gnome hat. It is called a “pigtail cap” or “carapuça”.

The women in this part of Portugal wear a linen chemise with blue embroidery, a heavy skirt, a woolen apron, a bodice, two kerchiefs (one worn on the head and another around the shoulders), an accessory (separate pocket), knit stockings, and backless slippers. 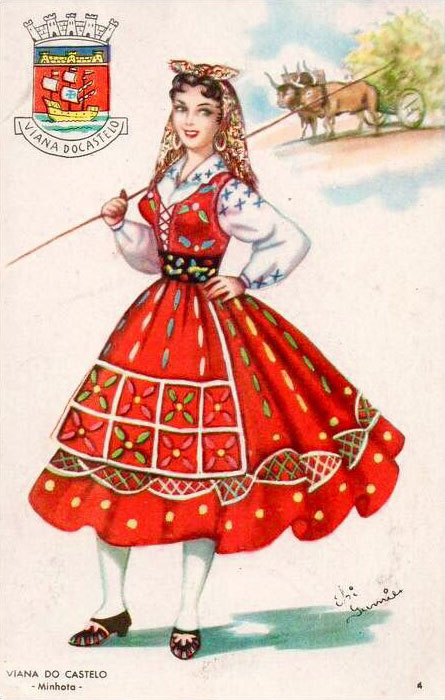 This costume is very bright and ornate.

The chemise has floral embroidery made with blue threads on the front, sleeves, and cuffs.

The skirt is called “saia”. It is sewn from heavy wool or linen. The skirt can be plain (black, red, green, or blue) or have patterns woven into the background. Red skirts are traditionally worn by young girls or for happy occasions. Married women preferred the blue color.

The bodice is called “colete”. It is traditionally sewn from 2 parts – upper matches the skirt and lower is black.

The apron is called “avental”. It is woolen, hand-woven, and has very bright patterns that cover the whole apron.

The pocket is worn as a separate piece attached to the belt. It is called “algibeira”. And usually, it is very pretty – shaped like a heart and adorned with embroidery.