Austria is one of those countries where dirndl dress and lederhosen are traditional garments, along with Switzerland, Liechtenstein, Bavaria region of Germany, and Alpine regions of Italy. Austrian women, both young and elderly, continue to wear dirndl for various special occasions even in the 21st century. Believe it or not, but the national attire is greatly supported by the Catholic church as well – besides the folk dress being used for church holidays, there is also a so-called “heiligen tracht” or “holy folk costume”.

A dirndl dress is a female attire that consists of a blouse, tight-fitting bodice with a low neckline, a wide skirt, and an apron. This style of folk outfit is popular in this particular area of Europe since the 16th-18th century (in different regions, it appeared at different time).

In Austria, the dirndl dress continues to be extremely popular even today. There are a number of modern fun and curious traditions connected with dirndls. For example, jumping in the water wearing a full dirndl outfit. But let’s talk about these various traditions in order.

Women’s dirndl is a large part of Austrian culture. This apparel was used by peasant women here for centuries. Simpler dirndls could be used in everyday life, while females took out their ornate and finer dirndls on special occasions, like church holidays and ceremonies, weddings, different festivities, etc. 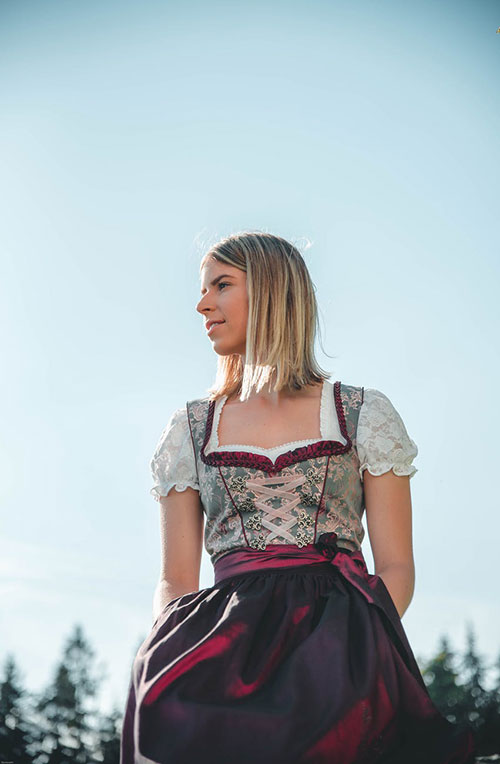 Today, of course, a dirndl is rarely worn as a day-to-day outfit, it is mostly reserved to festive occasions. Modern Austrian women wear dirndls for weddings, local holidays, festivals (and not only folk festivals but, for example, wine festivals or firefighting festivals as well), fairs, and plenty of similar festive events.

By the way, dirndls can look very modern and up-to-date. These are not those traditional costumes that change little throughout the centuries. Contemporary Austrian dirndls are made from modern fabrics, adorned with modern trimmings, complemented with modern accessories, and so on.

As this folk attire is considered a national symbol of Austria and represents the local folk culture, dirndl is also often used by staff in restaurants, stores, wineries, hotels, offices as work uniforms. That’s why tourists can easily find women dressed in a dirndl everywhere.

Interesting thing about a dirndl dress is that this attire is strongly supported by the Catholic church. And has been for a long time. People often wear a dirndl to the church or to various ceremonies, church holidays, etc. In the Tyrol region of Austria, there is even a heiligen tracht (literally, holy folk attire) that is worn to church ceremonies, and you aren’t allowed to use it when you’re drinking alcohol, for instance, when you’re going to a party or celebration with beverages. You can’t taint this costume with drinking. 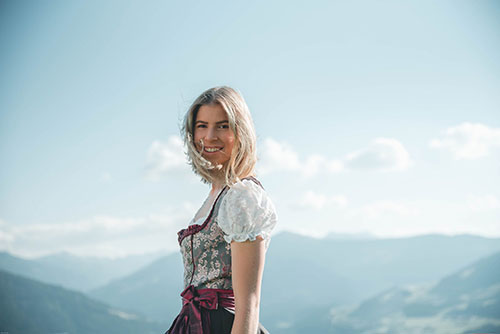 But you should understand that a heiligen tracht or any other dirndl ensemble worn to the church is nothing like those extravagant costumes worn during Oktoberfest or similar festivals. It should be much more modest, with longer skirts and blouses that actually cover the woman’s chest.

Although, dirndl dresses are not only for church visits and folk festivals. Young Austrians found a way to entertain themselves and support the tradition of wearing a national costume. They invented a joyful event called “dirndlspringen”, where young women jump, dive, or even just step in the water (pool, lake, river) from a springboard wearing a dirndl. The judges reward the winners – most graceful and pretty girls. Imagine how great and fun the photos from a dirndlspringen are, with nicely dressed women in the process of jumping in the water! This event proves that old clothing traditions can easily mix with the modern culture and do good for both.