Cambodian folk dress and Khmer folk dress is the same because the Khmer people are the native inhabitants of the Cambodia. 97% of Cambodian population are Khmer. So, let’s find out what are the traditional garments worn by the Khmer people. Actually, their folk outfits are so interesting because it’s one of a few cultures where the male and female traditional garments look very similar. Especially, the bottom piece called “sompot”.

The costume consists of three parts – top (a shirt), bottom (a sompot), and an accessory – a checkered scarf called “krama”.

Some of Khmer women’s tops look like a strip of fabric that covers only breasts and leaves arms, shoulders, and abdomen bare. Other garments are long-sleeved shirts with stand-up collars. Also, there are sleeveless vests or tube tops that cover the chest and stomach. Or blouses with short puffed sleeves.

Here are a few native names of traditional tops: “av neang nov” – long-sleeved female shirt; “chong pong” – one of the oldest pieces, rectangular strip of fabric that is tied around the chest; “av pak” – modern variant of a folk blouse, very ornate, the cut is similar to Javanese kebaya.

With male shirts today, it’s much easier – they are usually long-sleeved shirts or jackets with stand-up collars. But during the centuries, national Khmer garments changed a lot, so there was a time when men also wore wrap-around tops, tube tops, and went topless as well. The latter they do these days, too, but only for informal occasions. 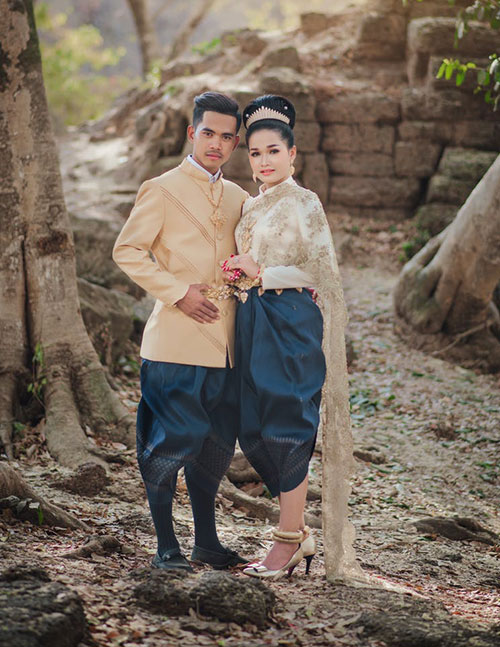 The traditional bottom garment used by both men and women in Cambodia is called “sompot”. It is a long rectangular piece of fabric wrapped around the lower body and, most often, sewn together to resemble wide trousers. Though, there are, of course, some variations in design. Some sompots look more like a skirt, others like pants.

Usually, a sompot has a knot at the front made of the remains of fabric left after it is wrapped around the body. This knot adds some extra charm and is a typical feature for this Cambodian wrap-around garment.

By the way, the cuts of a sompot are pretty unisex – you can see wrap-around skirts on men and sompots worn trousers-style on women.

As we’ve mentioned, there is another important part of a Khmer national dress – a krama scarf. Actually, it’s what distinguishes the Khmer folk attire from neighboring Thai, Lao, and Vietnamese. This accessory is a very old acquisition of the local folk costume and it is still fashionable. Partially because this checkered scarf is extremely handy in everyday life. It’s not just another stylish accessory. It can be transformed into a headscarf to protect the head from the hot sun, a hammock for a baby, a towel, a piece of fabric used to climb trees, or even a doll for children to play with. Really multifunctional accessory!

Different ways of using a krama