The main Uzbek folk garment traditionally used by everybody in this country was a robe. These open garments could be made from different fabrics, adorned with various decorations and details, created in different designs, but they suited men, women, and children in Uzbekistan perfectly. Of course, every region or even town had its own peculiarities in traditional fashion, but a robe of some style was an obligatory part of an outfit. Also, there are several curious and unique features of folk clothing for children in Uzbekistan. Find out about them below.

The male outfit usually consisted of a shirt, trousers, a robe, a sash, a headdress, socks and shoes, and outerwear (usually, another robe but coarser and warmer). The inner robe was belted and the outer just worn open. 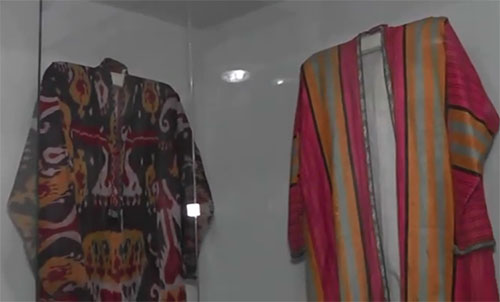 Interesting fact! Uzbek vintage male robes that we see in museums are usually very colorful and bright. They have yellow, pink, green, white prints, etc. It was totally acceptable and common for a man to wear a pink robe, unlike we’re used to these days.

A lot of outer garments were rather loose and wide, both men’s and women’s. The sleeves were loose as well, they didn’t restrict movements, and also, you could wear several pieces of clothing underneath, as people wore multilayered costumes in the past. Another reason was to show off your wealth – the fabric was costly and if you wore garments made with a lot of fabric, it meant that you were rich. 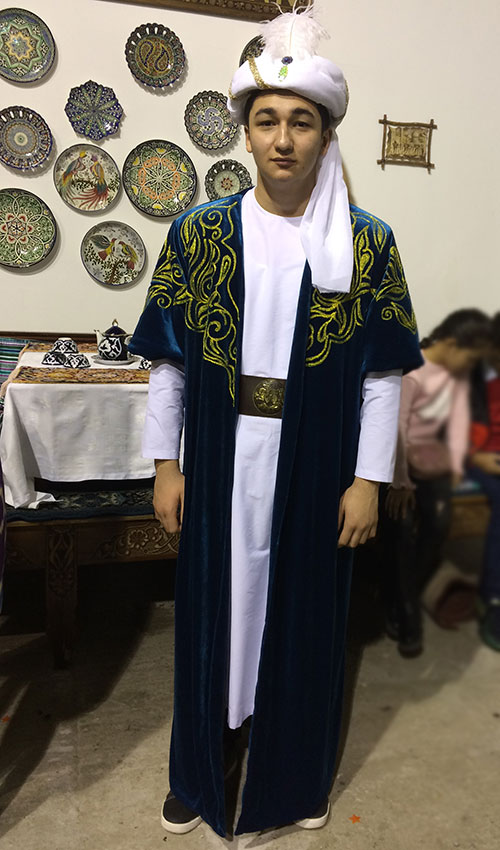 Popular male headwear were turbans wound around skull-caps. For a festive occasion, turbans could be made from expensive fabrics, like brocade and silk, and gold embroidered.

The female attire traditionally consisted of an underdress, a dress, a robe, a headdress (often, it was a complicated set that included a burqa or some other Muslim headcovering), socks, and shoes.

Uzbek traditional women’s dress was usually open at the front. It was never worn on bare skin – a white underdress with a stand-up collar and long sleeves, made in very modest design (as much skin as possible needed to be covered), was put under the dress. These dresses could be made of silk, cotton, velvet, and other fabrics.

As we’ve mentioned, female robes were loose, with wide sleeves. Sometimes, women had to wear up to 7 dresses underneath – for official events. And each sleeve had to peek under the next layer so that everybody saw how wealthy a woman was, how many festive, beautifully decorated dresses she could afford to have. The fabric was soft and draped lovely around the body, so all these layers didn’t cause any inconveniences. By the way, even plump women looked gorgeous in such a costume because many layers of fine fabric created a rather forgiving outfit that hid any imperfections. 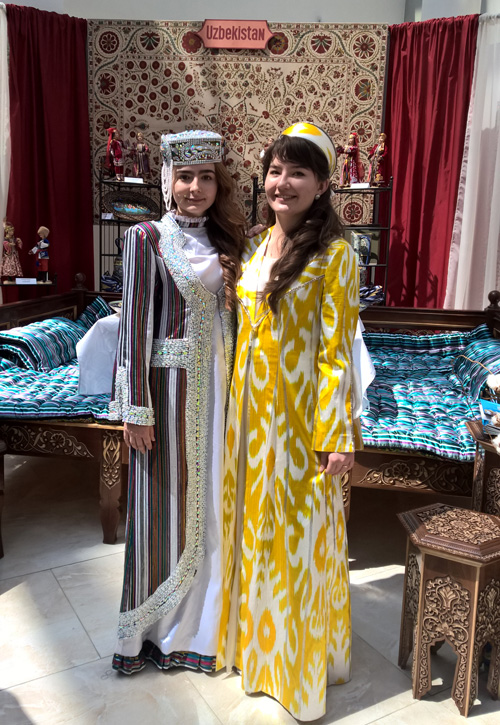 Uzbek girls in modern folk costumes. The patterns are traditional for Uzbek textiles

In northern regions of Uzbekistan, where the climate is colder, women used dresses and robes that were narrower to keep the warmth inside. Also, outerwear could be trimmed with fur.

On top of a dress, a thicker robe was worn. The fabric of it traditionally was intricately decorated with patterns – this garment looked really ornate. The sleeves could be short or long. Some robes were thinner and women used them inside of the house, others were thick and warm – for outdoor use, like modern coats. Such robes were made from wool, brocade, velvet, silk, etc.

Festive clothes of wealthy people in Uzbekistan were often gold embroidered or silver embroidered. And the richer a person, the more costly embroidery they had. Their garments looked ornate and beautiful, and the needlework patterns were full of protection symbols, along with simply cute images.

Married women wore a very pretty and interesting headdress – it was a skull-cap with a long piece of fabric at the back – it covered the braids. Married Uzbek females (just as we see in various cultures around the world) had to hide their hair from strangers. Only her closest family saw her hair loose or just braided. When she went outside her home, she covered the hair with different headpieces. If to talk about this particular skull-cap, the fabric at the back was wrapped around the braids and pinned or buttoned. But the fabric itself was ornate, adorned with embroidery, gems, jewelry, and other decorations. 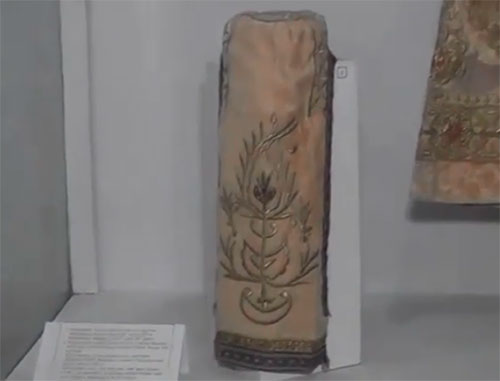 But, of course, Uzbek women had a wide variety of headpieces according to the region of origin, season, marital status, social class, and so on. They used kerchiefs, different headcoverings, skull-caps, etc. 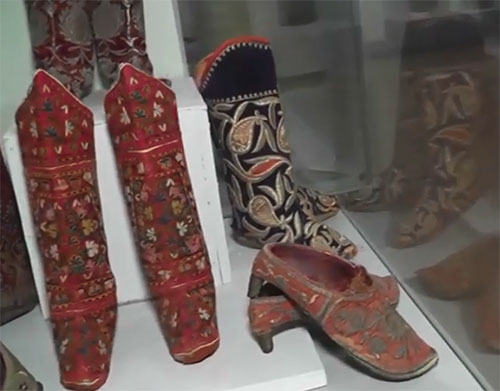 Female footwear for special occasions was similar to male shoes – soft high boots (made from soft leather or fabric), over which low shoes were worn. The leather overshoes were coarser and usually had heels.

Uzbek children wore tiny versions of usual clothes, but they often were decorated with protection symbols against the evil eye, etc. A huge role in kids’ clothing was reserved to protection and various superstitious beliefs.

For example, the bottom of kids’ robes wasn’t stitched up. The edge of the fabric was left as it was. This was done because people believed that stitching would shorten the life of a child. Interesting thought, by the way – we haven’t met anything similar in any other culture yet.

The children’s robes were often embellished with applique, patchwork, and other similar techniques. Embroidery was used as well but rarer.

Also, clothing for kids was sometimes made from leftovers after sewing adult garments, so everyday kids’ clothes could be made from mismatched pieces of different fabrics. Though, festive garments were made from normal pieces of cloth.