Korean traditional Ramie Cloth weaving. One of the most complicated and hard-working crafts in Korea (+ video)

Traditional Korean summer clothing is often made from ramie cloth. It is similar to linen by its qualities and fits perfectly in warm and humid climates. Many Asian countries (Japan, China, Indonesia, India, Korea, etc.) used ramie for centuries to make ordinary and luxury outfits. But the craft of producing this “live textile” requires large amounts of time and hard labor. You should definitely see for yourself.

The Hansan Island of Korea is famous for its crafts, one of which is the ramie cloth weaving. Today, only several skillful craftswomen here are still practicing the art of producing ramie. And here is what the process looks like.

Hansan in Seocheongoon Chungnam province of Korea is known for its advantageous natural environment for growing ramie. Because of its quick exhalation and absorption of moisture, the ramie cloth used to be called a “live textile”. Ramie cloth is an extremely important fiber in Korean culture. This fabric was first introduced to Korea during the Three Kingdom period (appr. 57 BC – 668 AD). According to the records, ramie cloth was popularized during the mid-19th century. And according to a document from the Joseon dynasty, ramie cloth made in Hanson was renowned for its excellent quality.

“The Hansan region has the sea breeze coming from the ocean, rich soil, and a warm climate. High-quality ramie is cultivated because of such positive regional environment”, explains Gwon Young Suk, member of Korean Advisory Committee. 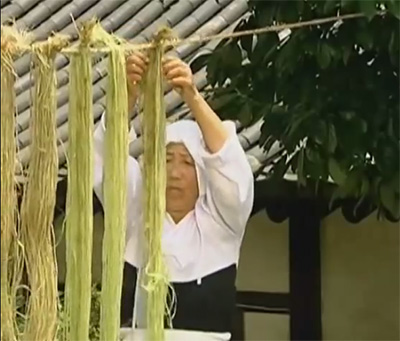 Two Korean people – Moon Jeong Ok and Bang Yeon Ok – are the famous local skill holders who know how to make the ramie cloth and are happy to share with us. Moon Jeong Ok was designated as an important intangible cultural heritage with an aim to preserve the manufactured technology since 1967. Bang Yeon Ok became the second skill holder in 2000.

Ramie is harvested three times a year – the second harvest of ramie is best in quality. Ramie skin is peeled off once ramie barks are ready. 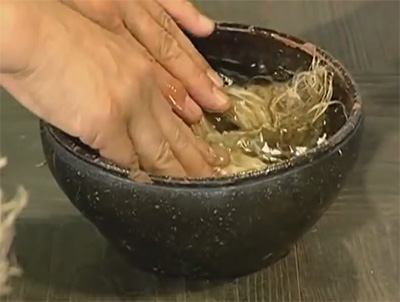 Ramie knives are used when peeling off the skin of ramie plants. Unlike other knives, ramie knives have their blades placed to the back of the knife. Peeled off ramie plants are dried on a sunny day with good ventilation. As time goes by, the color changes into light brown. This thick raw ramie is used for the original cloth.

The next step is lancing. The quality of cloth depends on the thickness of thread, thus must be cut as thin as possible. Two front teeth are used to cut the ramie cloth. This is an extremely painful and difficult process that at times, women taste blood in their mouths. 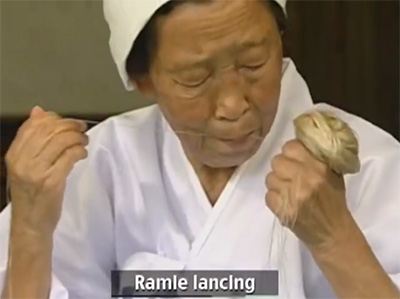 Cut ramie strands are spin to make a thread. Threads must be consistent in quality and the Hansan ramie spinning technique is superior in that it always achieves uniformity.

“When spinning, you have to put the tail and head part together, and pull it a little bit so that the front is short and the tail part is long. Then, you rub it. If you put it on your lap and rub it with one hand while holding it with the other, it becomes softer and silkier”, says Bang Yeon Ok, the skill holder. 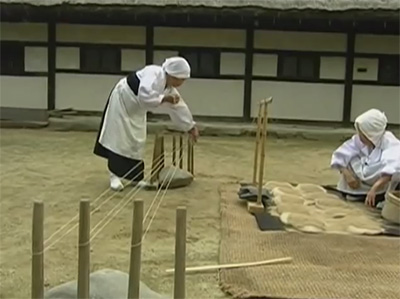 The threads are then put in regular sizes, tied cross-shaped, and made into a ramie wrap. Length-setting and skein-making for ramie thread is a process to set the length and density of a ramie thread. Wrap ties and threads are not used to hold up the wrap while weaving are differentiated. The hand movement to distinguish these two threads looks like shooting birds away – this process is also called “shooing birds”.

The unit determining the density of ramie is called “sae”. One sae has 80 strands of thread that is 30 centimeters wide. 10 saes are weaved with 800 strands of thread. The more the number of sae, the better the quality. Once the raw threads are prepared, they are inserted into a yarn guide. Intense concentration and perseverance is required in order to insert the threads correctly.

The next stage is starching. Blister on pasted paper is spread out on the thread and dried on low and steady ash fire. This stage increases the strength of the threads and goes on until evening since morning. 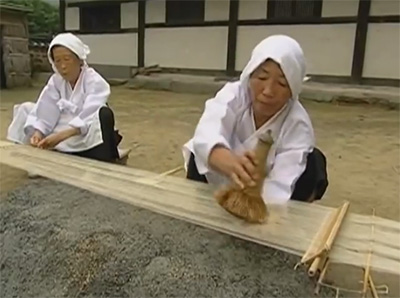 Once the threads are ready for use, after days of preparation, the weaving process begins. It is only after the delicate touches of a woman are applied on one thread to the small instruments of a loom that the cloth is successfully weaved. 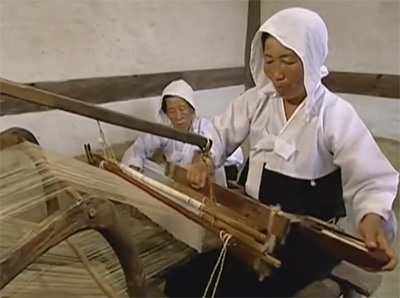 Ramie cloth has two lives. One is when it is first created by the master who trims and cuts ramie plants for use, and the second life starts when women weave the ramie threads into a cloth. The soft and valuable cloth from nature, ramie cloth is the essence of Korean delicacy and beauty.