Miao embroidery is the only native written language Miao people have

The Miao people, who live in China, pass their legends, traditions, and history with a help of embroidery – they don’t have their own written language. The Miao embroidery patterns are diverse and symbolic. Also, the craft of making a Miao folk costume is so time-consuming that it can take the whole life, or even several generations, to make one. But the result is absolutely stunning. Their clothing pieces are so bright, rich, and beautiful that you can spend hours examining them and singling out the images and symbols in the embroidery.

Miao embroidery has always been hailed as a treasure in the world of garment. Women of Guizhou create a colorful and childlike fantasy in a bold and exaggerating way with a combination of techniques. The Miao custom featured by calm authentic mystic and gorgeous styles are displayed entirely on their holiday dress.

“One feature of Miao embroidery is telling their national legend in embroidery on their clothes. Since the Miao people don’t have their own written language, they take needle as pen, thread as ink, and cloth as paper to pass on their centuries-old national legends by embroidering them on the clothes. Simply a living story”, says Ying-Feng Huang, President of Evergrand Art Museum. 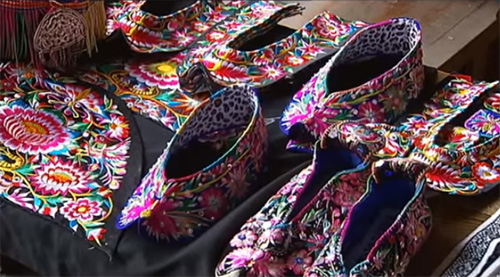 Huang Ying-Feng, a collector from Taiwan, is dedicated to the protection and development of the Miao embroidery. After 20 more years of survey in the field, in his eyes, the Miao embroidery is no longer exquisite attire but a historical book written without characters. These elegant embroidery works can be appreciated from different angles, such as the angle of technique or historical elements of the patterns.

As legend has it, that long time ago when the world was in peace, a butterfly was born from the trunk of a maple tree and she fell in love with bubbles in a dramatic way. In consequence, the butterfly laid 12 eggs of which 11 turned into natural features under heaven respectively. However, the last one after three years of incubation still remained intact. The butterfly asked the fairy bird Jiyu Bird for help. Another three years past, the ancestor of a human being named “Jiangyang” was born. Hence, the Miao people worship butterfly and believe it is the ancestor of the universe, calling it Mama Butterfly with great respect.

“You can see a great variety of patterns from Miao embroidery. The Mama Butterfly mentioned earlier is the legend about our ancestor. The maple tree is the guardian of our village. So, in general, butterfly and maple tree are the main patterns in Miao embroidery”, explains Ying-Feng Huang.

To win their survival, the Miao people waged constant struggles against natural disasters and outside invaders. In ancient times, the story of Jiangyang, who killed the vicious dragon and saved people, was widespread. 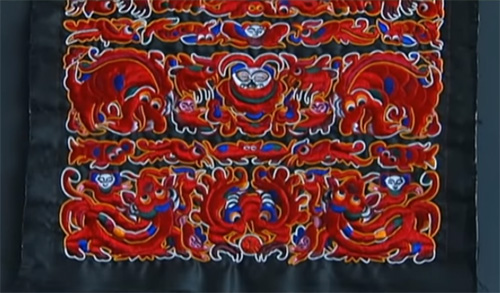 From the national wear of people who live in Nayong County, Guizhou Province traces, showing their struggle against all adversities, still can be seen.

“Our Miao clothes are quite unique. When open, it looks like a town surrounded by walls. In wartime, it will be undressed and put into the air as a flag”, says one of the locals. 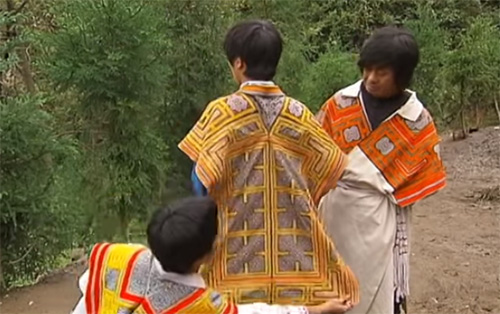 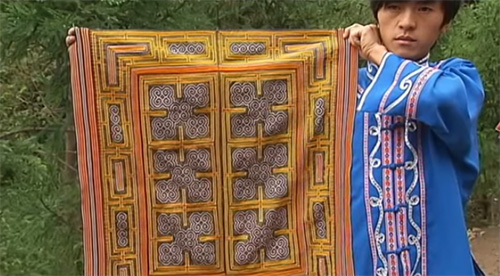 In Miao embroidery, curly patterns are commonly seen. When asked, the woman embroiderer always replied like that: long time ago, there was no sky and earth and the world looked like this. So, these patterns convey the description of Miao people towards the creation of the universe.

“In ancient times, there were 10 suns and 10 moons in the sky which were reflected on embroidery works. Then, the ancestor of a man appeared and shot down the suns and moons with arrows, until there was only 1 sun and 1 moon left in the sky. That gave rise to the present day world”, adds Ying-Feng Huang. 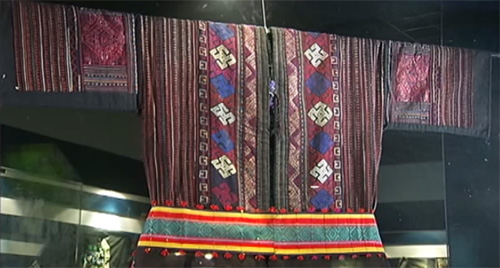 It’s also a tale about their ancestor. Afterward, the clever Miao women took this story into the patterns. Where did the patterns come from? – They came from their imagination.

The subject of Miao embroidery patterns expressed Miao people’s simple world view and took down their dreams towards a carefree life which were imbued into the embroidery works in a reserved way.

“Pomegranate flowers are common in Miao embroidery works. What features do they have? We all know, they are red and rich in seed. Multiple seed means thriving offspring, and that’s why they embroidered so many pomegranate flowers. People also believe that it’s directly related to procreation worship”, says Ying-Feng Huang. 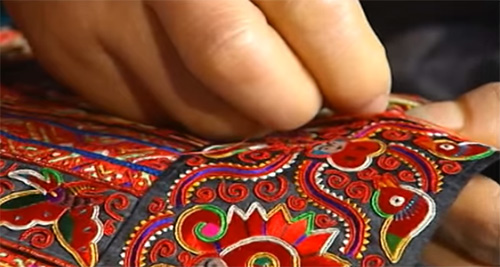 According to the legend of the Miao, the Miao dragon was born out of the egg of Mama Butterfly, standing for luck, wealth, and power. The Miao dragons don’t have fixed color and shape but they all look lovely. Different from Han people’s understanding about a dragon, the Miao dragon serves as not the exclusive symbol of imperial power. Because the Miao people follow the idea of “Animism Equality of life and Harmonious Universe”, the patterns of a dragon are adored by the common Miao people.

– For a piece like that, how many days it will take to finish? 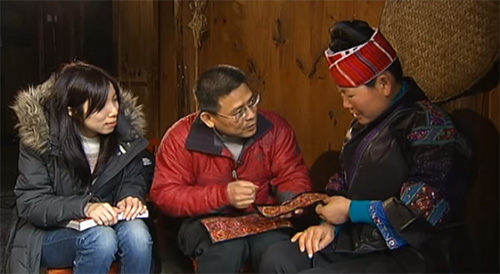 To make a formal dress, according to this standard, at least it will take 4 or 5 years to finish. And at most, it will take one’s entire life. Time-consuming like that, it is common that a formal dress is accomplished by several generations. So, for a fine embroidered dress, the auction price can reach several hundred thousands Yuan.

There are quite a number of taboos for Miao embroidery, including baby crying, frog croaking, and hand sweating, and so on. The Miao people established explicit customs to keep their mind clear when doing embroidery. In a sense, Miao people do the embroidery like practicing the Buddhism. Only absolute absorption can produce fine works. So every Miao embroidery work is unique and non-duplicated.

“Taking the garments patterns as a whole, the Miao people boast the richest styles. According to our preliminary survey, there are now about 200 kinds of garment styles which distinguish themselves from each other. For example, a glimpse of this style will tell you that the entire branch of Miao people will wear clothes similar like that. Then, when you take a look at neighboring village, the clothing style will be totally different. Though they belong to Miao origin and can communicate with each other, their clothes styles can be a far cry from each other”, narrates Ying-Feng Huang.

Until now, the Miao people still bear the traces of tribal life. The Miao people still differentiate their clans by the patterns on their clothes. A piece of exquisite embroidery dress is an important medium for Miao people to know themselves. The style, size, and place of a pattern on a dress serve as an important symbol for the wearer’s social status. When you cotton on that, the totem of a clan is actually handled by these female embroiderers, then you will understand how much weight is conveyed by these seemingly tender needle and thread.