Know Who You Are? Guys wear traditional Chinese clothing for a day in USA

How do Asian-Americans feel when they wear the traditional clothes of their ancestors for the first time? Are they comfortable? embarrassed? excited? Do they feel the connection to their roots better? Here you are several short interviews that will answer all of the questions. It’s so sweet.

- I like, wouldn't mess with me if I saw me on the street 'cause it looks like I can kick some ass.
This style of jacket, referred to as the Tang suit (or Tangzhuang), evolved from the Manchu jacket of the Qing Dynasty (1644-1911) The Tang Suit typically consists of brightly-colored silk depictions of peonies, knotted cloth buttons, and a mandarin-style collar. When creating the garment, a flat-cutting method is used. The sleeves are cut with the bodice as one unit, making it baggy.

[Chris]
- I'm what people call an ABC, an American Born Chinese.
My mom is from Taiwan and my dad is from Hong Kong. 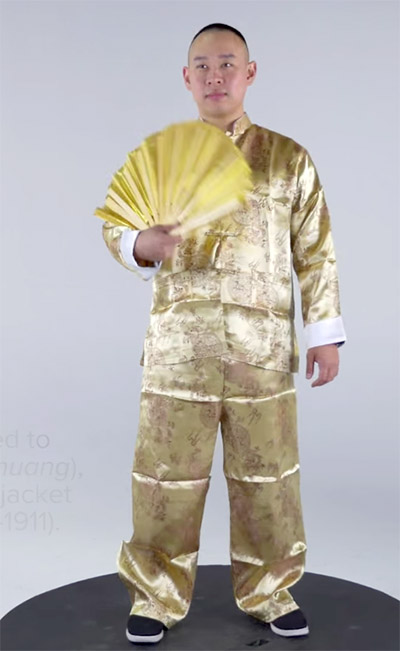 [Kane]
- My family's China and Vietnam. 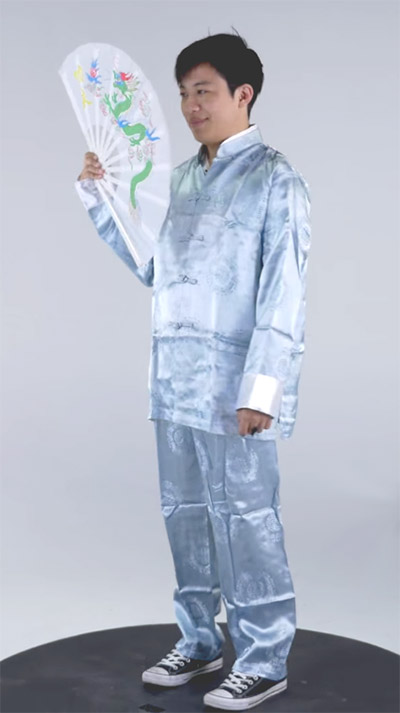 [Jay]
- My parents were from Hong Kong.
This is the first time I will be wearing
Chinese traditional clothing.

[Kane]
- I grew up seeing like Jet Li and Jackie Chan
wearing these clothes in movies.

[Chris]
- I don't like to admit it but I think there is
this pressure on Asian-Americans to blend in.

[Kane]
- I feel like I'm still trying to learn to accept myself in America.

(This style of jacket, referred to as the Tang suit (or Tangzhuang), evolved from the Manchu jacket) of the Qing Dynasty (1644-1911) pic

I feel like it's going to emphasize my Chineseness and Asianness even more.
I look like I'm from the past.
- Getting looks and getting questions is something that I'm not looking forward to.

This is something my grandpa would go to sleep in.
I'm expecting to have a lot of fun, to be honest.

If I do see people wearing this, it's definitely on some kind of holiday, like Chinese New Year.

I can't stop looking at people, this is crazy.
- My mom would be very happy to see me in these clothes right now.

I'm about to go out into the outside world and we're about to get some Dim Sum.

- You look so pretty!
- [Voiceover] Oh, cutie!
- So many people actually are complimenting me on this.
I don't know if they're just trying to be nice.
- It actually feels really nice though with the wind and the air and just walking down the street.
- And there's also someone staring from a car like they're like, but smiling.

- There was one guy, I noticed, who's taking a lot of pictures, right there, I don't know if you can see him.
It was crazy.
I'm about to pick up my girlfriend for lunch.
She was pretty surprised.
She thought it was a prank, I think.

- What's up?
- [Voiceover] Hello?
- I have to hold this up and then I also have get this sleeve when I wipe.
I don't get shit on my outfit.
- These are my coworkers.
Give me your first impressions.
- All of a sudden, you were behind me, so I was like, "Oh my gosh, what are you, a ninja?"

And I don't think it was because you were wearing the red but maybe that was part of why I made this absurd comment.

- And then we just called her out on it.
(laughs)
- [Voiceover] Do I look more Asian?
- You do, you look a lot more Asian but I think it's great.
(laughs)

- I'm super into it actually.
Like you're going to an event vibe, like fancy event.
- You might look like a man from the '60s going to bed.
- A nice Hugh Hefner.
- So, I just did yoga.
- I thought it was interesting because it started a dialogue about where you come from and your parents and,
- That's true.
- and your lineage and stuff.
So I thought it was interesting.
- I'm proud to be Asian but it's just exhausting having to wear my identity on my sleeve like this.
- When I first put on the outfit and I was driving,
I felt like a lot of people were staring at me.
I just felt self conscious.
- In a way it made me face and address my Asian-ness head on, like in a very physical way.

- I think people's positive reactions really validated me wearing the outfit and it helped my confidence.

- Someone asked me, "Oh, does everyone in China "wear stuff like this?"
It made me realize that not everybody understands like, how Asia works.
- The other Asian people that saw me really lit up and was like
"Hey, there's an Asian person representing."
- It's really important to think about your place as an Asian-American.
- By the end of it, I felt kind of cool and I felt proud to be wearing it.
- It was a really fun experience. I think I would definitely do it again.
- Just wear whatever you want as long as you're like holding yourself and being confident in it, it's all good.
- Remember when your mom dressed you and just said you looked like a China boss.
- [Voiceover] Yeah, I just sent her a photo, she's going to love it.