Traditional Japanese obi. The belt itself and various knots

The Japanese folk costume, so-called kimono, can’t be properly worn without the obi – wide and long ornate sash. Both males and females use obi but they look different. Japanese women are very creative and imaginative if to talk about the kimono and obi belt wearing. There are about 100 various ways of tying the obi, each more elaborate and intricate than the other. Today, we’ll show you some of the obi knots. And also, we’ll find out what other accessories are used with the obi to keep the kimono in place.

A typical obi is about 30 cm wide and 420 cm long. Traditionally woven from silk and decorated with bright patterns, these sashes enhance the beauty of kimonos. 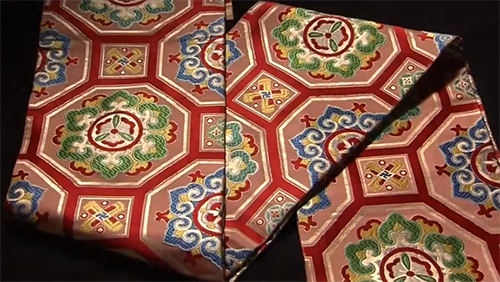 Here is an obi with a colorful and vibrant pattern. Look closely and you can see that it has a raised embroidery.

There is a factory in Kyoto that specializes in making obi. When they’re weaving an obi, they use 4800 threads on the wall. Weft threads of many colors are woven through the warp threads. By giving the weft threads a bit of slack, the weaver can create raised patterns. The ability to leave just the right amount of slack is one mark of a talented weaver. 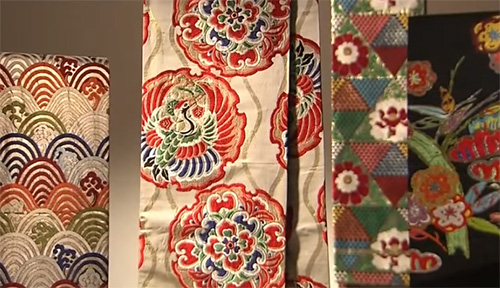 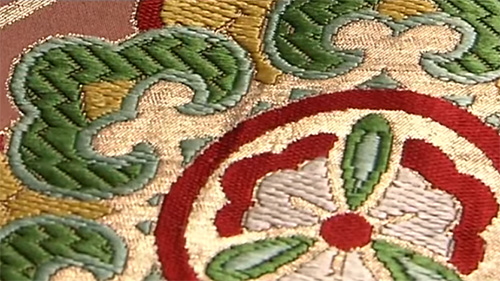 Here is an obi with an ancient court theme. Each tiny figure is depicted in rich detail. The man in blue seems to be looking up and laughing. But when you look closer, you see he has no eyes, nose, or mouth. With just tiny loops of thread, the weaver has conjured a lively expression. 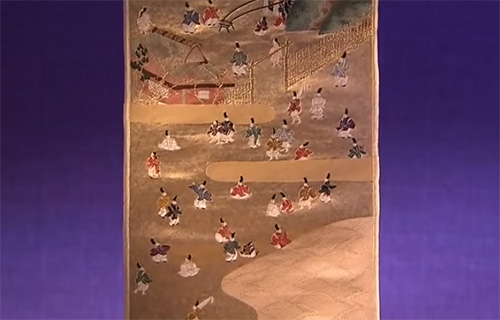 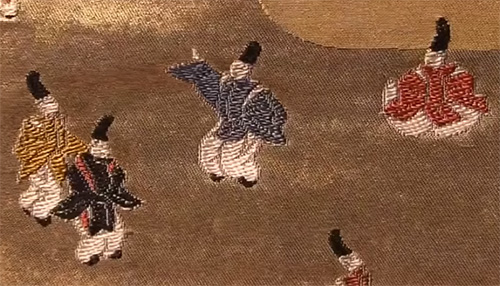 An obi takes on different looks, depending on how it's tied, and there is said to be more than 100 ways to tie an obi. Obi knots came into vogue during samurai times. Let's look at a few most widespread obi knots. 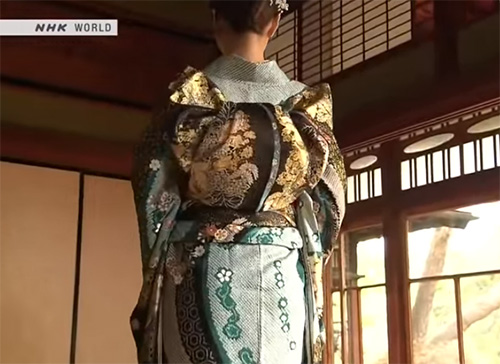 This butterfly-like knot with loops drooping down on either side is often worn with Bridal kimonos. It was popular in the samurai class and does not come undone easily. 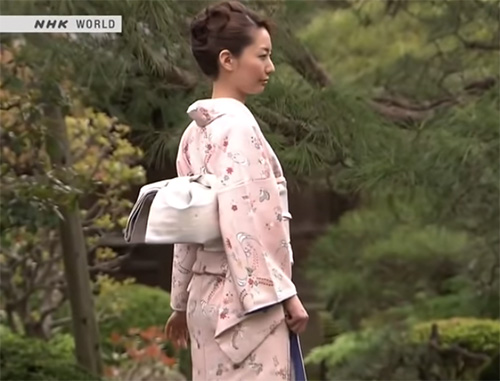 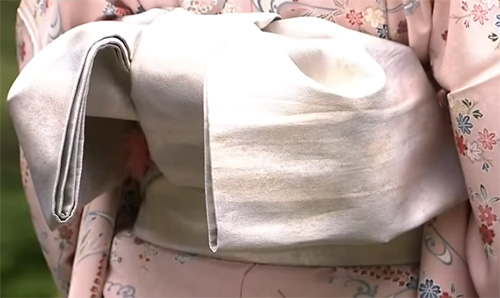 This next knot, tied diagonally, is bold and dynamic. It's used mainly with broad-sleeved kimonos and is popular among girls and young women.

The spectacular knot here is worn when meeting a prospective marriage partner, as well as at wedding banquets and other happy occasions. This knot is meant to look like a sparrow puffed up against the cold. 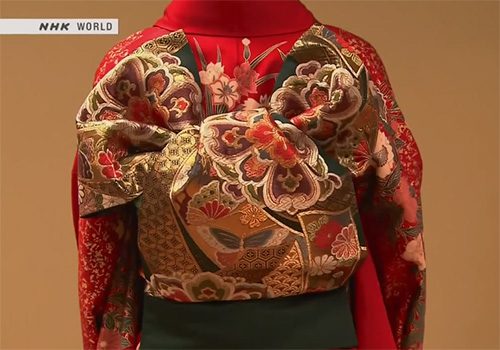 The most common way of tying an obi among women of all ages is this. 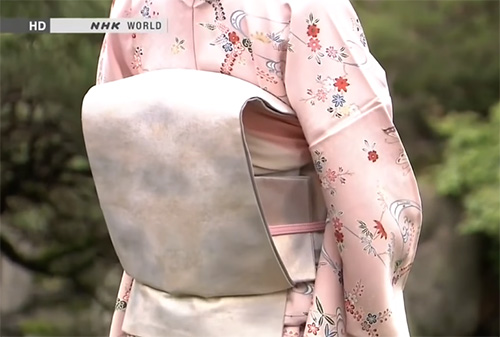 It's based on this knot that's easy to tie. The sash hangs down the legs. This knot was widely used by the common people in samurai days. And later, it was modified to highlight the wearer's femininity. 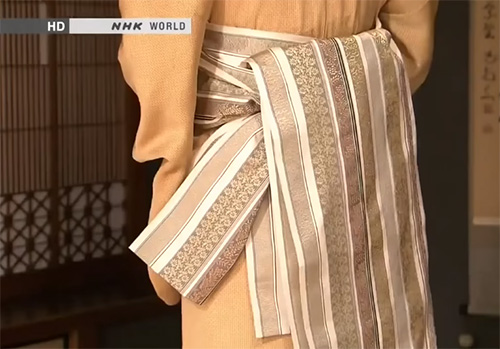 This is the modified version, which was originally worn by geisha. It features a special pillow beneath the obi and the effect is considered quite sensual. The dangling portion of the obi can also be tucked up to create the simple, yet refined knot, which is still commonly used. 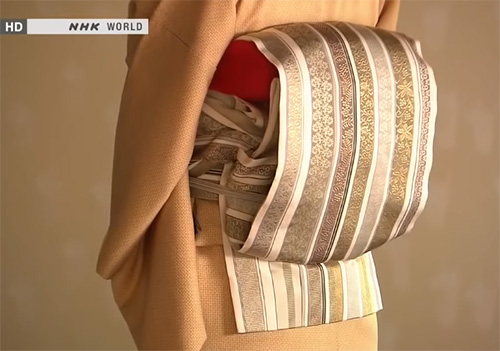 Young geisha use one of the most stunning obi styles. It requires a sash more than 2 meters longer than an ordinary one. The sections overlap, the angle of the overlap is designed to give a strong sense of femininity. 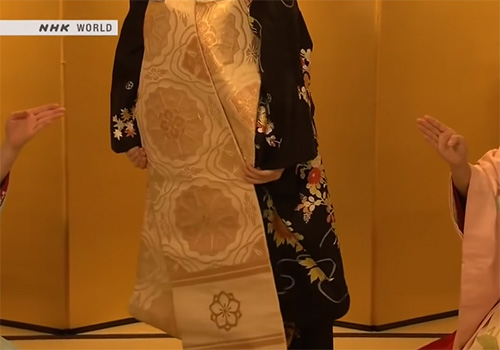 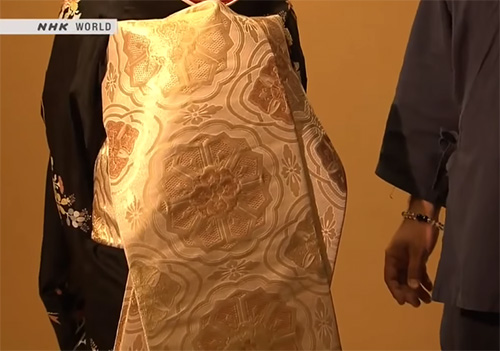 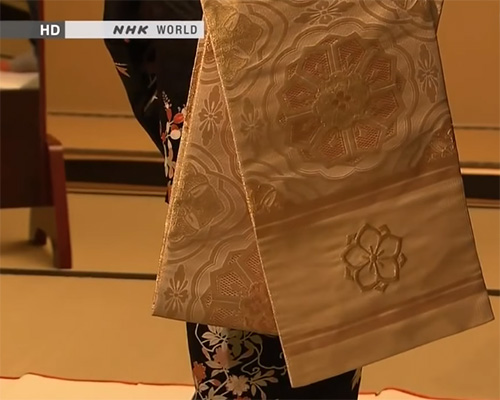 There’s another really pretty obi knot. It looks beautiful and extremely elaborate. And it is called the “treasure knot”. Because the top part of the knot reminds a drawstring bag and the knot looks like a bag itself, containing treasures. 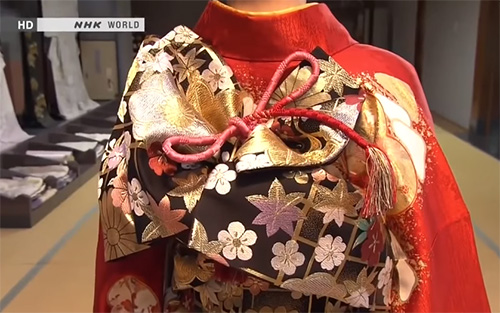 A beautiful obi, tied in an alluring way, serves to accentuate the sophistication of a kimono. It complements the kimono perfectly and is considered the most important kimono accessory ever.

Except for the obi, there are other accessories that go with the kimono. They help to keep the kimono in place and to shape the garment properly. Let’s see what they all are. 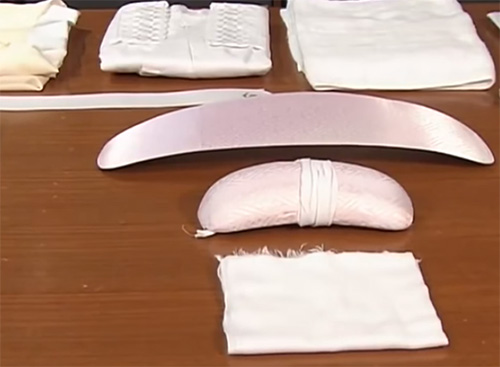 First, these are called “koshihimo” – it is like a usual belt to keep the kimono in place. Because there are no buttons and no zips or anything with kimono. 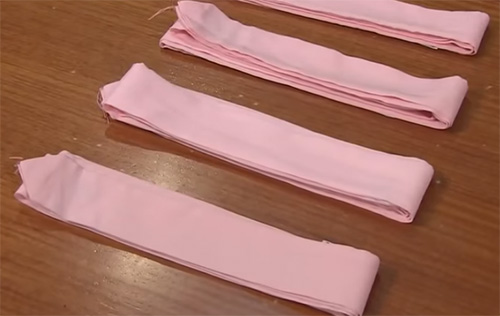 There are kind of towels. They are used as padding because no one has a straight cylindrical body, which is the ideal form for wearing a kimono. 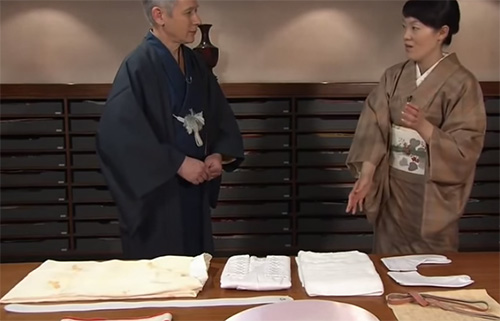 And then, finally, there is obi-ita – a thin stiff board. It keeps the front of the obi nice and smooth. The Japanese actually put it in the obi. 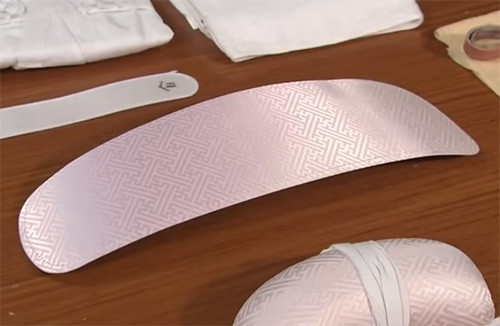 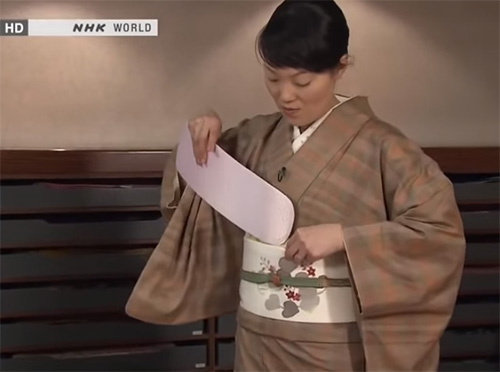