The Garo traditional attire looks catchy and beautiful. These people – men and women alike – adorn themselves with a lot of brass and beaded jewelry and wear bunches of feathers on their heads. The Garo ethnic group is unique because they look more like Tibetans but live in India and Bangladesh for centuries. So, is the Garo folk dress closer to Tibetan or Indian? What pieces of clothing do they use? And how attached are they to the national apparel? Time to find out.

The Garo people (also known as A'chik or Mande) – the indigenous Tibeto-Burman ethnic group. These people originate from Tibet, but migrated to India at some point, so a lot of the Garos live in India today. Their total population is over 1 million people. And they are among the few matrilineal societies left in the world.

This ethnic group is very old in origin. It is said that their ancestors immigrated from Tibet to India around 400 B.C. But living in India for so long, these people kept their unique culture, clothing traditions, customs and beliefs, etc. 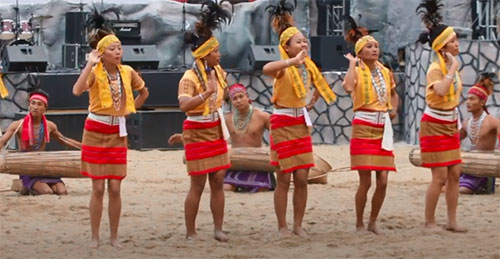 In the modern world, the Garos dress in ordinary Western-style clothes in everyday life. But they have their own traditional garments worn on special occasions, ceremonies, and celebrations.

The traditional women’s wrap-around skirt is called “dakmanda”. This is the main female garb. It’s very Asian-looking in style. The rectangular piece of ornate hand-woven cloth is wound around the lower body of a woman. It can be knee-length, ankle-length, etc. The dakmanda is usually embellished with wide horizontal stripes and other patterns.

There is also a simpler version of a wrap-around skirt called “gana”. It can be shorter, usually is less decorative, and comfier to wear. It’s worn at home for various chores.

Also, women add a matching headband to their traditional attire called “kotip”. It is made from cotton fabric and adorned with beading.

The traditional belt is called “gando”. It is 6-7 feet long and 6 inches wide.

The local males use a kotip headband as well. It is made from dark blue or white cotton and decorated with beadwork.

Another item of the male traditional outfit is a “pandra” – a piece of cloth that crisscrosses the chest of the wearer. This accessory is ceremonial.

The Garo people use a lot of traditional jewelry. Both men and women wear jewels, especially necklaces and brass jewelry. 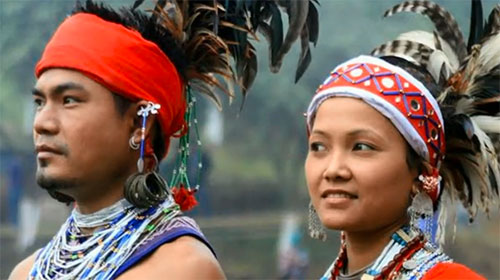 Then, there is a beautiful women’s beaded belt called “seng’ki”.

Also, women wear a bunch of feathers on their heads as ornamentation called “pilne”