National attire of Dagestan. What did these proud Caucasian people wear?

Dagestan is one of those regions in the Caucasus that are so rich in clothing traditions. The folk outfits here were bright, multilayered, and densely embellished. The clothing customs in this area can easily surprise you. For example, have you heard about false sleeves being used as pockets or actual tiny pockets inside the coifs? What about trousers sewn from several different types of fabric – visible and invisible part – to prolong the life of this garment and save the family budget?

The national costume in Dagestan remained the same for many decades. The fabrics and decorations changed a little but the silhouette and main features were constant.

For a long time, clothing pieces in Dagestan were made from hand-spun fabrics – wool, cotton, etc. Women used only locally available fabrics. But later, different imported materials came into the picture. For instance, ornate Oriental fabrics.

Traditionally, the local female outfits were multilayered. Of course, if we talk about the festive costumes. In day-to-day life, women wore simpler garments, with fewer decorations and jewels and fewer layers.

When they worked in the field or did various other chores, females took the hem of their dresses or long tunics and tucked the sides into the trousers or wide belts so that the dress was shorter and allowed the freedom of movement. But the Dagestan’s culture is strict and all about the proper behavior, so the women’s body was still covered thoroughly.

The local women had a trick to save the family budget – their trousers consisted of several parts made from different fabrics. The lower, visible part could be sewn from silk or velvet, while the upper part, hidden under the tunic or dress, was made from cheap home-made cloth. When the cheaper fabric got worn out, they just removed it and replaced by a new piece. So, the trousers always looked festive and were in use for much longer. 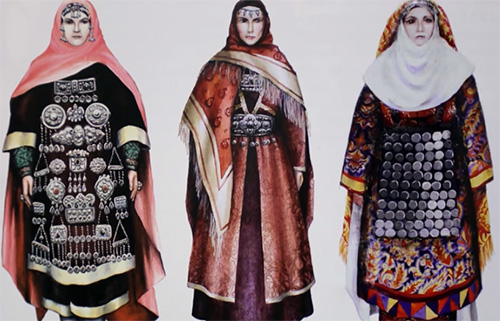 This is the traditional wedding attire of a Dagestani bride. You can see that there are many layers of clothing, especially on her head. And everything is richly embellished – she has a lot of silver jewelry, they reach the woman’s knees. Her coif-like headdress is adorned with silver coins and other decorations, including a pattern on the forehead; it resembles a human palm and is made from pearls sewn to the fabric. All her embellishments were symbolical and served as protection from evil. 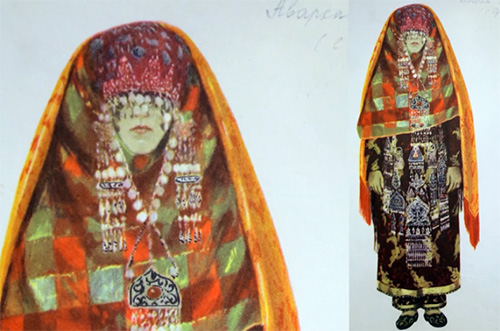 This attire is for an elder woman. The colors are darker, there are fewer adornments. If she was younger and unmarried, her dress would be more colorful and would have a decorated hem – with embroidery, applique, ribbon trims, and other adornments. Also, this woman is wearing a fabric belt called “kushak”. Such belts were very popular among different ethnic groups in Dagestan (by the way, you could often differentiate the ethnic origin of a person by the belt’s color), they were usually 3 m long. 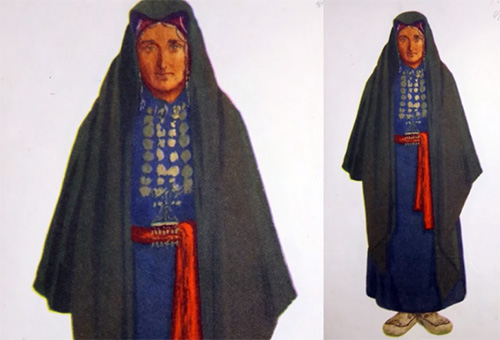 This is also the costume of an older woman. She is wearing a very unusual and interesting headwear that covers almost her whole body. Under it, she has a “horned” headdress called “chukhtu” made from quilted wool, the rare part of it covers the women’s braids. This chukhtu headgear was never worn alone, it was always covered with a sheet of cloth – plain white cloth for older women and a bright kerchief for younger girls. These large covers were used because, in many regions of Dagestan, women traditionally hid their neck, chin, and shoulders when they left their home. 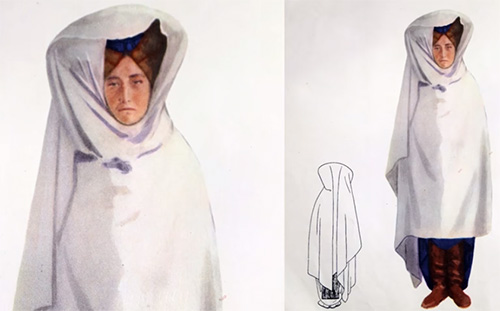 Shoes played a very important role in Dagestani folk costume. Footwear was among those parts of an outfit that distinguished ethnic groups from one another. 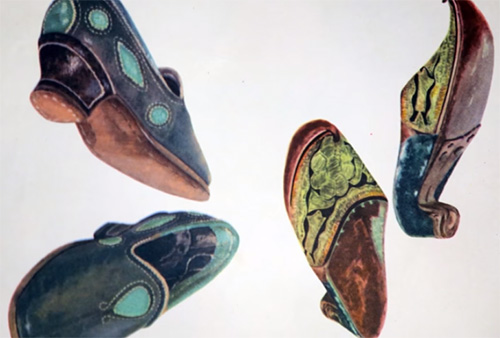 For instance, in western Dagestan, women wore colorful hand-knitted shoes with a multilayered quilted sole. Men in this area used similar shoes but they were less colorful and a bit shorter. Such shoes look pretty fragile and short-lived but, in reality, they were durable because people could add a leather sole or a felted quilted sole. And, of course, these are festive pieces, which were worn only for a special occasion. Such footwear was a perfect choice for the region – they were warm, flexible, and fit the foot ideally. 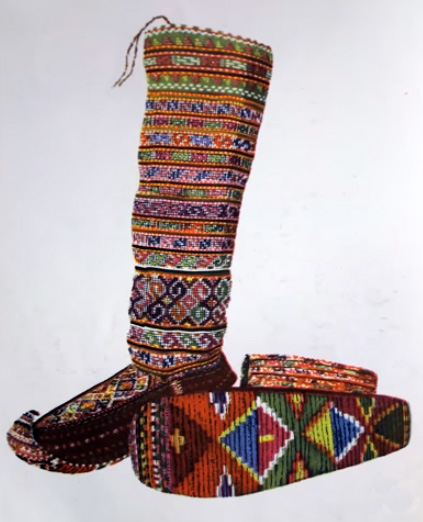 This is the everyday footwear of Dagestan. These shoes are made from leather and have a cord to tie them to the foot. They are rather durable. 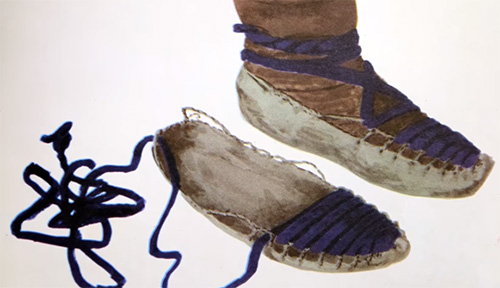 Female winter clothing mostly consisted of a short fur coat. There were different designs and styles of fur coats. Some of them had false sleeves – they weren’t used for the intended purpose but served as pockets to carry small items.

By the way, in the past, Dagestani costumes didn’t have pockets sewn to them, so they used other tricks – attached items to the belt, put them into false sleeves, made sort of little pocket places inside their headdresses, etc. Sometimes, women made pretty aprons that had one large pocket on them, but these weren’t aprons used to protect the attire from stains but rather another adornment to the outfit. 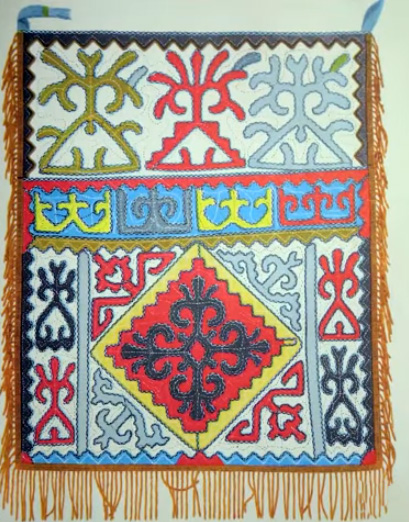 Decorative apron with one large pocket

The local men wore less distinctive costumes. Their garments were rather typical for the Caucasian region, with only some details that varied and showed the ethnic differences. But the ever-present in Caucasus chokha coats were used in Dagestan as well. Chokha is a woolen coat with a row of bullet spaces at the breast part. These bullet spaces today are mostly decorative, but in the past, they were used as intended.

Male winter garments in Dagestan were diverse because men had to do a lot of chores outdoors and the climate in this part of the world is really harsh. Mostly, they were fur coats – short or long, tight-fitting or with large pelerines and wide skirts, of ordinary design or with false sleeves, etc.

If to talk about headdresses for men, they used fur hats, karakul hats, or sheepskin hats called “papakha”. The shapes and sizes of these hats were various. Papakha was a festive headgear, while males also had smaller day-to-day fur hats. Karakul papakha hats were expensive, so only wealthy men could afford them. The sheepskin papakha hats were very popular because the Caucasian region is famous for stockbreeding, particularly people had lots of sheep, so the material was available.

You might have noticed that Dagestani people often wore very bright and colorful clothing, accessories, and footwear. It can be easily explained – local men and, especially, women wanted something cheerful in their life because the climate and nature in this region are rather stern and severe. So they used bright clothes to add some color.