Tajikistan is one of the Central Asian countries with a rich culture and centuries-old traditions, including the clothing traditions and folk crafts. The outfits worn by local men and women in the past were flamboyant, multilayered, and beautifully adorned. It’s a pity, these costumes are so rarely used in daily life now – only such simpler pieces like a skull-cap or kerchief are still worn by a lot of Tajiks. Also, the local women sometimes wear modified folk dresses – they are made from the same fabric with the same patterns on it, though the design may be pretty contemporary. But let’s learn more about the authentic Tajik clothing.

The folk dress differs a bit in each region of Tajikistan. But, in general, the traditional Tajik costume is rather modest, multilayered, and ornate. Let’s take a closer look at the male and female folk outfit of Tajikistan.

Tajik men often wore several robes – one inner robe to wear at home and another one to put on top when he went somewhere outside, into the street. 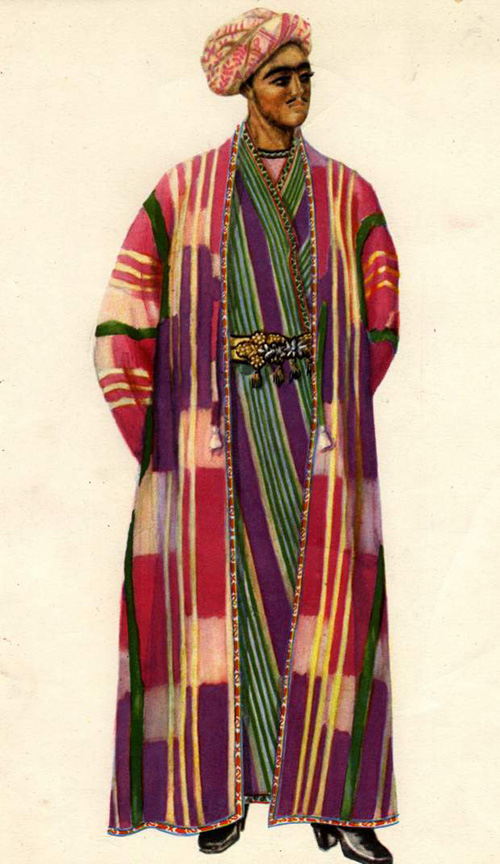 Also, the robes were loose, sometimes very loose. A lot of fabric was used to make them, so one of the reasons was to show wealth by the amount of fabric.

Men belted their outfit when they went to public places. But here’s an interesting fact: in some regions, if the inner robe is belted and the outer is put on top, it’s day-to-day clothes; if the outer robe is belted, he’s in mourning.

The male headwear could consist only of a skull-cap called “tubeteika” or another item called “chalma” could be added on top. Chalma is a long piece of cloth wound around the head in a specific manner, like a turban. And chalma was always put onto the tubeteika – it helped to hold the chalma in place and gave a shape.

Different shapes and designs of tubeteika from various regions of Tajikistan

Tajik men wore their shoes in a rather weird manner. They wore soft leather boots and then shoes or sort of flip flops with a hard sole on top.

The folk costume in Tajikistan was usually multilayered, so women could wear several dresses on top of each other. There could be up to 7 dresses – for formal occasions. You could tell the number by the cuffs that peeked. These people really liked their clothes multilayered. And also, it was a way to show your wealth and high status.

The dresses were made from silk, velvet, cotton, and other local fabrics. Some of them were cut like a dress, others like a robe, open in the front. Of course, there was a basic garment or several underneath. This basic dress was white and closed, it covered even the neck with a stand-up collar – almost no skin was displayed by Central Asian females. 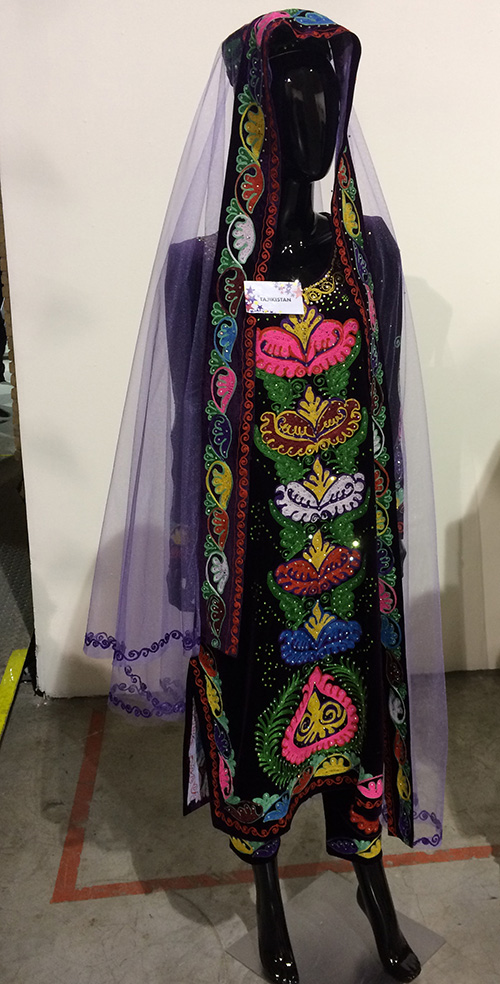 Over the dress, women wore a robe made from thicker fabric. It could have long or short sleeves. And it was outerwear, something like the modern cloak. The robes were made from velvet, brocade, and other expensive fabrics.

In the early 20th century, Tajik females often wore a burqa – special robe that covers the head and partially body of a woman, including the face. This is a Muslim garment and it isn’t worn by the local women anymore, at least en masse. By the way, burqa is banned in many European countries these days. Today, Tajik women use just tubeteika caps, which can be paired with a kerchief during a festive occasion or as formal wear. 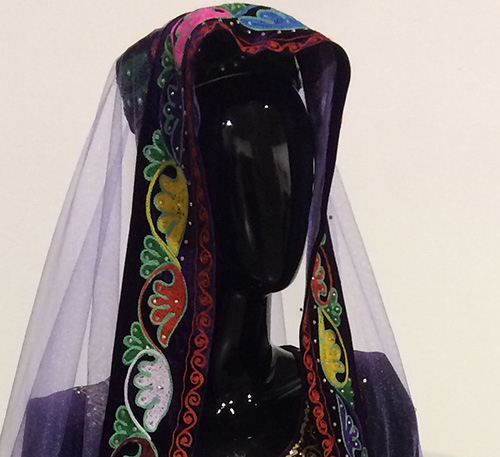 Fun fact: Tajik women used to wear a kerchief holding the ends with their teeth so that the hands remained free.

Married females had a specific design of the tubeteika – it had a flap of fabric at the back that covered her braided hair. This flap was adorned with embroidery as well as the part around the head. And this flap was wrapped around the braids to hide them in a way.

Tajik females adorn their national attire with massive silver jewelry. These are necklaces, chandelier earrings, headpieces, bracelets, etc. They are made from silver and gems. And they really look fancy. Of course, these jewels are never out of fashion and the local women use them today as well.

Even now, in the 21st century, Tajik people wear traditional garments for special occasions. For example, they still use their folk skull-caps called “tubeteika” paired with a kerchief. This piece is one of the symbols of Central Asia, so it’s proudly worn by Tajiks, Tatars, Kazakhs, Kyrgyz, and other local nations.

The folk dress of Tajikistan is bright, ornate, and represents the unique culture of Central Asia. It is very similar to Uzbek traditional costume, as these countries are neighboring. And Tajik national outfit demands great skill and attention to detail to make it.