This is the last article from the series dedicated to the traditional Cherokee clothing. This time, we will talk about Cherokee folk dress from the mid-19th century to this day. Unfortunately, this is the time when a lot of Native American tribes were brought to the brink of extinction and a lot of ancient traditions barely survived during the Americanization and Europeanization of the New World. But step by step, the descendants of proud Cherokees got their clothing traditions back and learned all they could about their heritage.

After the removal of Cherokee people to reservations, they really began to assimilate in dressing style.

Here is a photo of William Penn Adair, post Civil War. And he's dressed in store-bought shoes and store-bought clothes. The gentleman on the right still has a hunting jacket on; it is cut on the bias, you can see the stripes and the fringe. 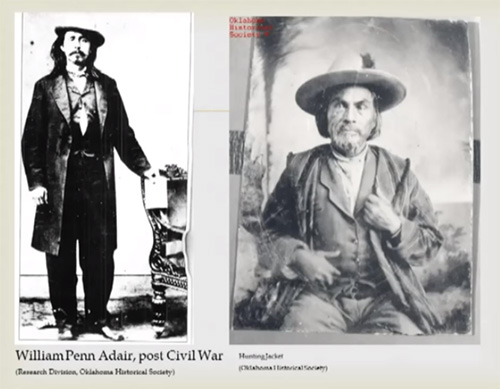 In 1845, a society was organized and offered premiums for the best specimens of homespun cloth, coverlet, beaded belt, cradle coverlet, and socks. This is the beginning of the Cherokee county fair. This is where the local people began to exhibit their handiwork and begin to compete for prizes.

Indian agent George Butler wrote on September 13, 1853: “Some of the Cherokee women are accomplished needlewomen. Their taste and skill in embroidery may be seen at the Crystal Palace in New York, where has been sent for exhibition a full Indian suit of dress buckskin beautifully embroidered with silk. This beautiful piece of work was designed and executed by the ladies in the family of Mr. J.M. Payne”.

Here is an exquisite buckskin coat embroidered by Polly Webber and Nancy Riley. And J.M. Payne was the principal of the school they were studying in. This piece is in Milwaukee Public Museum right now. 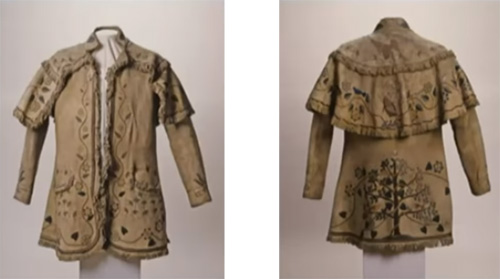 Here is the second coat. This was made for William Gallaher of the Indian Brigade in 1865 by Nancy Riley and Polly Webber. He went home to Minnesota and took the coat home with him. That's why a Cherokee coat is in the Minnesota Historical Society. These double cape and small fringe are very indicative of Cherokee style. 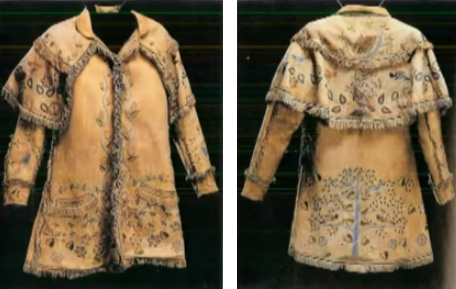 This is another buckskin coat. Unfortunately, its origin is unknown, but the design is typical for Cherokees. 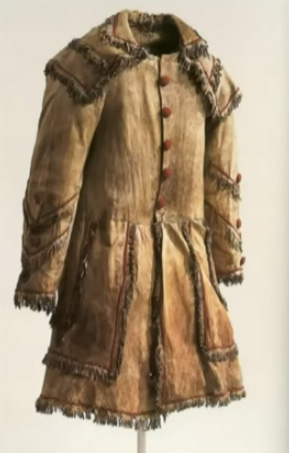 Cherokee clothing during and after Civil War

This is a picture from the Civil War period taken from one of the books of Osprey’s “Men-at-Arms” series. They take actual garments and then make color plates and these wonderful pictures. So you can see a Sequoyah jacket and another embroidered jacket and some beadwork done on a vest.

And another picture from the same book. 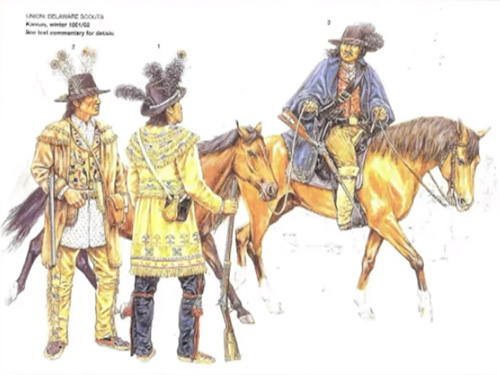 In 1915, some of the Cherokee men were still wearing leather moccasins and leggings.

The Oklahoma Historical Society has the actual coat that Charles Banks Wilson used as the model for Sequoyah. The black fabric is velvet, so it is a very fine, beautifully made jacket. And the stripes are very easy to weave. Also, you can see the infamous red fringe. The coat is made from half wool and half linen, which makes it very durable. 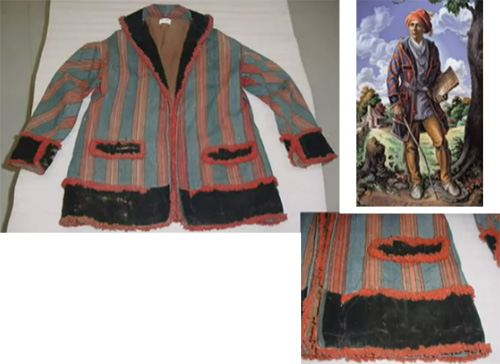 In 1838, the BIA sent William A. Ames to Sequoyah Training School to teach loom weaving. Other adult vocation classes were offered. The students from these two courses made up the Sequoyah Indian Weavers Association.

By 1947, there were 125 weavers in three Cherokee communities. In June of ‘47 this group participated in the International Textile Exposition in New York City.

The funding ended in 1954 and operations began a gradual decline.

A few of those weavers that were born from and bred the weaving knowledge from this particular event are still honored by the Cherokee people and are a part of this ethnic group’s legacy.

By the 20th century, Cherokees had assimilated their clothing styles to match the larger American society. But some clothes continued to reflect ceremonial life.

Chief WW Keeler (William Wayne) here is posing in a hunting jacket. He was Cherokee chief in 1949-1975. He was the first Cherokee chief elected by popular vote in the modern era – by Cherokee Executive Committee in 1949. 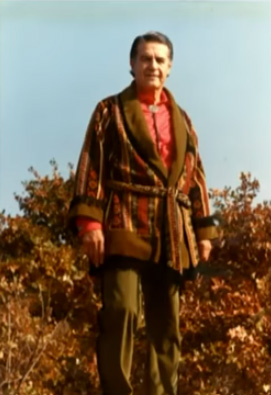 It is a philosophy and movement promoting unity among different American Indian groups regardless of tribal or local affiliation.

Many tribal people shared clothing and regalia during the 1950s and 1960s.

Pow-wow dancing became popular and people dressed by the styles they liked – not by their tribal affiliation.

In this photo, WW Keeler wears a headdress that is not typical for Cherokee people. Though, it could have been a gift. But, generally, the mid-20th century was a time when anything Indian was good for all Indians. At the time, it might have been the only mean to keep the Native American traditions alive. 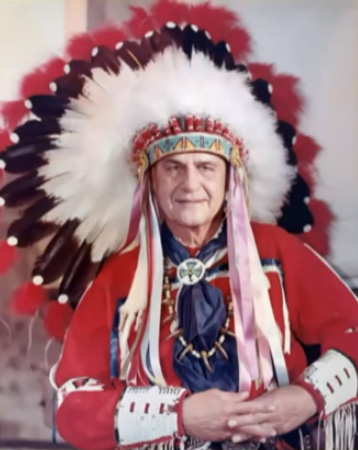 Today, the Native American Indians are much more sensitive to what is tribally and specifically theirs. And there are a lot of people that are trying to save and incorporate the traditions correctly, so they don’t really like, for instance, seeing white people in war bonnets, etc. Because they know the deep meaning behind each garment and each accessory used by their ancestors.

The tear dress is a utilitarian dress. It was opened down the front for nursing mothers. If you were wealthy, you had someone dress you, so your buttons were in the back. There was a set in gusset under the sleeve. The sleeves were three-quarter-length. All pieces in a tear dress were rectangle or square.

This is a tear dress and it really is made of all rectangles and squares. And it's a very practical dress. 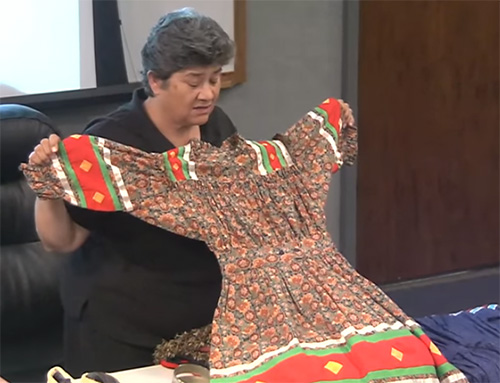 Here are a couple of pictures of full-length tear dresses. 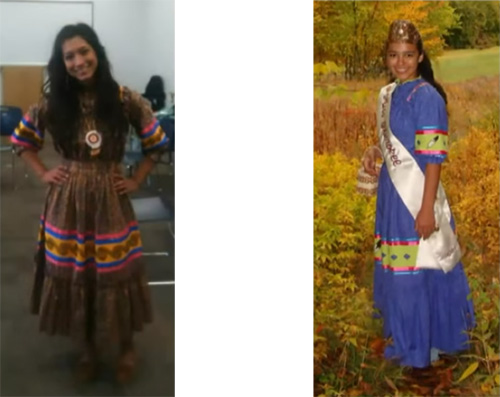 The ribbon shirt is not Cherokee in origin but it is utilized and acceptable as Cherokee men's attire. It's often used for special occasions and ceremonies. 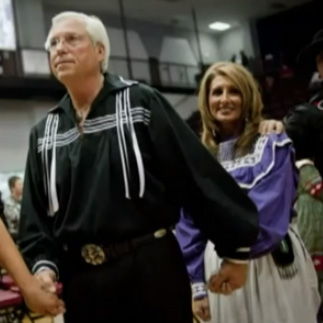 Today, the Cherokees have a variety of dress. They recreate the past and come up to the modern, they like to reflect their culture through their clothing. As you can see, there's a variety of ways to dress that are acceptable to the Cherokee people today.