If you want to find out how the craft of weaving looked like in ancient Mexico, you should visit Teotitlán del Valle, a small Mexican village near the Oaxaca. People here continue the work of their ancestors – they practice the Zapotec weaving, using only traditional techniques, tools, dyes, and patterns. You can observe the whole process of making Zapotec woven folk clothing and traditional rugs in this community. We hope that the article below will stir your interest toward this ancient culture.

Everyone knows about the ancient people who used to live in North America, mainly the Maya and the Aztec, but few people know about the Zapotec. The Zapotec, known as the “cloud people” that inhabited the Valley of Oaxaca, not only built great ancient cities such as Monte Alban and Mitla but also left rich cultures such as their one-of-a-kind weaving traditions. Oaxaca as the center of the Zapotec Empire dominated the language and trading. About 400,000 Zapotecs are scattered around Mexico nowadays, and most of them are trying to preserve their culture. 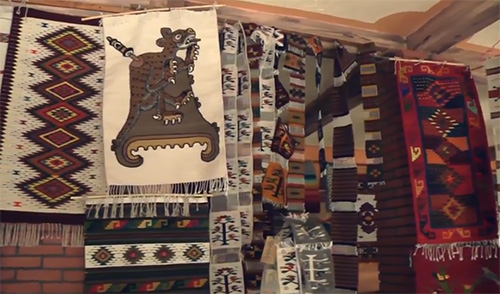 In the Golden Age of the Zapotec Empire, the people of Teotitlán del Valle were already well-known for their weaving. All the clothes and rugs were traded widely not only throughout the empire but also beyond. Although the Zapotec Empire saw its decline, the clothes from the weavers in Teotitlán continued to be in demand. In 1521, the Spanish arrived and changed the face of Zapotec weaving forever as they brought in sheep and new looms. Weaving materials have been replaced from cotton and cactus fiber into wool, and the greater strength required to operate the new loom led to men taking over traditional female weaving roles. However, these changes made these new clothes and rugs more durable and bigger than we see today, but some weavers in Teotitlán are trying to preserve the traditional weaving techniques that their ancestors used to do. 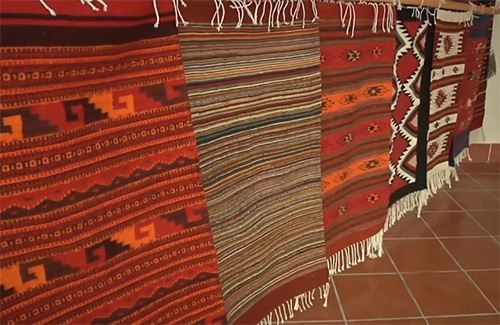 “My father talked about his father. I’m third generation in my family to make these rugs. He couldn’t read, but my father was one of the best teachers when it came to weaving. They started working with the looms. And I learned from my father”, says Raul Chavez Zitlaly, one of the hereditary weavers of Teotitlán.

The process is time-consuming and laborious as everything is done by hand. These techniques these weavers use have been handed down for generations.

“The women are the ones that primarily comb the wool and thread. This process doesn’t require a lot of physical strength, it’s pretty easy. The wool continues getting smoother. We’re going to make the fiber that is used in the spinning wheel to make the thread. All the women learn how to do this when they are 6 years old”, one of the women explains the female role in the Zapotec weaving. 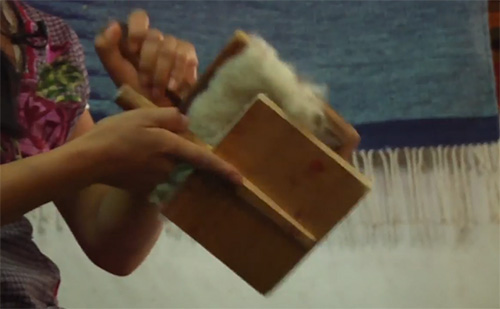 The first process is to prepare the yarn by using two flat brushes with short wire bristles to remove the debris in the raw wool to prepare the wool for spinning. Then, the wool is taken to a spinning wheel where the wool will be pulled into yarn from the wool sheets – done by the brushes. 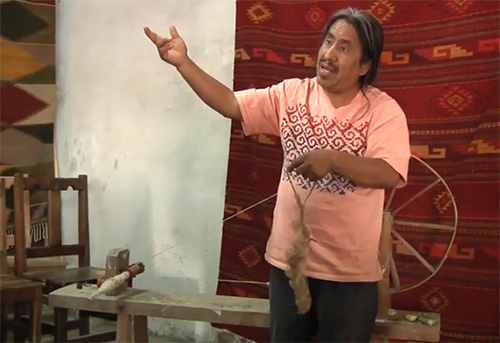 Raul Chavez Zitlaly, one of the hereditary weavers of Teotitlán, is spinning yarn

After the yarn is ready, it is time to dye them. Dyeing the yarn is more like playing with colors instead of lots of physical work. All of the dyes from Raul's workshop are authentic dyes that come from roots, leaves, fruits, and other organic materials.

“Right now, we’re trying to save the natural dyes. We work with leaves, peels, all the natural colors, and the cochineal, the insect that lives on cacti”, adds Raul Chavez Zitlaly. 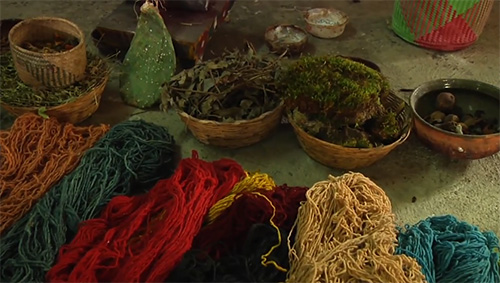 Only natural dyes are used in Zapotec weaving

After the yarn is dyed, comes the final process – weaving. It is where the weavers work their magic to create different patterns. Each family uses different techniques in weaving but the process of how to work on a loom never changes much. It is always time-consuming and requires a lot of experience.

“We really don’t want to change anything because the whole process is part of the tradition. If we make a more modern machine that does the work faster, we wouldn’t be making a traditional piece, it would be something more industrialized. And we like to continue this original tradition because that’s the main goal of this place, that all of us do everything traditionally because that’s what visitors like to see, how the work is really done and what the real process is. So I’ve never thought about changing the technique. More than anything, it’s a tradition and a form of work because about 80% of the town lives off of this. The town isn’t very big here, it’s small so the majority of us are weavers. It’s a source of work for us. It’s part of our daily routine”, continues the craftswoman. 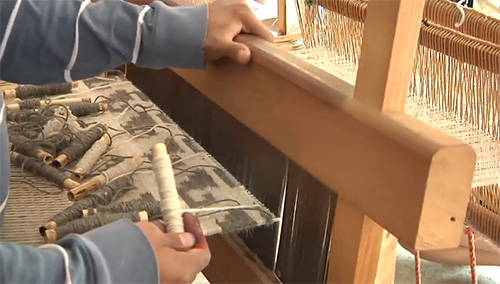 The process of weaving a rug on a traditional wooden loom

“Every day, we’re working on the looms, combining wool, painting, and weaving. That’s the work that keeps us busy all day”, adds Raul Chavez Zitlaly.
The people working to preserve these practices have begun to spread out to the cities of Oaxaca. They support the Zapotec weavers by opening shops that help promote and sell traditional rugs.

“My name is Jose Buenaventura Gonzalez. Yes, I was born in this town. Teotitlán del Valle. I started my own business in 1987. But, before that, I did work with a lot of family because I needed to work very young. My father did teach me about weaving, a little bit. But I practiced more with each family because each family has a different technique of what to do. Here, we are about four, yeah, four people, with my kids. Most of them now do it more like a vacation. So, it's not constantly, they won’t be weaving here. It’s mostly when I’m here. They come back at night or on weekends. But, when they are on vacation, they come and weave. I have three brothers and three sisters but they live in different houses. And they weave too. Each of us opened our own store and found how to sell our rugs. So it's changing, you know? Mostly, who does the carting and spinning more now is women. They do, like, half a kilo a day. You know, like, four hours carting. Close to six to eight hours. They do mostly a kilo when they work very hard to do a kilo of wool. So, if I want to do the whole process, this is like a kilo and a half”, tells us one of the shop owners, who sells Zapotec traditional rugs. 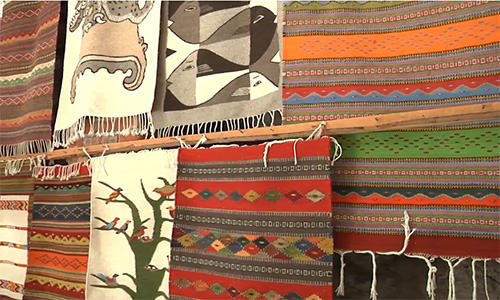 In his workshop, Jose explained that he once had a very good, stable job that he gave up to presume weaving full-time. He enjoys being able to work on his rugs his own way and at his own pace. He said that he cared so much about preserving the traditional weaving practices that he didn't mind taking a downgrade in his lifestyle.

Weaving is a part of these people who live in Teotitlán del Valle. It is a gift from their ancestors and they are trying everything to preserve it.