Brazilian women of African origin traditionally wore a distinctive garment that showed their status and heritage. It was a shawl-like piece called “pano da costa”. We can find it in many illustrations and old photos. Most often, such a garment was used by Afro-Brazilian matrons, older women. In the photos, they’re sitting with pride and dignity in their posture, wrapped in a decorative shawl and with an intricately draped traditional head tie. Let’s find out more about the pano da costa. What did it look like? What for did women use it? What embellishments did it have?

Pano da costa literally means “Cloth from the Coast”. This is a decorative shawl. It is one of the traditional pieces of clothes in Bahia state of Brazil (Eastern part of the country). This item was extremely popular in the 19th century among Afro-Brazilian women. The garment and its name probably both originate from Africa. Women wrapped themselves in pano da costa, wearing it around the shoulders or around the body or throwing it over one shoulder – there were many different ways of draping this item.

This shawl was rectangular, sometimes it was folded once to create a triangular shape. Also, a woman could easily rearrange the cloth if need be and drape it differently. For example, when she was simply walking along the street, the draping could be looser, while during the chores, women tied their shawls in a more practical manner so that clothes were out of the way. Often, females wore a matching shawl and head tie, made from the same fabric and decorated in the same way. 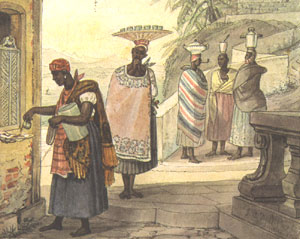 Group of “baianas” selling their goods in the 19th-century Rio de Janeiro. Illustration by Jean Baptiste Debret from a book “Castro Maya: collector of DeBret”, 1826. Photo from Wikipedia.org

The material of pano da costa could be different as well. Muslin, cotton, lace, etc. Traditionally, this garment was rather ornate, adorned with lace, embroidery, prints, crocheted patterns, or other decorative elements. It should be not only useful and practical but beautiful and catchy as well.

Aside from the entirely practical function, pano da costa shawl was a statement item. It showed off the social status of the wearer and her African origin. Men didn’t wear pano da costa, only women used it.

Even today, some Bahian women wear a pano da costa with their opulent traditional outfits. And it looks so natural and cute. 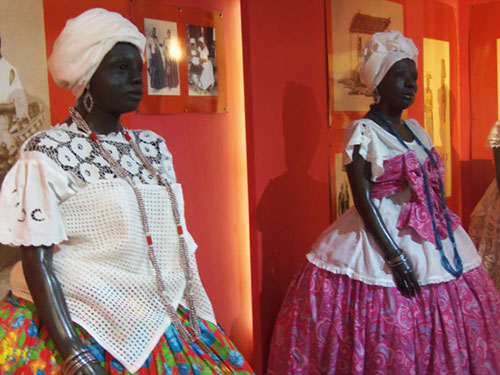