Egyptian craftswomen from Naqada district are masters in hand weaving the scarves. This craft is ancient and it has been feeding the locals since hundreds of years ago untill today. Though, in modern days, fewer and fewer people are ready to work so hard to earn a living. The traditional handwoven textile of Naqada is exciting to watch but it is a hard labor – each step of the process is handmade: from inventing the future design and color palette to spinning the yarn to preparing the threads for the loom to weaving to finishing the scarf, etc.

The Naqada district belongs to Qena governorate in Egypt. The town is made up of approximately 35,000 residents. The majority of people work in the craft of handwoven textile.

During the period of the 1970s and before, Naqada was known for this handwoven textile, but the form was different – it was a form of silk, and it was called “ferka”. It was like a long scarf with all kinds of colors: red, green, yellow, white, black. And it was exported to Sudan. There was a trading relationship between Egypt and Sudan. And a lot of these exported products were made in Naqada. 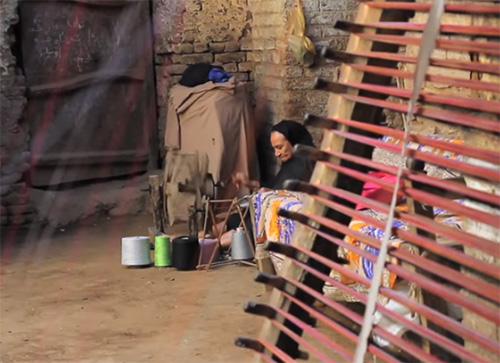 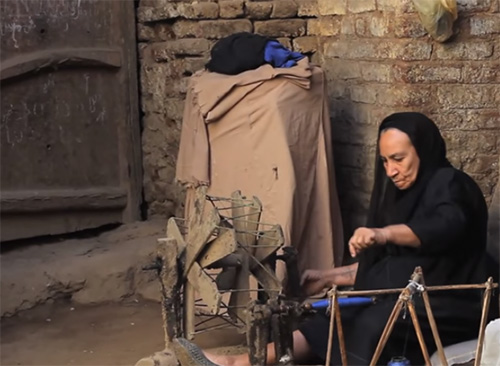 Craftswoman spinning the yarn. She takes huge spools of threads and divides them into smaller bundles

“The loom raised our kids and raised me, and raised our grandparents since thousands of years ago, since Pharaonic times. It is the gift from God to us. It taught all of these generations, that’s what the loom did”, says Om Mariam, one of the craftswomen from Naqada.

The handwoven textile craft is a craft since the beginning of time. Locals have inherited it from their grandfathers. Everyone works in textile: the kids, fathers, girls, and mothers. The good thing about this craft is that all members of the family work in it. This is a small town, but it is known for being educated (even high educations, too); they go to school, but they also work in the craft. 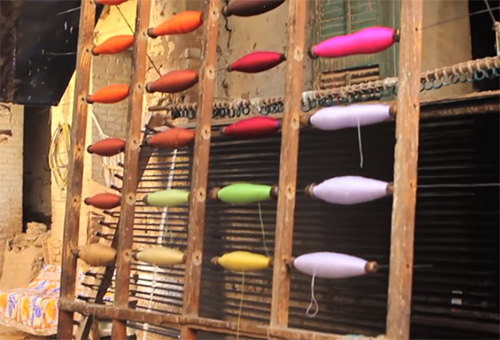 Colorful spools of threads. The craftswomen chose those colors which will be used for a certain scarf

“When we were young, we learned how to do this. We learned to spin, we saw our parents spin and we did like them. Sometimes we stay from morning until noon, we spin until all the yarn is finished”, Fadda, Naqada artisan, tells us.

For every piece of weaving a certain design is made up. They don’t just take random colors, but only certain threads that suit the design. After they set the design, they put the threads through the hoops of a special loom. The threads are very thin – if there is no hoop, the craftswoman won’t feel them, without the hoops it won’t work. These hoops are protecting the threads and keep the design intact; if we put them without hoops, the threads will mingle. 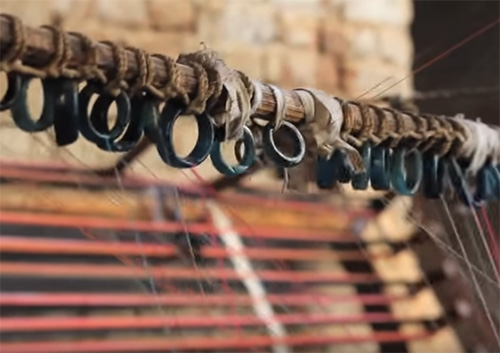 Hoops of a special loom with threads put through them

There are 2 columns of wooden sticks on the loom and the threads are stretched between these sticks and around each of them in turn. The length of thread between two sticks on the opposite sides of the loom is called a “round”. The cycle of weaving is an average of 120 or 95 rounds depending on the length of a scarf. Each round is 2.5 cm of the ready scarf’s width. The craftswomen keep making these rounds until they get the amount of cm they want in the scarf. For instance, if they want 50 cm wide scarf, they make 68 rounds for it. 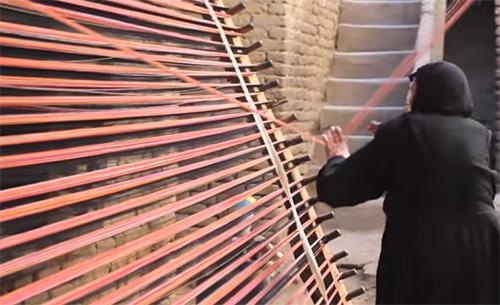 Making a “round”. Two columns of wooden sticks are on the loom, and the threads are stretched between these sticks and around each of them

After completing the wanted number of rounds, the craftswoman braids the threads like a hair braid. These braids help to hold each thread in place, not tangle, not slip away. The braids are woven into a large ball (a kind of like a ball of yarn but much bigger) to prevent from tangling.

The threads are braided, and the braids are woven into a large ball

And then, the bundle of threads is put to the poles before weaving them into the fabric on the loom. The pole has a number of loops made of white threads, and each colorful thread is put through its own loop. There are 3 poles with these tiny white loops, so the craftswoman does it 3 times, and then, puts a comb to the threads, like a hair comb. Those poles organize the threads for the loom, each thread is separated from the bundle. 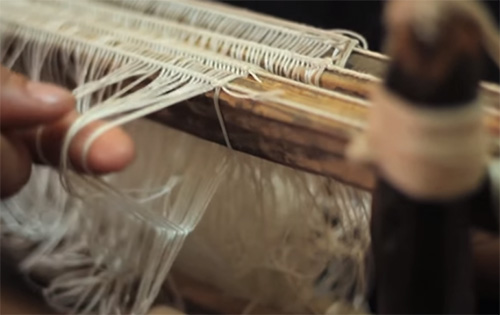 Three poles with tiny loops. Each colorful thread is put through its own loop

“They didn’t make us go to school, they taught us this work. We love it, isn’t this what we eat from? This is how we make a living. I have a girl and a boy and their father passed away. The girl is in 2nd grade and the boy is in 6th grade. To make enough for my family, I used to spin, then if I have a yarn ball I would do this stage too [to attach the threads to the loom’s poles] to step up. After that, I spin again”, says Om Abanob, one of the craftswomen.

The craftswoman counts the threads and marks the middle. It has to be the middle exactly because if it is not, it won’t work. The artisan after her won’t be able to work, and she would have to undo it all and do it again.

“This is the craft that we eat and drink from. We used to also do the loom, but the tourism and the textile industry was hit. God taught us this craft so we work and eat from it, me and my sister with her kids”, adds Sadiya Lamiee, the Naqada artisan.

Here everyone plays a role, from the producer to all members of the family. It is a teamwork altogether. Some people invent the design and chose colors (they find out which combinations of colors and shades are trendy or popular), others are only responsible for their piece of work (spinning, measuring the needed amount of threads, weaving, etc.).

Mariam is responsible for weaving on the loom. She uses vintage traditional wooden loom with two pedals. After the yarn ball is fully done by artisans on the previous stage, Mariam starts inserting the yarn into the loom. She spends half of the first day to just set up the threads into the loom. And if everything is ok and the craftswoman who prepared the threads for weaving has done everything right, Mariam starts the process of weaving at last. 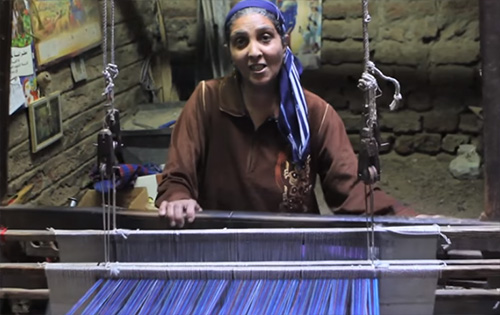 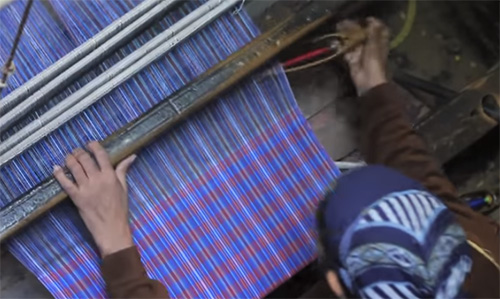 Craftswoman working on a vintage loom

“People in all of my street used to work in textile, now only me remaining and my sister in another street. And another neighbor working, that’s it. The remaining people are either government workers or constructor workers or people who work by the day, etc. One works as a blacksmith and such. The young ones don’t want to work in textile. They say the loom won’t pay enough for the food, rent, and cigarettes – it won’t be enough for their expenses. But for people like us, we have to work in the loom, we were raised with it”, says Mariam, the weaver.

When the scarf is 10 cm extra in length, the artisans then have to take out each thread one by one. They take it out one thread at a time, measure again, and take it out thread by thread. It is tough. Can you imagine the amount of work used to make one little scarf?

When the weaver is done with this step, she gives it to another family member, her daughter or daughter-in-law, to finish the ends of the scarf. Then they wash it, iron it, and pack it.

At last, the scarf is ready for sale. Several people worked to make this scarf, each one did his/her fair share of labor. But, of course, these accessories aren’t too expensive. Today, similar pieces are factory-produced and they fill the market full. Though, you can never compare machine-made and handmade products. So, if you can afford it, choose handmade clothes because such items support and develop the traditional crafts and help local people to earn a crust.