Tunisian male jebba is one of the oldest Tunisian cultural garments

This opulent robe adorned with traditional embroidery looks regal and respectful. It adds a man the atmosphere of dignity and wealth. This folk garment is one of the oldest Tunisian pieces of clothes, and its cut, decorations, and appearance can tell a lot about the wearer, as they depend on the region of origin of a person. Artisans from different areas of Tunisia know their unique secrets of making jebbas that are passed from one generation of craftsmen and craftswomen to the next. Tunisian men’s jebbas are so beautiful and comfy outfits that the local men wear them even today.

A jebba robe originates from the Arab and Ottoman cultures, it is sort of a mix of these two clothing traditions, and it adopted the best features from them both.

Basically, a jebba is a long and wide robe with long sleeves. It covers most of the body of a wearer, except for the head, neck, hands, and feet. This loose garment is never worn over the naked body. Usually, Tunisian men wear a full set of clothing that includes a white shirt, a vest called “farmla”, loose bloomers called “sarouel”, a silk belt, a jacket called “mentane”, a jebba robe on top of all that, and traditional shoes called “balghas”.

A jebba can be made from linen, silk, or wool fabric. Silk jebbas are the most popular Tunisian festive garments, while linen and woolen jebbas are used in day-to-day life because they’re cheaper.

A jebba usually reaches mid-calf-length, but it can be ankle-length as well. 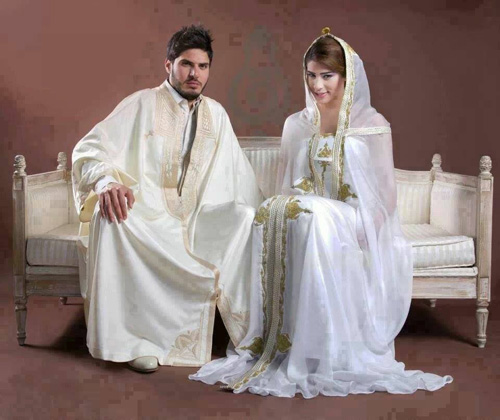 Tunisian couple in wedding clothing. The man is wearing a white harir jebba

It should be mentioned that there are several types of a male jebba, depending on the purpose, material, color, and embellishments:

A jebba is a decorative garment. It is always adorned with embroidery. Most of the needlework is on the neckline, chest, and seams. A small amount of embroidery we also see on the cuffs and hem. But the patterns, color of threads, and where needlework is placed depend on the region of Tunisia.

A modern jebba is very popular apparel among Tunisian men. These robes look rather contemporary and bright, but the cut mostly remains traditional. Though, the same embroidery can be applied to more modern garments – jackets, vests, shirts, etc. They look very similar to a traditional jebba but aren’t the same garment. A jebba and similar outfits are especially popular as festive wear and ceremonial wear in Tunisia. 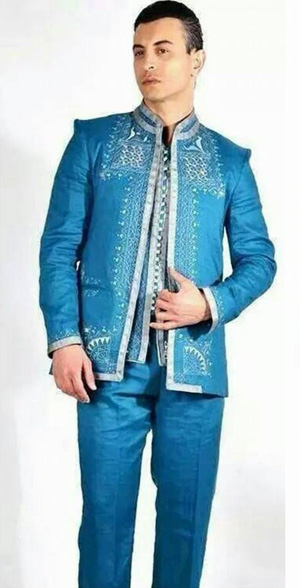