Greek men’s folk costume is very unique comparatively to many other national outfits around the world. Just look at the pleated fustanella skirt (Traditional male attire in Greece often includes fustanella) and you’ll understand what we mean. Another interesting part of Greek male attire is the traditional shoes with large fluffy pom-pons. In the past, thousands of men wore this footwear, but they are used even in the 21st century. Soldiers of the Greek Presidential Guard wear tsarouchi shoes, along with the rest of the folk costume.

These are modern Greek tsarouchi. They are black with a bit of white trimming and luxurious black pom-pons on top of the toe. You can also see the decorative tassels worn just under the knee. 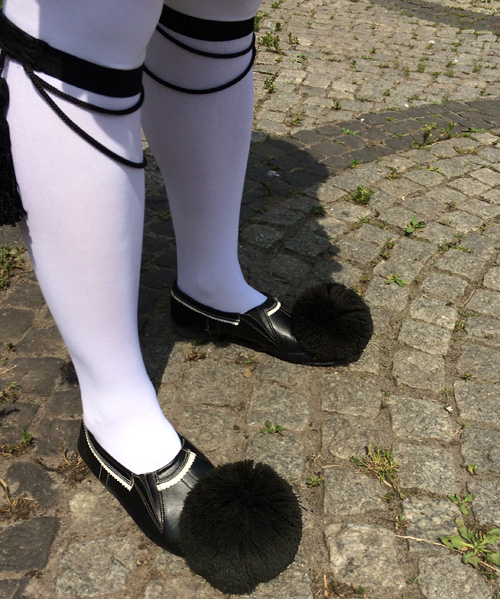 And now let’s dig a little into the history of this footwear. These shoes have gone a long way and were used throughout centuries. Their shape was formed during the time of the Byzantine Empire, with the pom-pons coming in later. Today, they are associated with the Greek, but similar shoes were used all over the Balkans, Turkey, etc.

Until the early 19th century, tsarouchi were used by people both from rural and urban areas. After Greece gained independence (in 1821), they gradually turned into footwear for the rural area and nomadic ethnic groups. Though, tsarouchi didn’t disappear at all.

As soldiers who fought for Greek Independence wore tsarouchi, this footwear is valued and respected as an important part of the local heritage and culture.

Greek army used such shoes with reinforced sole throughout the first half of the 20th century. Even today, they are part of the uniform for the Greek Presidential Guard (ceremonial infantry unit). If you’ve traveled to Greece, you might have seen men in traditional clothing standing in certain places where they stand guard.

The tsarouchi are most often worn by Greek men but women sometimes use them as well. These shoes are rather comfy, with extravagant look. They are made from coarse leather and fitted tightly to the foot. The sole is flat or with a tiny heel. The toe is pointy and adorned with a large woolen pom-pon. Sometimes, other decorations can be used as well – embroidery, stamping on leather, incrustation, etc. 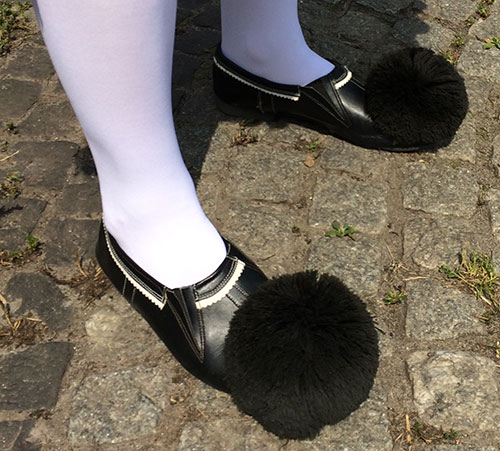 Everything in tsarouchi shoes is symbolic. They are often red, which symbolizes the blood of the Greek ancestors who fought for freedom, with a black pom-pon, which is the reminder of 400 years of slavery. Also, this pom-pon is to embody the little tree of liberty. There is a hidden blade on the tip of a shoe sometimes, which symbolizes the kick that Greek men gave their enemies who tried to take their freedom. And one more meaningful feature of Greek Presidential Guard’s shoes are 50 nails on the sole – the wearer stomps while walking so that the ancestors heard that Greek people are still alive and free.

It’s amazing how these people value their independence, freedom, and the effort made to gain them.

These days, the Greek wear tsarouchi shoes only as ceremonial and folk item, not everyday footwear. The national costume of Greece is often complemented with these shoes, so you can see them during folk festivals and traditional celebrations. Though, some designers even created modernized tsarouchi with a mix of authentic and contemporary features.