We’ve actually got some knowledge as to how the Ancient Greeks dressed. We see it in Ancient Greek statues, wall art, and other similar art objects. But it’s not enough to fully appreciate their outfits. We know the design, the shape, the silhouette, but there are several aspects we can’t highlight. For one, the colors and patterns of the fabrics. It is hard to learn much about something that happened 3,000 years ago. Especially, when we’re talking about things as fragile as fabrics. But we can share with you the info we have.

Ancient Greece is a civilization that existed in the 12th-9th century B.C. It is famous for its rich culture (art, music, crafts, etc.) and huge progress in many fields of science, such as mathematics, philosophy, etc.

Let's take a look at the classical Ancient Greece costume.

The kind of clothing worn in Ancient Greece was loose and flowing and hardly were the garments ever sewn together. The fabrics were mainly linen and wool.

Women also wore a veil with their clothing whenever they stepped out of the house. And by the way, women were not encouraged to go outdoors.

In fact, the Ancient Greek fashion outlook was quite modern as far as men were concerned, to the extent that male nudity was no big deal in Ancient Greece. Guys could go out with minimal clothing, whereas a woman actually had to be quite fully dressed.

There are 3 items of clothing that made up the Grecian wardrobe.

It was worn in the Ancient Greek society by men as well as women. It was a unisex item.

This was a form of clothing that was very popular. The chiton would be worn with a himation or without a himation – we will talk about this garment below.

A belt was also often worn with the chiton. This was called a “zoster”.

The Doric chiton consisted of two pieces of cloth, which were rectangular in shape, and worn long and then secured on the shoulder on either side with clips.

Let's look at a Doric chiton in detail. Generally, there are two pieces of fabric and the front one has an overfold, so it's longer and you fold it over to make sort of a flap. Sometimes the chiton is made out of one long rectangle which you would fold over and then wrap around you. You would wrap it around and then you would pull the front part and the back part up and clip it on your shoulders. Then, it was belted. Despite the fact that it was open on the side, there was so much fabric that you didn't see the opening.

As we know, these chitons would be very colorful. Time robs history of color – we see Ancient Greek statues white, without any color, but in real life, women wore bright clothes.

Here is the Ionic chiton. It has longer sleeves with clips running up the sides. 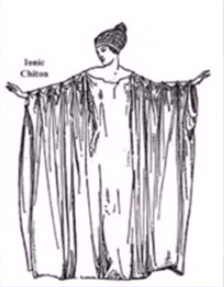 The chiton is a garment constructed not by sewing but by clipping, wrapping, and folding. It's warm in Greece, they didn't need a lot of stuff going on.

Men wore chitons as well. The chiton is not a tunic because tunics consist of two pieces of fabric, which mirrored each other, that were sewn together with gaps for the head and arms. The chiton is completely different.

The second mainstay of the Ancient Grecian clothing was the peplos. This garment was sewn. It was a tubular-shaped piece.

Women often wore the peplos. It goes back to the period before 500 B.C.

Peplos was made from wool. It was convenient because the wearer could adjust the garment to her height. The traditional length of a peplos was to the ankles.

The top layer of the cloth, which draped at the waist, often gave the appearance of a two-piece attire. The women’s arms were left bare.

There are certain types of patterns that were used for the peplos. Some of the common patterns included checks, flowers, waves, or even stripes.

How was it worn? You make a tube, you fold it over (in relation to your height) at the top, and then you step into it, pull the tube up, and gather the fabric on each shoulder.

It was outdoor wear. Basically, the himation was a long piece of rectangular fabric (usually, wool or cotton) that was used sort of like a cloak. Not a toga, but it's toga-like.

Men would wear himations with nothing on underneath. Occasionally, there could be a tunic, if the weather was cold, but, generally, not. 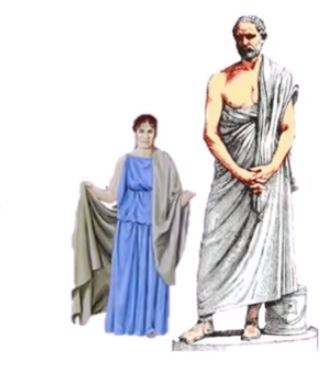 When the himation was worn solo, it was known as the “ochiton”.