We’ve already talked a lot about the clothing in Ancient Greece and it’s time to find out what accessories, jewels, and hairdos people used 3,000 years ago. Ancient Greece was a rather developed and highly civilized state, so even that long ago, there were many seemingly modern items available to them. Like brooches on clothing, comfy and open leather shoes, or hair jewelry. It’s amazing how long and complicated a history our familiar accessories may have!

The main jewelry piece in Ancient Greece was a fibula, a special brooch or pin. It gave Grecian clothing its structure because, basically, Grecian outfits are just pieces of cloth draped in a certain way. So, fibulae held Grecian clothing in place. 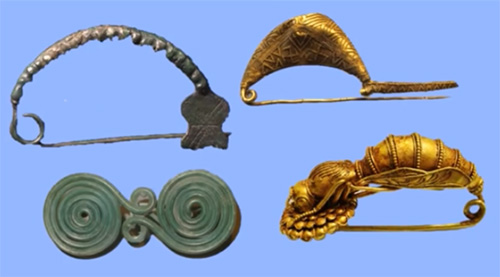 These jewels were of a different design. They usually were made of bronze, unless you were terribly rich and your fibulae were made of gold. Some brooches were simple and crudely made, others were very beautiful and elaborate.

Let’s touch a little bit on the armor. The armor in the ancient world was a very important part of the wardrobe. And Greek armor was very elegant. These wonderful, stylized long helmets with these almond-shaped holes for the eyes; breastplates that were fashioned to duplicate and mirror the male torso; these beautiful shields and leg protectors. But what really gives the Grecian armor its look are these high, stylized, feathered plumes on the top of their helmets. 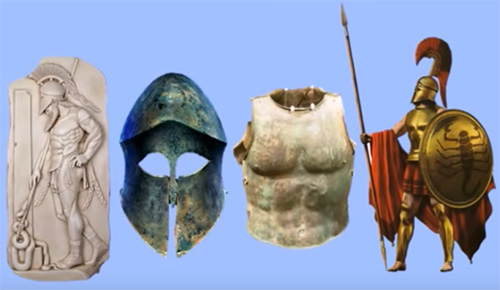 In the early days of Ancient Greece, men wore their hair rather short and grew beards. Later, beards went out of fashion. Greek women preferred their hair very long and spent a lot of time styling it (they curled and braided it). Women often tied their hair back and put in into a bun. Only slave women wore short hair. 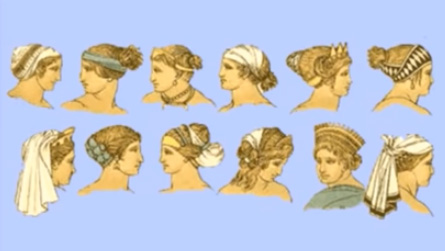 Here is a whole variety of Grecian hairdos. These are taken from statues. Also, you can see that there was a lot of accessorizing that went on in hairdos. During the Hellenistic Greece, hair was generally worn up and often braids and cloths were incorporated and intertwined and braided into the hair. And, of course, there was hair jewelry as well – beads and pearls, etc. They would be incorporated into hairdos.