What did they wear in Ancient Greece? Mycenaean attire

The fashion traditions of this Ancient Greek culture brought us the tunic. They were the first – by the way, men, because Mycenaean women didn’t wear tunics – who used this garment and made it so popular that it was warn in Greek, Roman, Dark Age, and Medieval periods. More than that, a tunic is still a popular garment today. Of course, Mycenaean tunics or other garments haven’t survived till this day, so we can’t see them in a museum, but there are some pieces of wall art that we still are able to see and be convinced that Mycenaeans really wore tunics.

The Mycenaean civilization was a Bronze Age civilization in Ancient Greece that existed in 1600-1100 B.C. It was a rather developed society, particularly in engineering, architecture, and military areas.

But how did they dress?

It's often similar to Minoan clothing. In fact, there is little to distinguish Mycenaean female costume from Minoan female costume, other than the fact that they occasionally covered their breasts with either an inner garment, a bodice structured to cover the breasts, or (more probably) just a piece of fabric tucked into their tight-fitting, scallop-shaped bodices. Yet, this covering of the breasts probably had more to do with a fashion fad than any kind of modesty.

Its Mycenaean male fashion that really changes things up. Men wore tunics, they did not just wear a loincloth and a fabulously feathered cap, they wore structured tunics. The sleeves usually fell just before the elbow starts. The necklines were square and trimmed. 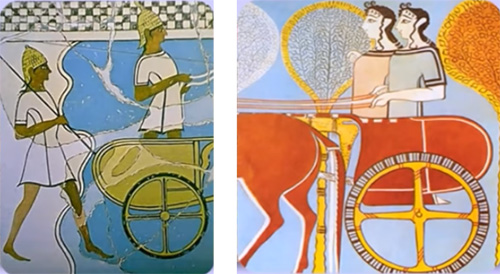 So, Mycenaean men abandoned the solitary loincloth in favor of these elbow-length, trimmed, boat neck tunics. And after that, the tunic would become the foundation for clothing throughout the Greek, Roman, Dark Age, and Medieval eras. For both genders. It also would be worn as an undergarment in later centuries. The tunic is still worn today, and is arguably fashion’s biggest and most enduring success story.