In the Netherlands, there are 14 provinces and each of them has its own style of national attire, its own traditional accessories, etc. But despite certain features and items of clothing unique for a certain region, there are some general characteristics typical for all Dutch traditional costumes. In this post, we won’t talk about the differences between these regional outfits, rather we’ll look at the common features.

The traditional male attire in the Netherlands consists of a shirt, loose or even baggy trousers, a jacket or vest with suspenders (or another outerwear), a headdress, woolen knit socks, and wooden shoes called “klompen”.

Dutch men typically wear loose-fitting shirts – white and navy blue shirts are the most common. Often, these shirts are adorned with a row or 2 rows of brass buttons that are both functional and decorative.

The jacket is usually black, red, or blue, fitted, and long-sleeved. When a Dutch man wants to wear something less warm and heavy, he might use a vest with suspenders. 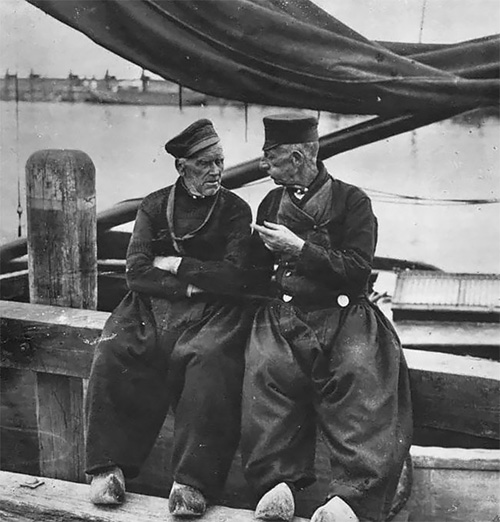 Dutch male pants are really interesting. They’re usually dark-colored and loose, knee-length or ankle-length. But sometimes, the trousers are not just loose but baggy. And most often, they’re not tied at the ankle – as it’s typically done with baggy pants – the wide pantlegs just hang down at the ankle. Such trousers were popular in the Netherlands even in the 20th century, when they were called “worker pants” and used by fishermen, heavers, and men of other working professions. Probably because they’re comfy. You can find plenty of old photos depicting Dutch men in such baggy pants. Dressed in wide trousers and wooden clogs, they look charming, like some surreal fairy-tale characters. 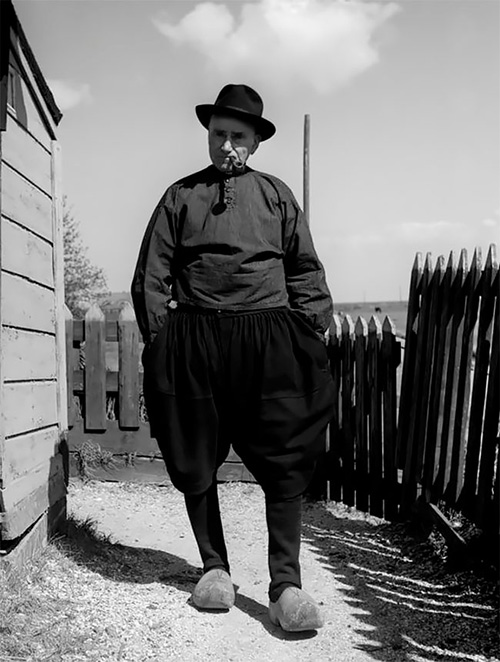 And Dutch traditional footwear is famous worldwide. You’ve probably heard or seen photos of these charming wooden shoes called “klompen” or “clogs”. Each shoe is hand-carved from a single piece of wood, it’s durable and protects the foot perfectly. Besides, wooden shoes never get wet, unlike canvas or leather shoes, which is important when you live in a humid climate or do fishing for a living. Wooden footwear might look coarse and uncomfortable, but people who’ve tried them on actually say these shoes are surprisingly comfy. Although, you have to wear thick woolen socks to prevent blistering your feet. 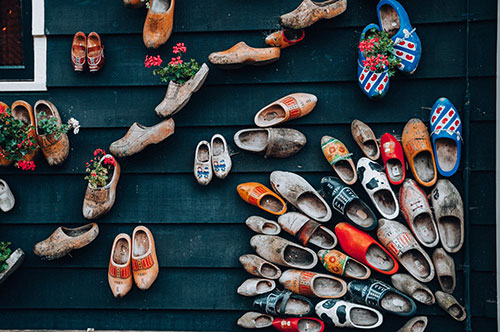 The national female outfit in the Netherlands includes a blouse (usually white), a bodice or jacket, a long wide skirt, an apron, a headpiece (most often, a Dutch bonnet), woolen knit socks, and wooden shoes called “klompen”.

The shirt is a bottom layer, it served as underwear in the past. It was typically white and has sleeves – either long or elbow-length, or short. The bodice, worn on top of the shirt, practically always had long sleeves. It was dark-colored, sometimes matching the skirt in color and fabric, but not always. Over the bodice, Dutch ladies could use a kerchief or shawl thrown over the shoulders.

The traditional skirt is long, usually ankle-length or mid-calf-length. Dark colors are most typical, or women also wear striped skirts (or striped aprons over dark-colored skirts). The skirts are woolen, warm and heavy. By the way, the woolen fabric is a wonderful choice for cold sea regions because even when it’s wet, it still feels warm, when other fabrics start to cool you down.

The aprons are diverse – cotton, linen, woolen, and silk, plain and lacy, striped and single-colored, embroidered and simple. Most aprons were simple and functional, used by the peasant women, but there were also festive and rather decorative aprons for special occasions and noble ladies. 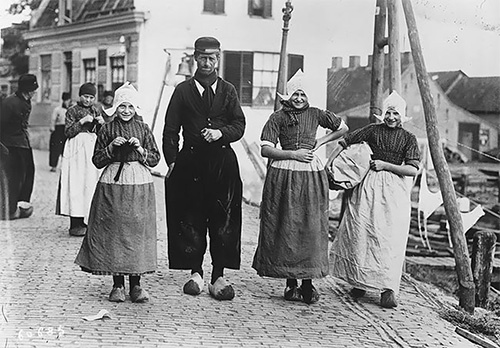 Dutch female headdresses are lovely. The most common choice is a so-called “Dutch bonnet”, a beautiful starched white lace bonnet. This headpiece is a trademark of the Netherlands recognized all around the world. But this is not the only headwear used by Dutch ladies – different regions of the country have their own unique bonnets, caps, and hats. Some are peeked, others flat or round; some are simple, others are decorated with lace or embroidery; some are small and worn close to the head, others are large and elaborate, etc.

If to talk about traditional footwear, Dutch women wear the same wooden klompen on top of warm woolen hand-knit socks.