The interesting thing about the United States of America is that most of the citizens are descendants from European settlers, and they often maintain the clothing traditions of their ancestors (English, French, Dutch, Portuguese people). Dutch folk costumes are among the most outstanding and even weird garments for Americans. And you’re able to see such outfits with your own eyes during the Tulip Time Festival held in a Holland city, Michigan, the US, every May.

In America, there are even several craftswomen who design and produce Dutch folk costumes. And this clothing is really authentic and accurate because the craftswomen are descendants of Dutch colonizers as well. They do research, visit the Netherlands, contact ethnographers there, and go for any other sources to learn more about their native outfit. Phyllis Zylstra and Jackie Craver are among such American craftswomen. They are experts seamstresses who have used their talents to create a beautiful array of Dutch costumes. Each year the dual selects and creates the court costumes that will forever mark this elite group as royalty. They make masterpieces of clothing to wear themselves or sell those garments to customers.

The female folk attire of the Netherlands consists of a shirt, a colorful tunic or a tight-fitting embroidered vest, a wide ankle-length skirt, an apron, an intricate headdress, thick woolen socks, and wooden clogs called “klompen”. Also, a woman might use a shawl, a knitted pouch, and in some areas, suspenders.

The male folk attire of the Netherlands consists of a loose-fitting shirt, a vest or/and a coat, loose-fitting trousers (in some regions, with suspenders), a hat, thick woolen socks, and wooden clogs. 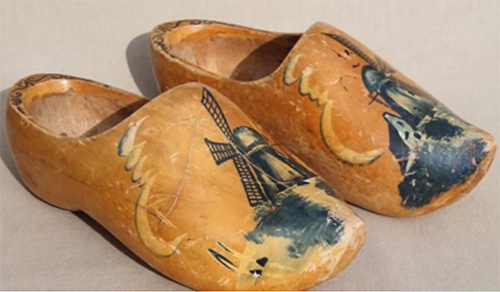 One of the well-known attributes of Dutch traditional attire is the wooden clogs – unique footwear used in this country. Wooden shoes are still worn even today because they're practical. Would you believe that?! The thing is, in the Netherlands, the ground is kind of damp and leather shoes just don't last, like if you're wearing it to the garden or do yard work. So the wooden shoes are more practical for working outside in damp conditions. Of course, people wear thick socks to protect the feet from the raw material of such shoes. 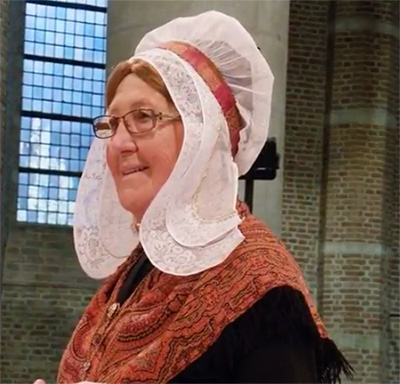 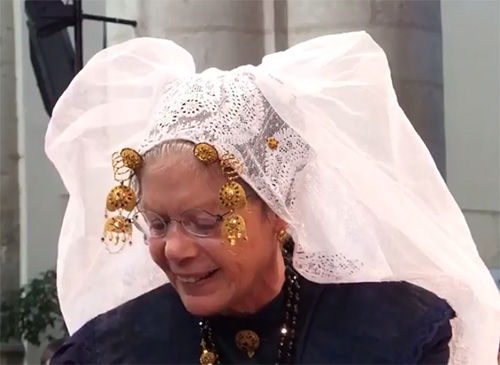 Another famous item of a Dutch folk costume that deserves attention is a headdress. The men’s headgear is less complicated: it is either a wide-brimmed hat, a traditional fisherman's hat, or a flat cap. Female Dutch headdress is much more interesting and special. There are dozens of various shapes and designs, but in general, it is a white lacy starched cap or bonnet.

Tulip Time Festival – great folk celebration in the US

During the Tulip Time Festival, Dutch costumes are very popular. And it is something that surprises visitors. We should say here that some cities in the US were founded by the Dutch settlers, and people still keep their original traditions and remember their roots.

That’s why the Tulip Time Festival is held in the US (Holland, Michigan) every year. Similar festivals are held in many other cities and towns around the United States, particularly in those areas which were founded or inhabited by the Dutch settlers.

What can you see on the Tulip Time Festival? Many various activities are included into the celebration: parades in folk costumes, Dutch Market, different concerts and shows (like the klompen dancing – no way you will see anything like that during other American festivals), craft fairs, and so on.

On this celebrations, the descendants of the Dutch settlers wear Dutch costumes, organize parades and fairs; folk dances and music are seen and heard everywhere. Visitors come to see the tulips, which really are gorgeous. And then they see all the people dressed in their Dutch costumes: the schoolchildren, the Dutch dancers, the street scrubbers – there's just a lot of costume wearing and it shows the pride that locals have in their heritage.

A few words about the history of Dutch folk fashion

Phyllis Zylstra and Jackie Craver shared some of their knowledge about the Dutch traditional outfits, clothing traditions, authentic fashion, and history of the national costume of the Netherlands. 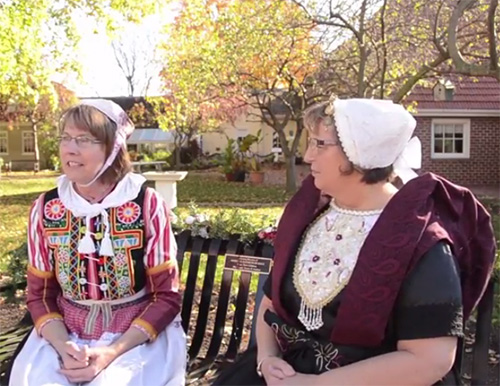 When you think about the Netherlands, the clothing that they wore, their day-to-day clothing is a part of the Dutch heritage, because that's what they would wear in their daily life. The Netherlands started as a very small country with many different costumes. People were isolated and didn't travel much but, as a lot of the research shows, several things influenced the local folk dress. The French fashion often influenced the women's costumes. But also, you will see that they were unique, particularly their hats were unique to their area or to their village.

And another thing, too, there were a lot of sea traders in the 1600s and the 1700s that would go to China or the Dutch East Indies (one of the Dutch colonies; now, it is the territory of Indonesia), and they would bring back beautiful fabrics from those areas. When they brought them back, they wanted their wives and daughters to have clothes made of those fabrics so that they could sort of show off a little bit, it was sort of a sign of their wealth. 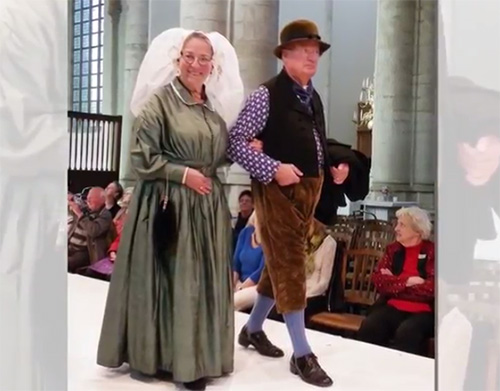 Male and female costumes of the Netherlands

For Dutch Americans, the time period that would be represented most often would be the 1900s to the 1950s. That is the time when a lot of the immigrants were coming to the United States. You can find lots of pictures and costumes from probably the early 1800s through the 1900s that are often incorporated into the costume making as well.

The Dutch craftswomen learned to look at the costumes and figure out how to make the pattern that will fit a particular person. Also, the details of every outfit show a lot about the owner. For example, by the ornaments on the hat and costume, you can tell where the wearer of the outfit lives, in what time period the garment would have been worn, what is the marital status of a person. You can tell their wealth again by the ornament, the amount of decoration they have on their costume, and the fabric used to make the attire.
For an ordinary observer, the national costume is just a beautiful and sometimes odd or impressive outfit. But for a craftsman, ethnographer, historian, or designer, the folk dress of a certain country is an open book that tells dozens of facts and stories about the wearer and his country by its every detail.