Mourning is a usual thing for humans because people die all the time. But these days, it goes easy on us – we don’t usually have such strict rules for mourning as were established in Victorian England, for example. From 2,5 years to eternity of mourning. Wearing only black dresses – sometimes made from coarse and scratchy fabrics, avoiding any social events, forsaking jewelry for years, etc. Though, all of this concerns mostly women, while men and children had more comfortable mourning rituals. But still, some kids, even little girls, could have black mourning clothing. One of such gowns we’ll show you in this article.

In Victorian England (1837-1901), there were 4 periods of mourning: deepest mourning (or full mourning), second mourning, ordinary mourning, and half-mourning. At least, women had all these mourning rituals.

Here is a mourning attire from late Victorian era exhibited in the V&A Museum. It is a pretty ensemble from Great Britain, 1900. The skirt and blouse are made from wool trimmed with mourning crepe and lined with glazed cotton. The waistband is made of cotton twill faced with glazed cotton, and fastened with metal hooks and eyes. 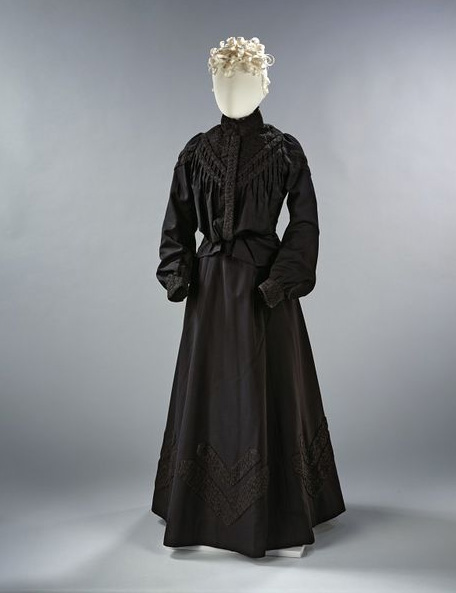 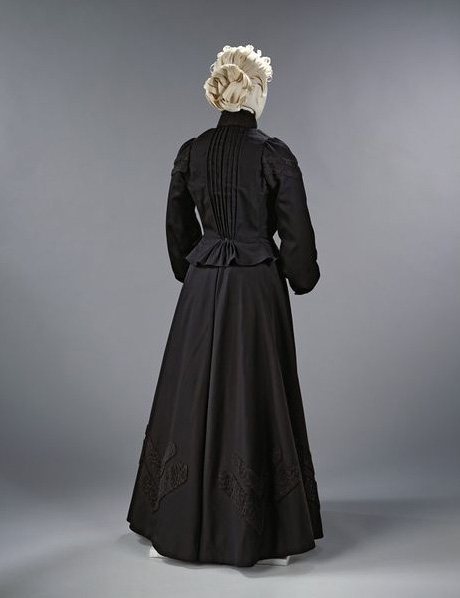 The deepest or full mourning lasted a year and a month after husband’s death. The whole attire of a widow had to be black, every garment. The dresses were usually made from bombazine fabric (wool + silk) and trimmed with crepe (coarse and scratchy silk fabric). Wealthier women could afford non-reflective paramatta silk (fine-quality twill fabric) for their outfits. The headdress for this period was a special mourning bonnet or hat with a black veil. Shiny jewelry wasn’t allowed – only the wedding ring. Also, the person in mourning wasn’t allowed to go to balls, receptions, parties, and other social events.

The ordinary mourning lasted another six months. Females could remove crepe from their attire but the clothing remained black.

The half-mourning period came 2 years after husband’s death and lasted from six months to eternity. The allowed colors for lady’s dresses were black, white, gray, and purple. At last, women could use jewels – pearls and amethysts.

The male mourning ritual – after wife’s death – was pretty easy. Men were to avoid social events for several weeks and to wear a black band on a sleeve for six months. Usually, they wore their usual dark clothes – suits, hats, cravats, and black gloves.

Children normally didn’t wear mourning gowns but, sometimes, girls could wear a white or black dress to indicate mourning. Here is an example of one such dress from the Victorian era. It is a little girl’s mourning garment made of black grosgrain. England, 1882. This gown is from the V&A Museum collection. 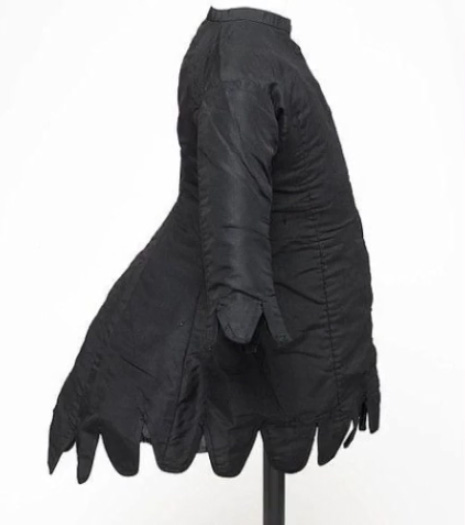