The Elizabethan era occurred in England in 1558-1603, when Queen Elizabeth I reigned in the country. This period is interesting because, for some time, England became the center of fashion in Europe. You might know that in the Middle Ages it was France, in the Quattrocento it was Italy, and now it was the British turn. And people were absolutely devoted to the idea of imitating Queen Elizabeth in their looks. Even men did it, wearing clothing of a very feminized silhouette. Oh, and the ever-present heart shape everywhere!

What it included. Women’s Elizabethan attire

The costume started with a corset. It laces down the front.

This particular corset belonged to Queen Elizabeth I. It's really the only garment of clothing we have left from her reign that she actually wore herself. 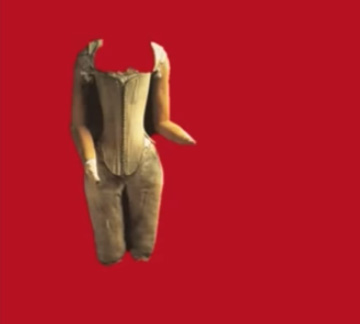 Over that, went your bum roll. It's sort of like a massive doughnut or a life jacket. It's a massive tube that goes around your hips.

Over that – a farthingale.

And then, the gown. But it's missing something at the front…

And a new piece of attire appears – the stomacher. This was a triangular separate garment that would be laced onto your gown and form the front. The stomacher would stay around for the next 200 years or so.

Then, you would have a standing collar. And later, a ruff.

And then, you would top it all off with a jaunty cap.

The silhouette is rather wide at the bottom but quite slender and triangular at the top. But that enormous ruff! It really was all about opulence – the more things you had on you, the more powerful you were, the more fashionable, and the richer. But this look wasn't just for the rich. Everybody adopted this silhouette – the middle class, the working class. 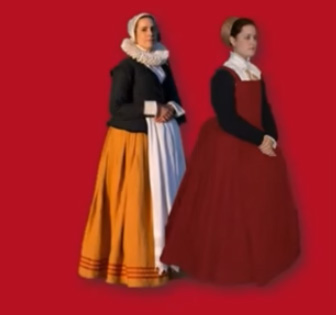 Of course, Elizabeth herself had the widest farthingale, the biggest bum roll. And the ladies of the court also had big farthingales and bum rolls.

Though, you could actually live your life without a farthingale if you were a servant or a milkmaid, for example. And yet, you would still have enough volume in your skirt to achieve this silhouette.

And the headdresses that were worn kind of follow the form of the French hood, except that they were heart-shaped. Everything was heart-shaped on the head in Elizabethan days, including natural hair. People would style their natural hair to take on this heart-shaped form, which they would then adorn with jewels and top it all off with a jaunty little hat. Because less was not more in the Elizabethan era.

Men achieved that sort of heart-shaped look with their mustaches. These lovely elegant long mustaches and these little pointy beards. And they curled their hair, too. Why? Because the Queen had curly hair, she was the dominant force – everybody wanted to look like the Queen.

For men, the whole thing was kind of feminized. Which is why one of the big accessories for Elizabethan men was just one earring in the ear.

What it included. Men’s Elizabethan attire

Let's take a look at Elizabethan male outfit. Though, when we use the term “Elizabethan” at this point, we’re really talking about a trans-European look. England, because of Elizabeth – especially after her defeat over the Spanish, became the center of fashion.

The men’s costume is actually quite easy.

It starts off with the hose and the slops. Slops are short sort of leggings. They would eventually become underpants.

After that, a busk. It is sort of a corset that pulled men in at the waist to give them a more female silhouette, a more feminine silhouette.

Next, stocks. Basically, they're sort of billowing shorts that come mid-thigh.

Then, the doublet. It is a men's snug-fitting jacket that is shaped and fitted to the man's body.

Over the doublet, is the jerkin. And this is a male short close-fitting jacket, made usually of light-colored leather, and often without sleeves.

And last, they put on their boots and their ruff. Men would also wear a cute little cape. This short cape would be worn over one shoulder. And quite a tall hat to make this very lean, slender feminine silhouette.

And this is what it looked like. Really extremely feminine. 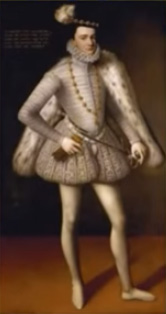 These wide stocks became massive, and they are called “pumpkin hose” or “melon hose” because of the shape of them.

Note also the shape of the torso. Here is an older gentleman in the picture. He isn’t wearing short pumpkin hose, but his torso is weird – it's padded. He has a padded doublet and it is called a “peascod belly”.This puffed up triangulated shape pulls the focus towards the genitalia. Also, it accentuated a small waist, again giving it that very ladylike silhouette. 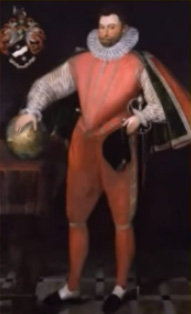 Kid clothing in the Elizabethan era

Though, common sense dictates that when kids were just at home and running around and playing, they did not wear ruffs. The girls probably just wore a kirtle and boys wore a shirt and some hose, obviously. But when they dressed up, they dressed exactly like their parents. Even tiny babies – all children.

Makeup in the Elizabethan period

The Elizabethan era is known for this pasty-white lead-based face makeup. It was known as “Venetian ceruse” or just “ceruse”. It was lead-based, meaning that it absolutely damaged and ruined your skin, which meant you just put more of it on to hide the blemishes. 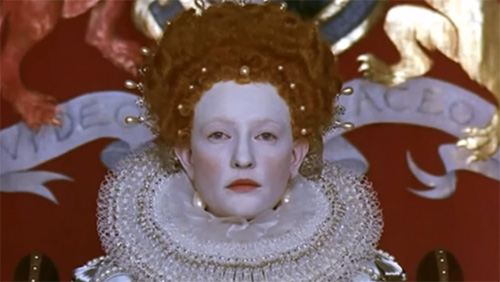 The popular myth is that women in the Elizabethan era whitened their faces to show that they were wealthy and that they didn't have to work outdoors on the farm. But that’s not it. The reason that faces became white with this Venetian ceruse is because Elizabeth was a redhead with very pale skin. She had a very Northern European look, a very English look. The enemy of England was Spain. So during the Elizabethan era, probably the reason for ceruse was to look as un-Spanish and as English as possible. The lovely pale white skin and red hair or fair hair of the English and none of that beautiful olive-toned skin and black hair of the Spanish.

Venetian ceruse was weird and it made you look so completely bizarre.

Also, there was this idea of having these very tiny lips. This was a way of accentuating the whole sort of British Isles’ chic as well. 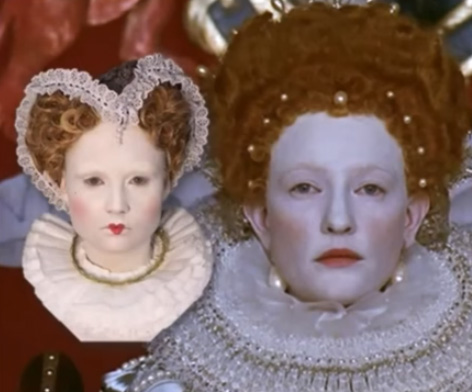 So, basically, the Elizabethan era was a time of imitation. Everybody wanted to look just like the Queen. This is a portrait of Queen Elizabeth and portraits of people who are not Queen Elizabeth.

And you can see that they really are trying to get the Elizabeth look. But it was not only common among women to do that, even men tried to imitate her in their looks.