We’ve all heard about the great northern warriors called the Vikings and their extraordinary culture (just remember their world-famous jewelry). But how much do you know about the Viking crafts and, to be more precise, the Viking spinning? We’d like to show you some tools, techniques, and secrets of spinning use by the Vikings.

Actually, Viking spinners were women. Viking men were off “visiting the neighbors” and very seldom home. So, many Viking crafts were performed by females. 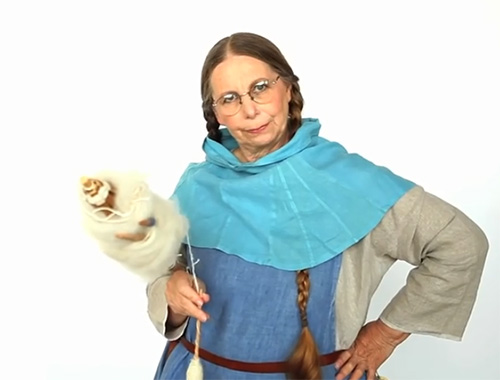 Here is a bunch of Viking spindle reproductions. They were copied from those that were found in Viking women's graves. When the Viking woman died, in the afterlife, she still needed her spinning tool. That’s why archaeologists find so many such artifacts and are able to learn much about the crafts of Vikings. 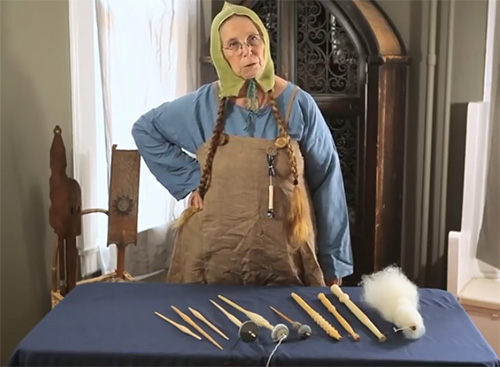 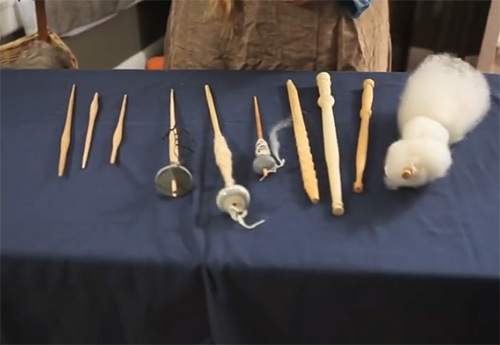 When we look at the Viking spindle and textile finds, we find quite a few Viking’s fiddlesticks. This one is from the 800s. It was found intact with its soapstone whorl on it. They'd also had this v-shaped knock in the stick used in conjunction with the distaffs that were found with it – hand distaffs. We'll get back to those in a minute. 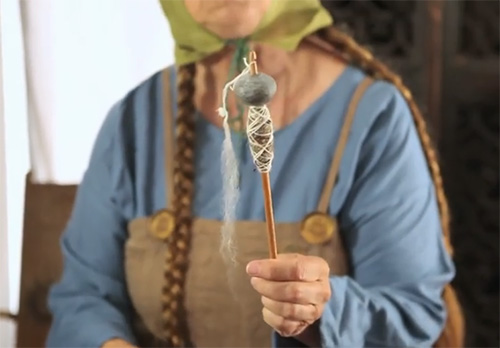 Fiddlestick with a soapstone whorl on it. The 9th century. Reconstruction

Archaeologists can’t figure this out. As the Vikings both spun with the whirl on the top and they spun with weights on the bottom – we know that by looking for compression marks. One of the headaches of a find is that it's been in the grave for a really long time, so the question is, if both ends are damaged, which way did they use it? The other thing that might happen to them is if you have somebody who breaks a tip off and they have gotten their Viking knife out and trimmed it down to keep spinning. 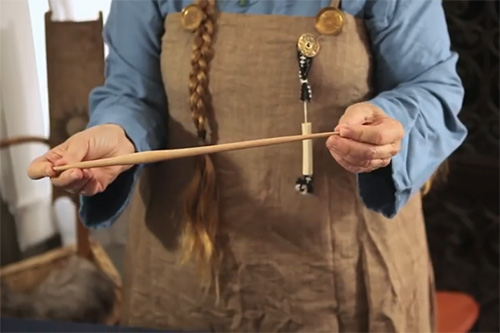 Spin faster, get better yarn. When you have a separate whorl that is very close to the stick, it spins and spins and spins with a lot of revolutions and that's what's lovely about the Oseberg spindle. It means that you can spin really fine yarn because you need a lot of twists right away for thin yarns. With hands, you're going to roll it and snap off a thumb. And there's only so many revolutions you'll get from rolling it down your thumb, and you want to grab the thin part because you can roll it more revolutions when it goes down your thumb. But if you roll it down your thigh, you have a lot more distance to get those revolutions in. It spins longer.

The distaffs are fascinating. It looks like a stick but, of course, the anatomy of a good distaff means that there has to be a place to tie down the ribbon to hold the fibers in place on a stick. The wool basically is going to go with its longest length downward. 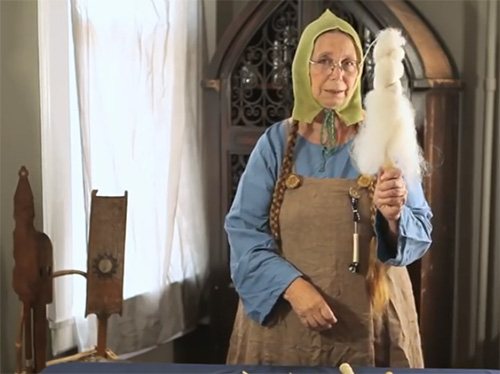 Viking distaff with wool on it

How to attach wool to the distaff? You have to take a wool bag and orient it so that the fibers are situated along the distaff. And the dressing of this distaff is quite simple – you are going to get it fairly close to the top and you're simply going to roll it on. It doesn't have to be tightly wrapped. You do a larks head knot, go around, tighten it, spiral down the fiber (this is to hold it in place while you're spinning from the bottom of it). How far down you go is personal preference – you're going to have to test that out. And you make a half hitch knot to finish off the end of the ribbon. Now it's ready to spin and they're quite interesting because they're so small. 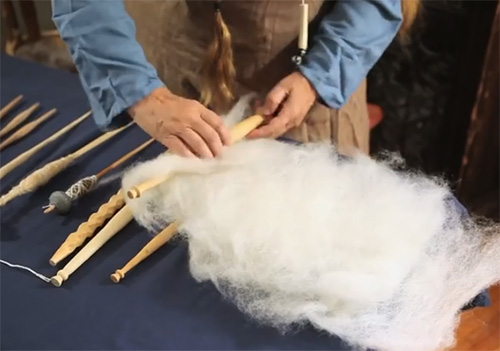 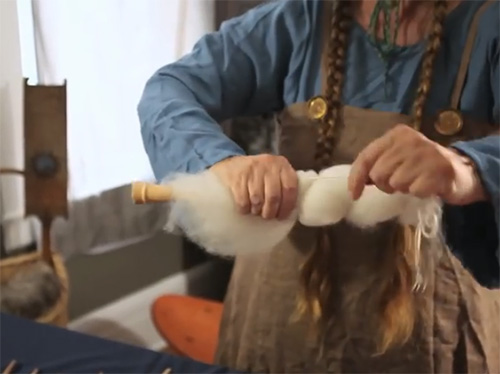 Spin, spin, spin. When you spin, you're going to do it from the bottom, so remember to keep revolving. And you’re also able to use the hand holding the distaff as part of the control of fibers between your two hands. Spread the wool out and get your hand under it. Take the leader from your spindle, lay it on top of this feather dot fiber and spin. 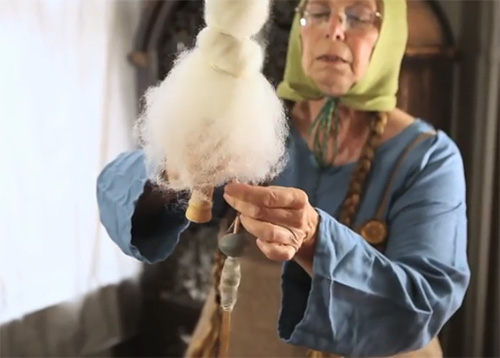