Serbian traditional double-knit socks. What tricks and secrets do they have?

These magnificent folk accessories are among the most precious pieces of Serbian culture – they are traditional double-knit socks embellished with outstanding ornamentation. Each pair of vintage socks is unique, decorated with intricate knit patterns. And, of course, they are a significant part of Serbian national costume. Let’s look at Serbian double-knit socks and find out which tricks and peculiarities they have and how they differ from modern hand-knitted socks and traditional socks of other countries.

Hand-knit socks were a very popular accessory at all times, especially in cold climates and mountainous areas. So, we find knit socks in many folk costumes around the world – in Scandinavian countries (Finland, Norway, the Netherlands, etc), South America (Peru, Bolivia, etc), Slavic countries (Serbia, Ukraine, Romania, Bosnia, etc), some Asian countries (Tibet, Turkmenistan, etc). This handy accessory was used by people for millennia, protecting their feet from the cold and mechanical damage. People wore thick knit socks with rough shoes (wooden or leather) to protect the skin. But also, they wore colorful patterned socks as a festive accessory to add a little bit of beauty to their hard and labor-intensive life.

The design of traditional hand-knit socks differed not only in different countries but even regions, certain villages, and even from family to family.

Man and woman in Serbian traditional clothing from Skopska Crna Gora (Black Mountain of Skopje) near Skopje (capital of Macedonia). The photo was taken at the Festival of folk clothing "Biserna grana", Futog, Novi Sad, Serbia

Serbian folk socks are called “double-knit socks” because the method of making them is special. They are knitted from two woolen yarns. The knitter begins working from the fingertips to the heel and then continues the upper part (from the ankle upward) with 4 knitting needles. We should mention that, usually, the process is done vice versa – beginning from the top and going down to the fingertips. But not Serbian socks.

Another special thing about Serbian traditional knit socks is that each sock has a long string left at the upper edge. It is used to tie the sock to the leg to prevent them from falling down during walking. Natural woolen yarn isn’t flexible and there were no rubber bands in the past, so this drawstring was very handy. 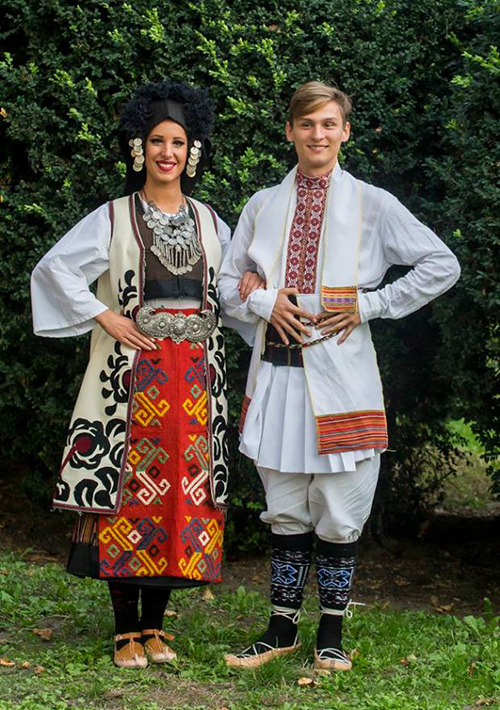 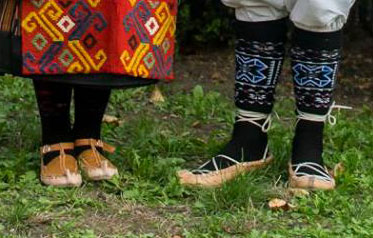 Serbian folk costumes. The female outfit is from Knjaževac (town in the Zaječar District of the eastern Serbia). It is a costume of a married woman. Her headdress is called “krpa”. Under the krpa she has an interesting hairdo called “trvelj” (the hair is braided, 2 braids are twisted around the ears and embellished with coins). The male outfit is from Kumanovo (city in the Republic of Macedonia). Part of Macedonia is called “Old Serbia” because this territory used to belong to Serbia once. The photo was taken at the Festival of folk clothing "Biserna grana", Futog, Novi Sad, Serbia 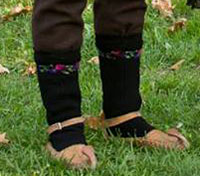 Vintage Serbian double-knit socks exhibited in the local museums and stored in private hands are usually extremely bright, multicolored, and elaborately patterned. But these are festive socks used with so-called “Sunday best” clothes – outfits for holidays, ceremonies, different festivities, and so on. In daily life, Serbian people, of course, wore knit socks as well, but they were much simpler, with fewer patterns and colors. Often, the yarn of only two colors was used to make everyday socks.

Festive Serbian vintage knit socks can be adorned with floral, geometric, animal motifs, etc. The most widespread colors are red, black, orange, with splashes of white, green, violet, pink, and other shades. The pattern on a pair of socks depends greatly on the imagination of their maker and the tradition of a certain village or town, because a lot of knit designs were passed from mother to daughter.

By the way, bright and colorful socks were used by both men and women. Lucky Serbian men also wore them proudly. Unlike many traditional cultures, where male folk costume is a lot less colorful and eye-catching than female traditional attire, Serbian men have enough vivid elements of clothing to look as festive as their female spouses. 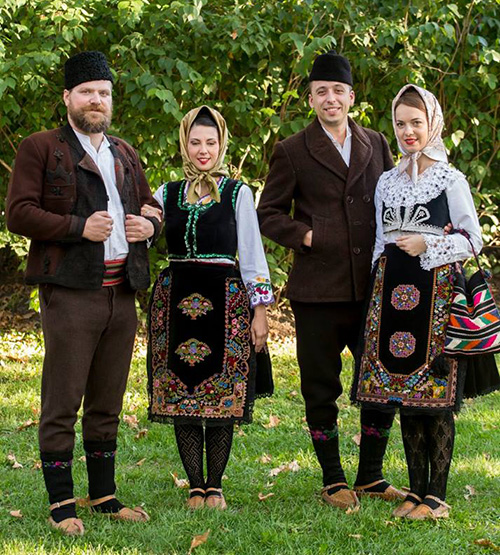 Serbian people in the folk costumes from Žagubica (village in the Braničevo District of the eastern Serbia). The photo was taken at the Festival of folk clothing "Biserna grana", Futog, Novi Sad, Serbia

There is one more curious fact about Serbian folk hand-knit socks – there were no kids’ double-knit socks. For children, the technique was different. Why? Because when you’re creating ornamental motifs with this knitting technique, you get rather thick fabric, and small socks would be too rough and thick, which is not comfortable at all for tender children’s skin.