The traditional outer garments in Poland have always been distinctive, catchy, and prominent, worn proudly by the locals. And they have a lot in common with Slavic typical outerwear in general. Of course, Polish outerwear differs from region to region, as the climate and regional clothing traditions vary as well. But even when a garment looks simple at the first sight, it somehow radiates elegance and sophistication. Take, for example, the popular woolen coat called “sukmana”. It was the clothing of peasants, but how charmingly it is decorated!

A sukmana is a traditional woolen coat in Poland used usually by men, but women also could wear one. This outerwear was popular in the 18th – early 20th century. It is made from natural woolen fabric, hand-woven on a loom. This coat has long sleeves, its typical length is about knee-length, and it is widened a little (or in some cases, a lot) at the bottom. The cut is loose at the bodice, fitted at the waist, and the skirt widens to the bottom. Though, there are variations in design – the cut depended on how much fabric the owner could afford to spend, what his or her tastes were, and what regional peculiarities there were.

The fabric is simple, similar to russet cloth, and often, it isn’t even dyed, just left natural grayish white. Though sometimes, the woolen cloth is whitened to snow-white shade or dyed. So, the typical colors of sukmana can be white, gray, brown, navy blue, and dark green – rather ordinary and unisex colors of outerwear. 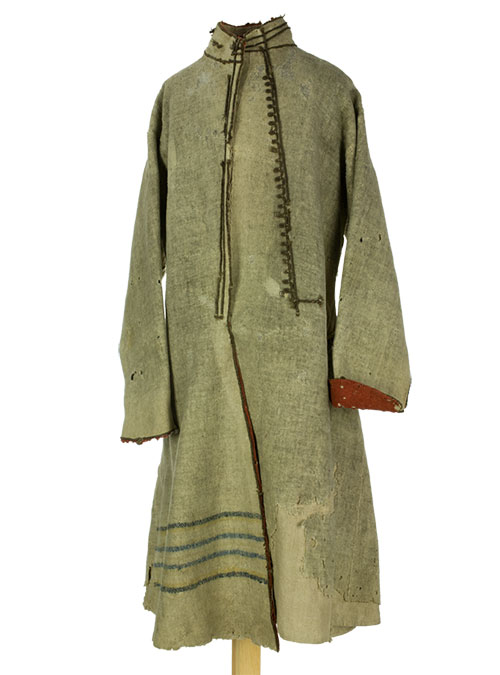 Vintage sukmana coat, Poland, 1794. From The National Museum in Kraków

A sukmana was fastened in the front, it could have hooks and eyes or buttons, or even could be worn open, as this was the very upper layer of clothes. Underneath, a person could be dressed in a jacket or vest and a shirt.

The collar of a sukmana most often was a stand-up collar, but notched collars or very wide collars (something like a decorative cape collar) were also possible. Such wide collars were always ornate and richly adorned with embroidery or other decoration technique. 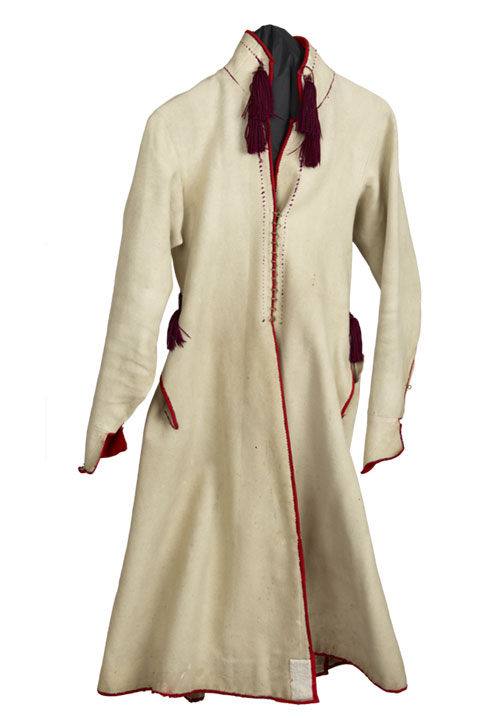 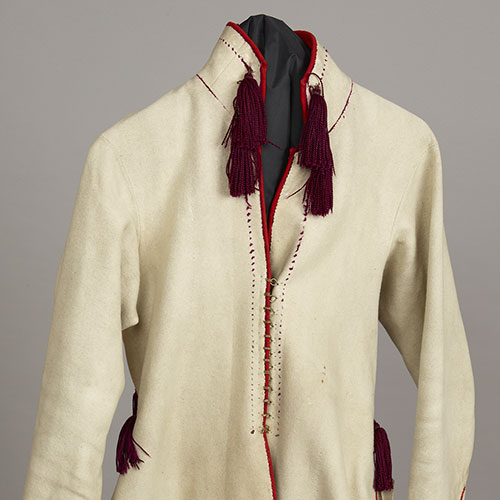 White sukmana coat, Poland, the 19th-20th century. From the collection of Vistula Ethnographic Park in Wygiełzów and Lipowiec Castle

The sukmana coat was historically worn by peasants in Poland, it was a simple, no-nonsense outer garment. But as usual with folk outfits, there were day-to-day and festive coats. While everyday sukmana were very simple, practically without any embellishments, festive sukmana coats were cute and decorative – with embroidery, braiding, colorful borders at the neck and cuffs, cording, pom-pons, various trimmings, tassels, and so on so forth.

Today, a lot of people in Poland return to their roots and popularize their folk culture. The same trend can be found in many countries around the world these days. But Poland is one of those countries where modern artisans recreate and sell authentic costumes to those who want to have one. You can not only buy a ready-made full set from a certain region or city but even order a custom-made attire recreated by the old photos you have in your family or some heritage pieces of clothing. A sukmana is one of those garments manufactured by the local craftsmen (modern replicas of authentic coats are made) and available to Polish folk costume lovers.