Diversity is typical for Polish folk dress. In total, there are 68 different variations of traditional attire in Poland. Impressive, isn’t it? And each of them has some unique features, usually regional. In this article, we’ll talk about the Krakovian folk costume – possibly the most ornate, colorful, and famous far outside the country Polish traditional outfit. Krakow is also one of those cities where the biggest folklore parades in the whole Poland are organized, with numerous participants and dozens vintage and modern folk costumes.

The national attire of Poland is made in a charming Slavic style. And these costumes are really beautiful. The final appearance of Polish folk outfits was formed in the 2nd half of the 19th century – the beginning of the 20th century when the poor layers of society became more involved in the economic and trading role of the country.

At first, these costumes were an integral part of the daily life of Polish people, but later, as factory-made clothes came widely in use, the traditional garments turned into festive clothing worn for special occasions – folk wedding, folk festivals, religious holidays, harvest festivals, etc. 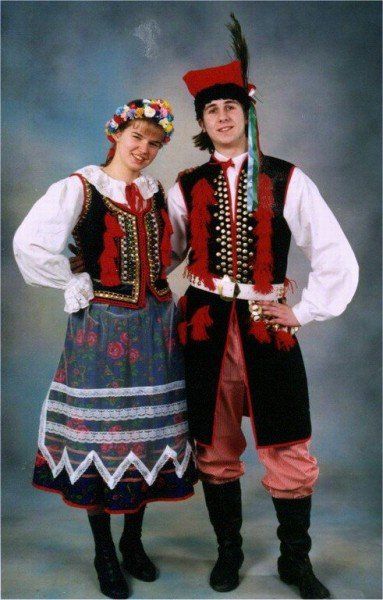 By their looks, the costumes can show the ethnographic region of origin, social status, and marital status of a wearer. A great influence on the garments was caused by the fashion of high society (landlords, noblemen and noblewomen, kings, gentry, etc.) and military fashion. But one of the biggest influences was made by the Baroque and Renaissance fashion styles. All these factors created the colorful, dainty, and opulent traditional outfits of Poland.

Polish folk dress, used by both men and women, is very comfortable and practical. It doesn’t restrict movement in any way, and it seems like it’s created for wearing, not just for hanging on a rack. People can easily walk, run, dance, work in these garments.

Despite the fact that there are over 5 dozen different Polish folk costumes, one particular ensemble is probably the most well-known and ornate. It’s the Krakovian folk dress, named after Krakow, the second biggest city in Poland. Let’s find out what elements this attire includes.

The most recognizable garments are the kaftan and zhupan – men’s outerwear pieces. They are often blue, red, or white, adorned with embroidery, braiding, and other decorations.

Another outer garment is a long vest. It may reach the knees of a man. It is open at the front, worn belted. This garment usually is richly decorated and has two large pockets.

A simple white shirt (linen or cotton) is worn under any outerwear. It usually has a bit of embroidery at the neckline and cuffs.

A belt is an obligatory part of a male costume. If to talk about Krakovian traditional outfit, the belt would be made from leather, light-brown, wide, and ornate.

The hat is very prominent and unusual. It is called “krakuska” and it has 4 corners. Its color is traditionally red and black. The hat is adorned with feathers, flowers, and ribbons.

The main and most recognizable garments are the skirt made from the fabric with floral prints and the tight-fitting bodice embellished with embroidery and beading.

The skirt is below-the-knee length and flaring a little; the fabric has a small flower print, rather bright and colorful. Under the skirt, women wear white petticoats, sometimes with embroidery at the hem. Over the skirt, a lace apron is worn, which is usually sheer and delicate.

The bodice traditionally is black (sewn from velvet, brocade, cotton, or other fabrics) and richly adorned with embroidery, sequins, beads, braiding, and different trimmings. It closes at the front with a row of buttons or with lacing. It is sort of like a corset but without boning.

Of course, any Slavic traditional outfit also includes a linen or cotton white shirt with embroidery and/or lace. Often, the sleeves of Polish female shirts have lace flaring cuffs.

The apparel is complemented with a large kerchief thrown over the shoulders to warm the woman up a bit. It can be red, blue, green, or white, with a large and bright floral print.

White tights and red or black footwear (shoes or boots) are worn as well.

Young maidens wear their hair in 1 or 2 braids and embellished with flowers and ribbons. Married women cover their heads with a kerchief or scarf, a coif is often worn underneath.