This is a modern replica of attire typical for Eastern Europe, particularly Poland, the beginning of the 1500s. Such gowns were already out of fashion in Western Europe, but Eastern European women still widely used them. Especially the wives and daughters of handicraftsmen. Let’s see what pieces such outfit included, how they were put on, what construction they had, and what accessories complemented the costume. This is a great chance to look under the main gown that we can observe in old paintings.

The main dress in beautiful green color is a replica of authentic gown depicted in the “Balthasar Behem Codex”, an illustrated book created in Kraków in 1505. This edition is highly valued by its great and informative illustrations.

This attire has a traditional Gothic silhouette – triangular neckline, high waistline, and wide A-line skirt. And the headdress is a little bizarre. By the way, Gothic period in fashion ended around the 1450s, much earlier than the period we’re talking about. But let’s look further at this gown. 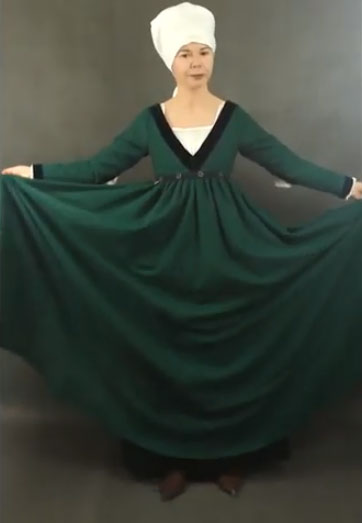 The first detail that is not traditional for Gothic fashion are slits on the sleeves. This trend was extremely popular in the early 16th century. Before that, for centuries, it wasn’t socially acceptable to show the chemise worn underneath a dress. But when this tendency to slit the sleeves appeared, it quickly spread because people perceived a touch of flirt and intimacy in it. Both men and women of different social classes and status wore clothes with slitted sleeves. 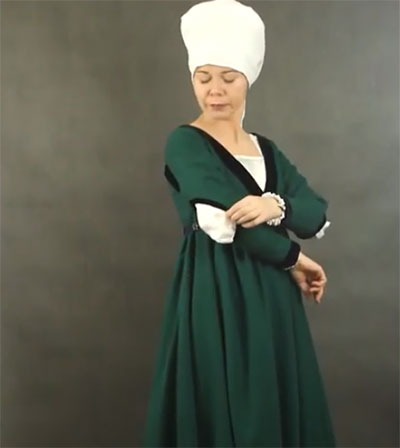 This dress is made from woolen fabric, with lining. It weighs about 6 kg. It’s sort of an outer garment but cuter and more tight-fitting than a coat. The lining is in linen – fine thin linen on the hem and coarser linen in those places where it isn’t seen. This was a usual way of saving money, and we can find similar tricks even on royal garments. Other variants of lining for such dresses were fur, velvet, or any other expensive fabric, but only wealthy women could afford it. Sometimes, they only trimmed the neckline and cuffs with velvet to add some chic. 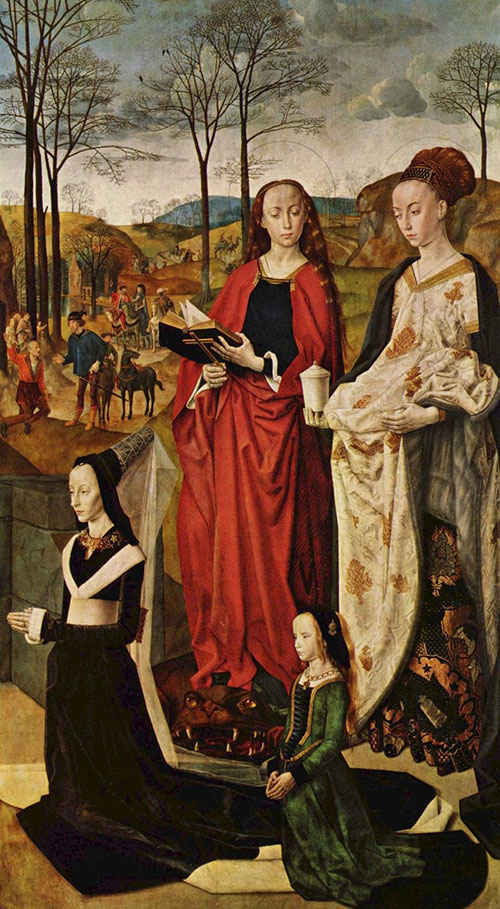 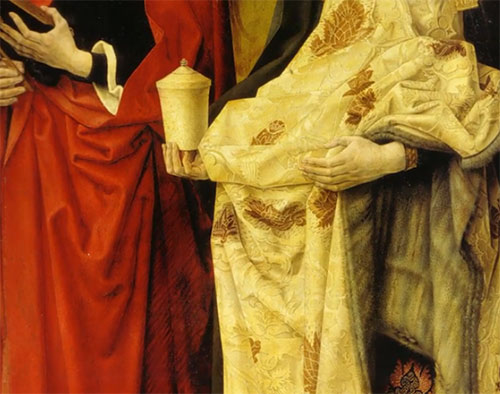 “Portinari Altarpiece” by Hugo van der Goes, circa 1475. Her gown is lined with fur

This dress is laced at the front and belted. To take it off, you have to unfasten and shrug the garment off so that it falls to the floor.

The headpiece is called “steuchlein” and it’s from the German fashion. You can see this headwear on many German paintings, etchings, and drawings from the beginning of the 16th century.

“Woman from Nürnberg in a dancing dress” by Albrecht Dürer, 1500

Basically, the headdress consists of two parts: a thin linen veil and a linen coif. The coif has an interesting construction – there is padding similar to a bum roll at the back of the head. This roll is stuffed with some light but bulky material, for example, wool tow. The roll serves to keep the veil in place because it was totally improper for a married woman to show her hair, especially in conservative 16th-century Poland. This padding could be rather small or very big (a woman’s head sometimes looked like an alien’s). 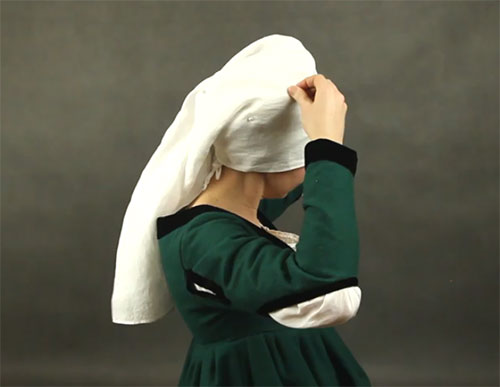 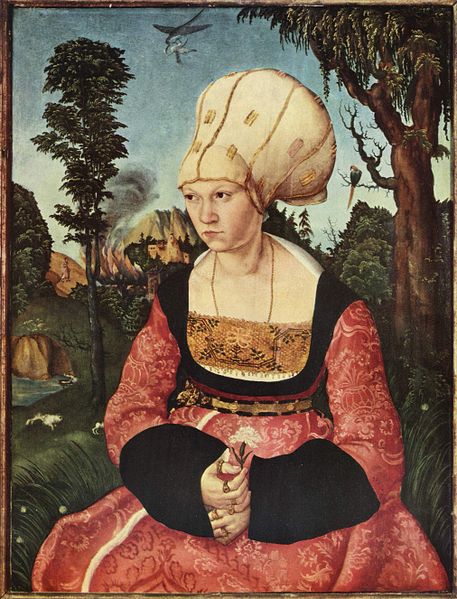 “Portrait of Anna Cuspinian” by Lucas Cranach the Elder, 1502

There is another dress underneath, thinner, sleeveless, and with a low neckline so that it wouldn’t peek from under the main gown. This underdress is also laced at the front because we’re talking about the outfit of a middle-class woman who didn’t have maids and dressed by herself. It is open at the front and is easily shrugged off as well. 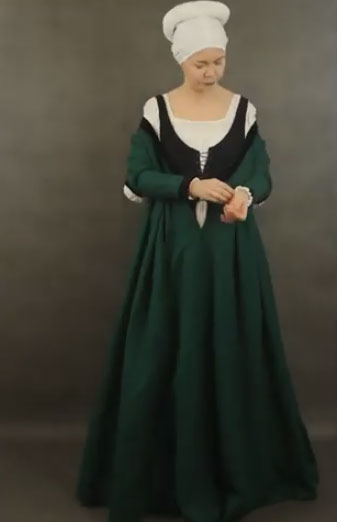 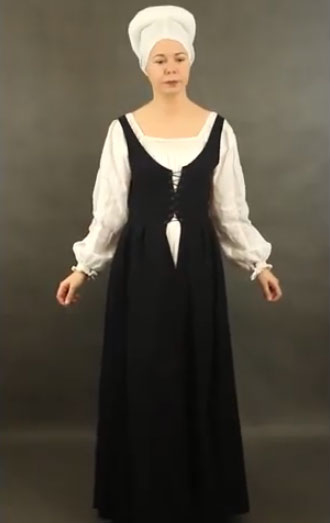 Under this dress, there is a loose linen chemise. It is wide due to the side inserts. Cute waffle pleats on the chest and cuffs are a very fashionable detail. They’re not only pretty but also stretchy. 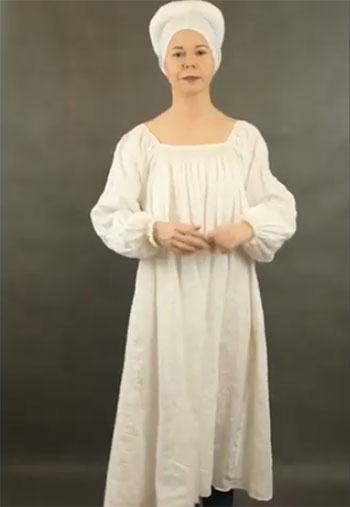 If to talk about footwear, these soft leather shoes are called “poulaine” or “crackowes”. They are from the 15th century and still remain in use in the 16th century. They are worn over woolen stockings with garters. 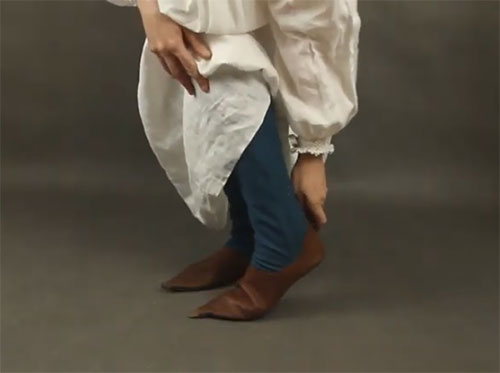 That’s it. These are all pieces of clothing worn by the wives and daughters of handicraftsmen in 16th-century Poland. 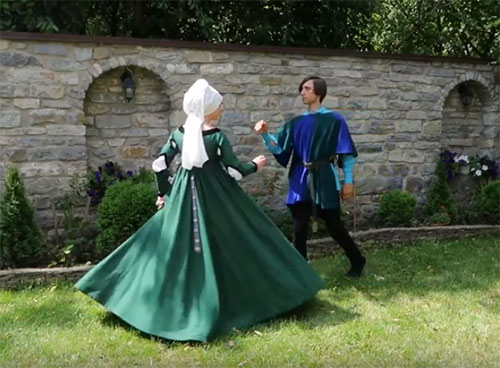