Many Czech folk costumes look rather bizarre, especially women’s outfits with their baroque exaggerated shapes – puffed sleeves, short and very wide skirts, giant ruff collars, large headdresses, etc. But in the Moravia region, the traditional dress often appears more natural and usual to our eye. Both male and female attire are still charming, unique, and elegant; they reflect the local culture and lifestyle. And, of course, the folk costume varies from district to district or even from village to village, which is so typical for Slavic countries.

The traditional attire in this region of Czechia typically indicated the occupation of a person. There were a lot of farmers and hard-working people in this area, so the traditional costume was much simpler than in some other regions of Czechia. The locals preferred dark-colored clothes made from available fabrics, which were handmade. Garments were modest, adorned with lace and embroidery, and not too bright and tacky. 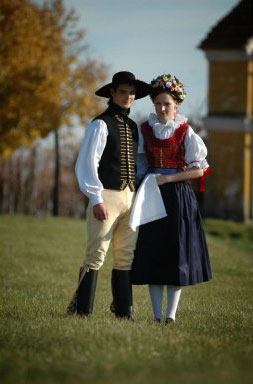 It consisted of a white shirt with wide sleeves, knee-length leather trousers called “koženky”, a vest with a row of buttons called “kordula”, a wide-brimmed black hat called “klobouk”, blue stockings, high leather boots called “holínky”, and a handkerchief put in a pocket.

The shirt was snow-white, made from linen, and embellished with lace at the collar and cuffs.

The breeches were made from leather and typically were yellow.

The vest looks really elegant, with a long row of buttons and cute yellow or black embroidery. Sometimes, it had a black stand-up collar called “flór”.

In winter, Moravian men wore white wool coats. Sometimes, a dark cloth coat was used on top of it.

It consisted of a white linen blouse with a large ruff collar, a long skirt called “oplicko”, an apron, a decorative bodice called “kordulka”, a headdress, white stockings, and shoes.

The blouse typically had short puffed sleeves, gathered, tied with a red ribbon, and embellished with white lace. The collar was a wide ruff called “tacle”, lined with lace and/or embroidery.

The bodice was waist-length and ornate – adorned with embroidery, ribbons, and braiding. It often was bright, for instance, red.

The skirt was below-the-knee length, often pleated and ruched. It was covered with a simple dark apron.

The headdress differed according to the marital status and region of origin. Young unmarried girls wore flower wreaths; married women wore kerchiefs or other headwear.

This outfit is from one of the Moravian districts. Other areas have a variety of traditional costumes, some are similar to this one, others are a lot different.

#1 Czechoslovak Folklorist 2021-10-22 12:53
As with the other two pages the author has published here this text is inaccurate and sometimes laughably wrong. The most laughable statement is:

But in the Moravia region, the traditional dress often appears more natural and usual to our eye.

Well, if you actually are well versed in folk costumes from this region, you would know that Moravia is the exact region that the author criticizes for being bizarre. The one picture provided is NOT in any way representative for Moravia. For example look at kroj from Kobylí or the Moravian microregion of Hanácko.
Quote
Refresh comments list