The headwear called “bash” or “bash orau” was the traditional Uzbek piece of clothing that occurred only in one particular region of Uzbekistan. And this unique turban could tell a lot about its owner – her approximate age, financial status, region and area of origin, etc. But also, it had some strictly practical functions. All this makes the bash turban a very interesting and original Uzbek headdress.

The bash orau is a kind of turban used in Surxondaryo region of Uzbekistan (the very southern region of the country). It occurs only in this particular area.

This headdress traditionally consisted of several shawls or kerchiefs wound around the top of the head so that they formed a tall cap. These kerchiefs could be different but mostly either colorful industrially-made calico kerchiefs or plain white. Wealthy women sometimes used expensive silk kerchiefs. Younger women wore multicolored shawls, while ladies after 40-45 years old often stick to white kerchiefs. Usually, a woman switched her colorful shawls for white ones after her oldest son got married. She was considered a wise elderly lady then, soon to become a grandmother, so her headgear had to be more modest.

The bash orau was formed over a takya skull-cap that sat tightly on the top of the head – most turbans around the planet are wound around similar caps because hair is too smooth and the turban would slide down without a basic cap. A skull-cap helps keep the turban in place and create the proper round shape. Over the bash, Uzbek females could wear a veil – white or colorful – that would reach below the waist. 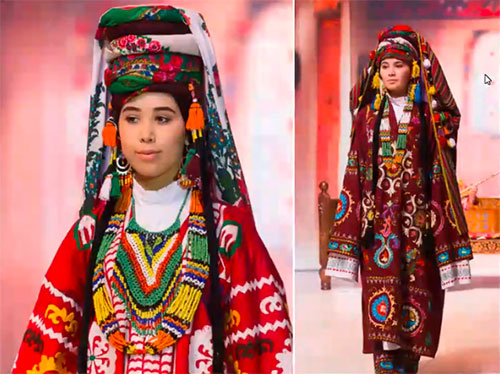 Bash orau turbans in Uzbekistan. Photo from the lecture of Yulduz Gaybullaeva on Uzbek women's clothes

The bash orau turban was typically tall – sometimes so tall that it doubled the size of the head height-wise. The size of this Uzbek turban depended on several factors. First of all, the age of the wearer. Younger females wore fewer kerchiefs, typically red or very colorful, and the headpiece remained comparatively short. Middle-aged women wore taller bash orau made from multiple shawls, often with a veil on top. And elderly ladies preferred pure white tall bashes.

Another factor was the financial capability of a woman. The taller her bash, the richer she was. People even said “rich bash” and “poor bash” to indicate how costly the headpiece and how rich the person was. Also, wealthier ladies added silk shawls to the pile. So, you could see how wealthy the wearer was by her bash orau.

By the way the shawls were tied around the head, one could say where exactly in Surxondaryo region the woman was from. There are different methods of draping the bash. 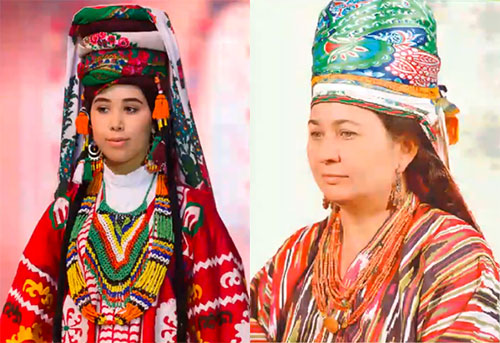 Compare these two different styles of Uzbek bash orau. Pictures from the lecture of Yulduz Gaybullaeva

Another curious thing about Uzbek bash orau turban is that this headpiece was not just decorative headwear that women competed in piling higher and higher. The bash protected the head (and sometimes the ears and neck) from wind and cold weather. Women carried small useful items between the layers – pins, needles, threads, etc. And probably all that fabric could be used whenever needed. Remember, we’ve had an article about Kyrgyz elechek headdress – a similar turban but wound from meters of fabric? Women used that fabric for bandages, diapers for babies, etc.