Kyrgyz folk headpieces are remarkable accessories. There are 3 main types of female headgear: a tebetei (fur hat), a topu (skull-cap), and an elechek or kalyak (long piece of cloth wound around the head like a turban). Let’s look in detail at these traditional Kyrgyz headwear items worn by women. Particularly, we’ll learn a lot about the elechek – this folk female headdress is perhaps the most charming and useful article of clothing in Kyrgyzstan and it reflects the local cultural peculiarities perfectly.

Kyrgyz headpieces are magnificent accessories. They look ornate and unique. The local materials are cotton, fur, leather, velvet, etc, which are often used to make headdresses. Also, these pieces are usually decorated with embroidery, beading, applique, fur trimming, and various other embellishments. The ornamentation is typical for the local culture and beliefs. There are even embroidery patterns and symbols used only on headgear and never applied to other pieces of clothing. So, let’s look in detail at the main traditional Kyrgyz headwear items worn by women.

This hat looks festive and ornate because it’s trimmed with fur and adorned with feathers at the top. This headwear was often used in winter because it was made from fur and very warm. The crown of tebetei was usually made from felt, leather, velvet, and other fabrics. This headdress is traditional for unmarried girls. For instance, little Kyrgyz girls (under 12-14 years old) wore their hair plaited in 40 braids with a tebetei on top. Older unmarried girls could make 2 braids and wear a tebetei just the same. 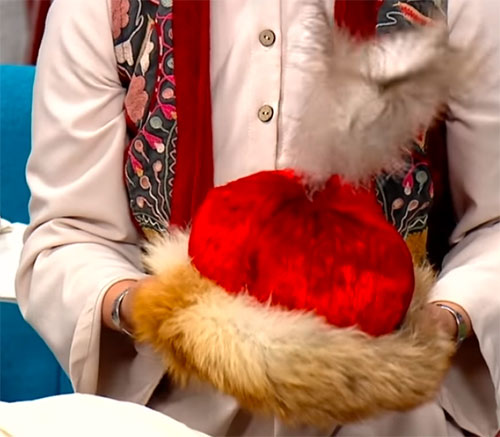 Small Kyrgyz girls sometimes wore topu. It is a little skull-cap, often made from felt. The topu is worn on the top of the head. Among other things, this headwear protects the head from the hot Central Asian sun and prevents sunstrokes.

When a Kyrgyz girl got married, her headgear changed. First of all, they always wore their hair braided in 2 braids, which means that she’s not alone anymore, there are two of them together now. On top, married women traditionally wore a variation of a headdress called “elechek” or “kalyak” (regional name for southern Kyrgyzstan).

In southern Kyrgyzstan, under the elechek, was worn an ornate cap or sort of a coif that kept the hair in place. It is a bit similar by the shape to a modern ski hat. It has longish front flaps with adornments (metal elements, corals beads, or other beads) that hang down. The hat is also decorated with embroidery, sequins, beading, etc. At the back, it has a braid cover, long and ornate flap that is put over the braids. 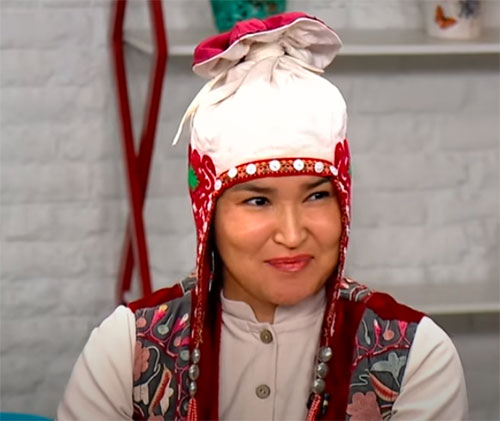 Special coif worn under the elechek in southern Kyrgyzstan

On top of it, was put the elechek – a large matriarch’s headdress that, basically, is a long (from about 13 to 40 m) piece of white cloth wound around the head. The length of the cloth depends on the status, age, and wealth of a woman. This headwear is large and intricately wound. Often, it is not one piece of cloth but several shorter pieces laid layer after layer. The decorative part of a coif peeks from under the elechek and adds the elegance and festiveness to the whole headpiece. 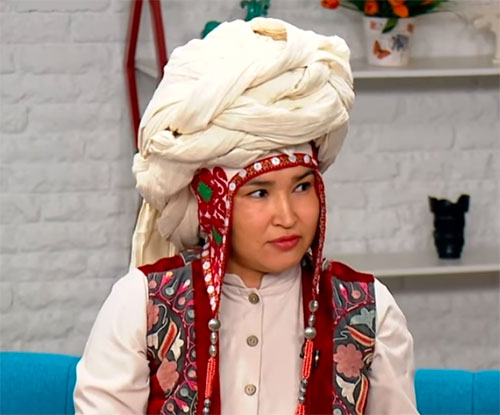 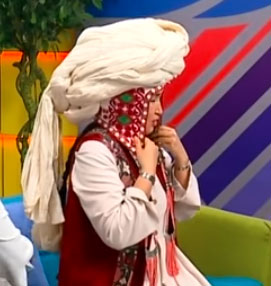 By the way, right now, there were 14 different styles of elechek: 7 northern and 7 southern designs. But these are those known to scientists at this moment. There are 40 Kyrgyz tribes, so it’s very likely that there were more but they didn’t survive till the modern day. 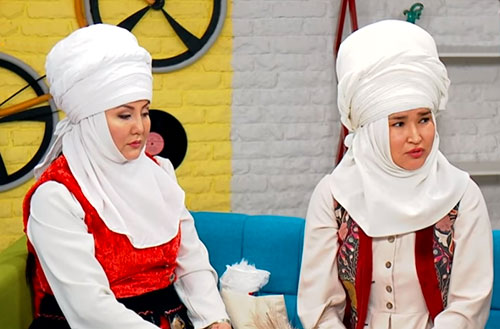 What’s so special about the elechek? This headdress is very curious because it’s very functional. Here are just a few situations when it becomes kind of a first aid kit. Kyrgyz people originally preferred a nomadic lifestyle, they moved from one place to another all of the time. And they took all of their belongings with them. The matriarch always had up to 40 meters of spare fabric on her head, which she could cut off and use. When someone got injured, women made bandages from their elechek. When babies were born en route, elechek could be cut into diapers. Even when someone died, people could use elechek as the burial shroud. Though usually, elechek became the woman’s own burial shroud, and it was the last function of this headwear.

Fun fact! Kyrgyz women often hid their jewelry during their trips and migrations inside of the elechek. And if enemies, especially foreigners, attacked, they couldn’t find treasures in bags and chests because all of the most valuable pieces could be hidden in the women’s headgear. As elecheks were large, they were a perfect hiding place.

Of course, such a mass of fabric draped in a certain specific way demands a lot of time and skill to wear. Mostly, women needed help to put on the elechek. They wound it around each other’s heads to do everything perfectly and tightly. So, Kyrgyz women didn’t take off this headdress each evening, they wore it for several days or even weeks and then took off and washed. 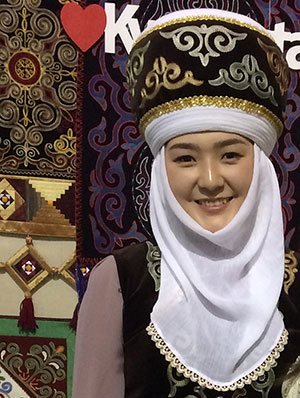 People from different local ethnic groups, tribes, or communities, when met, could determine the region of origin and status of a person (and the whole family, accordingly) by the woman’s elechek.

This folk female headdress is perhaps the most impressive and useful article of clothing in Kyrgyzstan and it reflects the local cultural peculiarities perfectly.