The craft of embroidery is widespread throughout the planet. Practically every ethnic group traditionally uses needlework to embellish clothing, household items, various accessories, and other objects. But every culture has its own peculiarities, embroidery patterns, stitches, needlework techniques, compositions and combinations of embroidery on cloth, etc. And Kazakh people are no exception. Let’s take a closer look at the craft of embroidery in Kazakhstan and find out which patterns were typical, what materials were used, and what’s so special about Kazakh folk embroidery.

In this country, women are artisans who practice needlework and they are very skillful. There were originally more than 10 embroidery techniques typical for Kazakh culture. Women used a needle or crochet. And they spent a lot of time working at their embroidery, improving their skill. Every

Kazakh girl learned to embroider when she was a kid – it was a part of traditional upbringing for women.

One of the characteristic features of Kazakh embroidery is bright, vibrant colors. 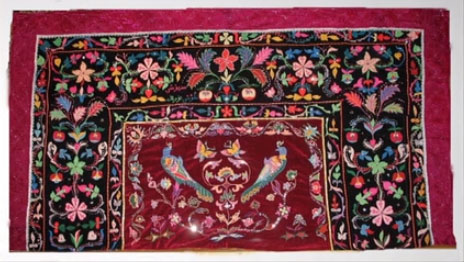 As with most authentic embroidery patterns around the world, there is a deep meaning and symbolism behind every design, every choice of color, every stitch. In the past, any piece of clothing adorned with needlework was like an open book – people understood what the patterns said. So, the costumes and different household items were not only works of art but also means to pass the knowledge or information to other people.

Among the favorite and most popular patterns in Kazakh needlework were solar symbols. The locals believed that the sun has a protection function, invigorating, and grants fertility. Along with the sun, we can see the moon and stars. Also, floral designs were widespread. Though, of course, every region of Kazakhstan had its own traditional patterns, typical color combinations, composition, and so on.

The most expensive embroideries were made with silk threads, gold and silver threads, seed beads, coral beads, etc. They looked opulent and costly. Usually, such clothes, carpets, and household items were sold to wealthy families. By the way, Kazakh embroidered carpets (yes, we are used to woven carpets but Kazakh people made embroidered carpets) could be extremely beautiful and pricey – for instance, those with rich embroidery on black or red velvet. 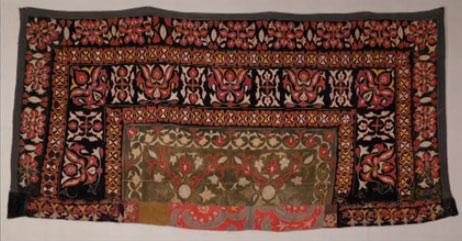 In the past, the craft of embroidering in Kazakhstan was one of the means to earn a living. There were even craft shops organized in the 19th century where young boys were taught to make jewelry, work with wood and leather, while girls were taught to embroider. It was not just a hobby but a profession that could feed the family.

One of the curious examples of Kazakh embroidered household items, typical for this culture but so odd for outsiders, is the bridal saddlecloth. It was used during the wedding ceremony because horses are a very important part of Kazakh culture. Such saddlecloths could be large and exclusive, beautiful pieces. They were most often made of wool and densely embellished with embroidery. 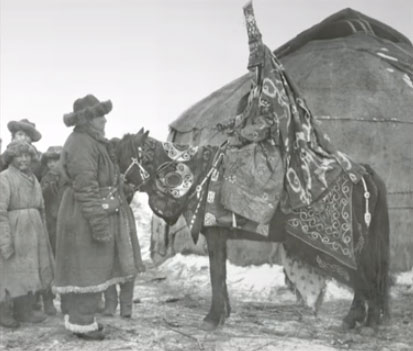 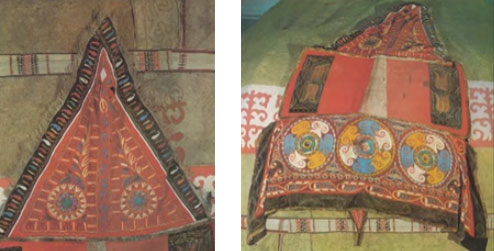 Kazakh bride in her wedding outfit. You can also see an embroidered saddlecloth

Unfortunately, a lot of these Kazakh vintage clothing articles and household items are lost to the history now because, during the Russian Revolution of 1917, wealthier people were repressed or fled Kazakhstan and lost or sold their family valuables. So, hundreds or even thousands of authentic pieces disappeared and were destroyed. Still, there are some samples preserved in museums and old photos that depict traditional clothing and accessories, so we can see beautiful examples of Kazakh folk embroidery.