Mongolian clothing traditions are very ancient, diverse (because every ethnic group has its own peculiarities), and closely connected with the local lifestyle and climate. The traditional costume of Mongolia is unique and original. You won’t confuse it with any other folk dress. There are, of course, a lot of variations of the national attire according to the region of the country. The greatest diversity is in the shape of a headdress. Some hats are so elaborate and odd that they can easily impress and surprise just about anyone.

Both male and female traditional outfits consist of a large overcoat called “deel”, a belt, an intricate headdress, boots, and some accessories. Under the coat, people use ordinary shirts, trousers, skirts, and dresses. But Mongolians always wear their coats, even in summer – though, summer deels are lighter. People need this part of their costume to cope with the weather conditions: severe winds, the dry cold, frequent storms, and comparatively cool summer.

Before the 13th century, Mongolian traditional clothes were simple and plain. Usually, they were made from leather and wool. But since the 13th century, the folk costume of Mongolia became ornate and brighter. People started to use silk fabric to make certain garments and decorate other pieces of clothing. 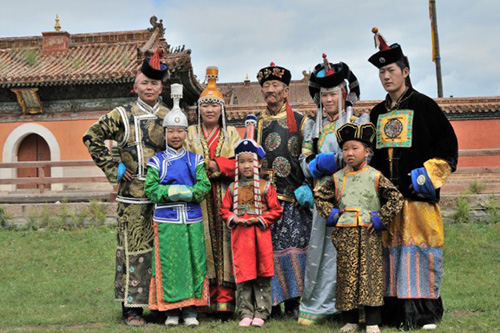 Mongolian men, women, and children in the traditional clothing. Photo from Mongolia-trips.com

Nowadays, local people in Mongolia, especially in big cities, often use the western-style clothes instead of the folk costumes. But people in the rural areas still wear deels in everyday life and on holidays and special occasions. Elderly people also prefer the traditional garments to modern clothing.

The deel is the most world-famous and popular in Mongolia garment. The festive deel can be very ornate, expensive, and beautiful. It is made from cotton, wool, silk, or brocade. Summer deels are lighter and less warm, the insides of winter deels are often covered with sheepskin or goatskin. Traditionally, the color of the coat is blue, burgundy, or olive but today any color is fine. The coat for everyday usage is usually dark-colored (brown, gray, black, etc.). Male deels are simpler, looser, with fewer decorations and plainer colors. Women’s deels can be rather tight-fitting, very colorful, embellished with multicolor ribbons, patterns on the fabric, and various decorative elements.

The deel has a specific cut that distinguishes it from other coats used around the world. It is usually calf-length or ankle-length. It has long sleeves. But the most peculiar part of the garment is its front. While ordinary coats are buttoned together in the middle, the deel has two wide flaps: the right flap is kept close to the chest with the left one covering. So, the fasteners are situated not in the middle of the chest but below the right armpit, on the right shoulder, and on the neck. Usually, there are 5-6 buttons. One more interesting feature of a deel: the area between the flaps and above the belt is used as a large pocket. Men and women carry different useful knickknacks in such pockets. 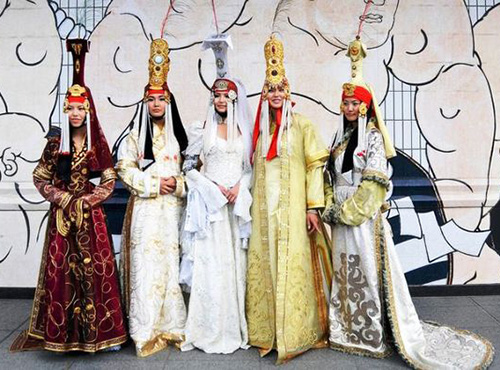 The sleeves of the deel are interesting. They are wide and cup-shaped; locals lovingly call them “hooves”. There is a legend that such sleeves were invented for Mongolians to have something in common with their horses. We should mention here that Mongolians are traditionally a nomadic community, so their horses and cattle used to be the most valued and important thing in their possession. Some ethnic groups in this country still live by the ancient rules established by their ancestors – they are living a nomadic lifestyle.

The patterns on the fabric of a deel are traditionally symbolic. People used to know the meaning of every symbol, they often chose the patterns themselves. Traditional Mongolian geometric designs were popular. Today, some of the knowledge is lost or remembered only by the few.

There is a shorter traditional jacket worn by Mongols; it is similar to the deel by the cut. It is called “khantaaz”. This garment is often made from silk. It is worn over the deel.

The deel is usually belted. Earlier, large sashes made from silk were used. The long sash was winded around person’s waist several times. The length of the fabric belt was 3-5 meters for men and 2-4 meters for women. Curious fact: odd number of meters is used for male sashes and even number for female fabric belts. The most popular colors of a sash are yellow, orange, and green. While fabric belts were used for everyday clothing, leather belts complemented the festive outfits. Modern Mongolians prefer leather belts with big and ornate buckles. In Mongolian folk costume, the belt is also used as a holder of useful things (tobacco and pipe pouch, tinder pouch, eating set, snuff bottle, etc.). The eating set is another interesting piece of Mongolian culture. It consists of a knife, a pair of chopsticks, sometimes there are also a toothpick, a tweezer, and an ear scratcher. Mongolian eating set is a useful item because, being a nomadic nation, people are often in the wild (far from any civilization) during long periods. Such eating sets were used by poor and wealthy people, that’s why they often were ornate and beautiful – made from precious metals and adorned with semi-precious stones.

Mongolian traditional shoes are the object of pride for these people. Mongols use high leather boots with upturned toes in the warm season and large felt boots in winter. The felt boots are warm and have non-slip soles. The traditional boots are made from very thick 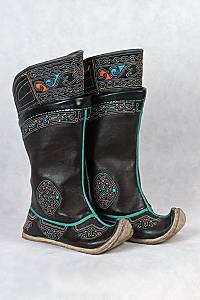 and unbending leather. The tops of the boots are beautifully decorated with leather applique and colorful patterns. They don’t have any zippers or laces. When the weather is cold, Mongols use thick felt socks with the leather boots. There is an interesting feature about the boots: some of them have a special device that enables the boot to come off if the foot becomes stuck in the stirrup. As Mongolians are traditionally horse riders, this ability of the shoes is very useful. If to talk about the reasons for Mongols to make boots with upturned toes, there are several of them, though no one knows which one is the right one. The most logical are: the tip of the boot prevents it to slip from the stirrup during riding; the leather is so thick and rigid that it would be too hard to walk if the sole was flat; this shape of boots was invented around the time when Buddhism was introduced to Mongolia, so the traditional shoes were made according to the customs of Buddhists.

One of the main parts of Mongolian folk costume is a hat. Traditionally, locals seldom walked bareheaded. Mostly, it can be explained by the harsh weather conditions, but it is also a custom to wear a headgear. There is a great variety of Mongolian traditional headdresses – at least 400 different shapes. Not only the diversity of hats illustrates the regional variety, but special headgears were made for the summer/winter, young/old people, men/women, married/single females, holidays/ceremonies/ordinary days, etc. 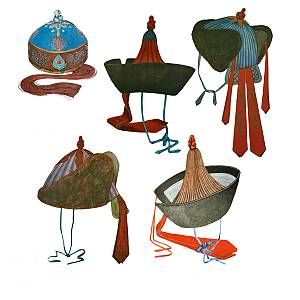 The headdress can tell a lot about a Mongol. The shape, color, materials, decorations – everything counts. The hats and caps worn in summer are usually made from velvet, silk, and brocade; winter hats are made from wool and trimmed and covered with fur. The most popular shapes of a headgear are cone-shaped hats, flat-topped caps, hats with ear flaps, and round domed hats with a pointed peak. The headdresses are often decorated with precious and semi-precious stones, embroidery, colorful ribbons, beading, metal elements, knotted cord, silk inserts, and other embellishments.

Modern Mongolian women wear jewelry with the folk costume. In the beginning of the 20th century, women preferred to decorate their deels with jewels and wear jewelry made from precious metals and semi-precious stones (pearls, coral, and jade). But after the communist revolution in Mongolia, ornate clothing embellished with jewels became outlawed. It symbolized richness and class inequality, so communists banned such outfits. People started to wear simpler costumes, unique headdresses became rare, men cut their ponytail (Mongolian traditional haircut), and women cut their hair for the first time (they always wore long hair before that). 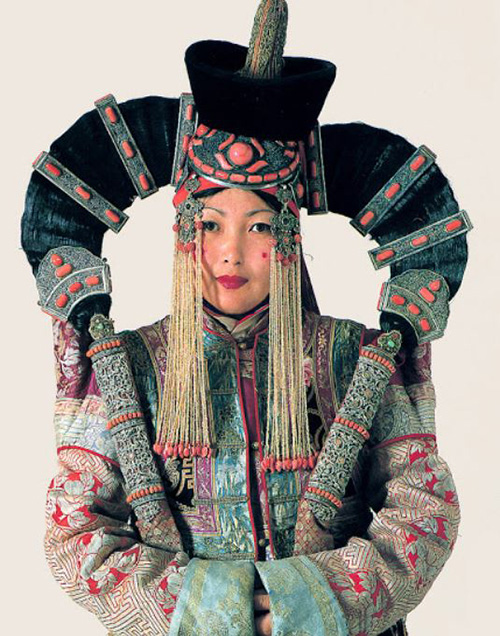 Mongolian woman in the folk costume with a very extraordinary headdress (this shape of a female headgear is typical for the Central Mongolia). Photo from Ethnicjewelsmagazine.com