Batik from Java island. The craft of making Indonesian batik

Indonesians widely use a batik cloth made by a special technique of wax-resist dyeing. During the dye process, the waxed areas resist the dye, and when the wax is removed, a pattern emerges. The process is time-consuming and requires some skill and imagination. But a lot of Indonesian and, in particular, Javanese artisans are engaged in this craft. We’d like to offer you some pretty much detailed info about how to make batik and what peculiarities there are in this process.

What is the batik?

Both the technique and the textiles produced are called “batik”. The word “batik” may derive from the Javanese words “to write” and “dots”. Nowhere in the world is this method of patterning textiles as highly refined as in Indonesia. 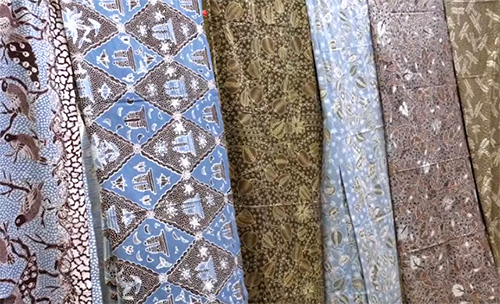 Batik tells a story like no other textiles about the history of an island people and their beliefs. From early influences of Hinduism and Islamic trade to a demand for the brightly colored florals highly prized by Europeans, batik has made its way from the Sultan's palace in Yogyakarta to village communities across Java, where highly skilled artisans produce batik for a range of buyers and tastes.

How is it made?

For centuries, Javanese batik has been made the same way: by drawing or stamping wax on a cloth and then dyeing the cloth, once or repeatedly, holding and releasing areas of color with wax, until it is finally boiled out – thus revealing the skill and effort of the makers of the cloth.

Basically, there are two main methods of making Indonesian batik: one – using a small tool called a “canting” to draw patterns, the other – using metal stamps to apply the wax. Stamps produce textiles faster for both export and domestic demand. This way, batik can be made at a lower cost, and finished garments are more affordable. 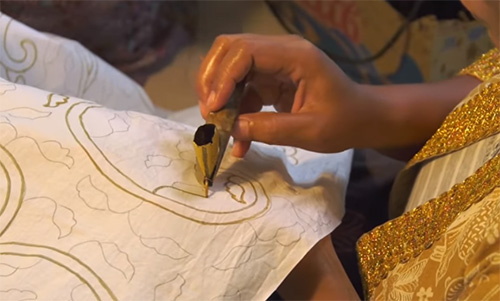 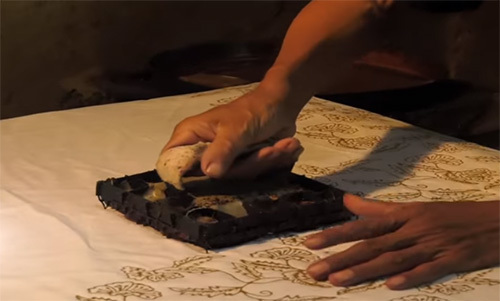 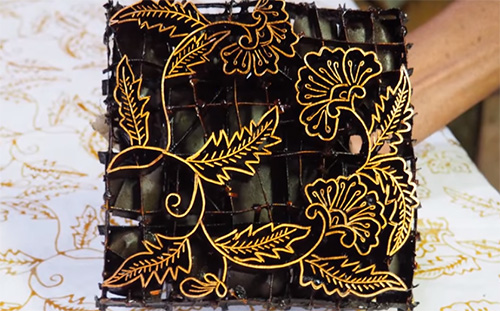 Let us look at the process of batik by visiting a collective of artisans in the village of Kebon in Central Java. The first step in making batik is to apply the design. The design is first drawn on paper and then transferred using a pencil, or non-permanent ink, to fine white cotton cloth. The design may be a centuries-old traditional pattern, or, as in the case here, it may reflect the contemporary aesthetics of the artisans. After the pattern is transferred, the cloth is ready for the first layer of wax.

What to know about batik wax?

Batik wax is a combination of paraffin, beeswax, and resin. It is a translucent yellow when it is fresh, but may look dark brown or black after many reuses. The artisan retraces the design on the cloth with wax using the canting. Some areas are then filled in with decorative detail, known as isen-isen. A skilled batik artisan will know hundreds of isen-isen. The artist applies the wax with steadiness; years of practice that often began as a child allows her to work quickly, with fluidity and accuracy. 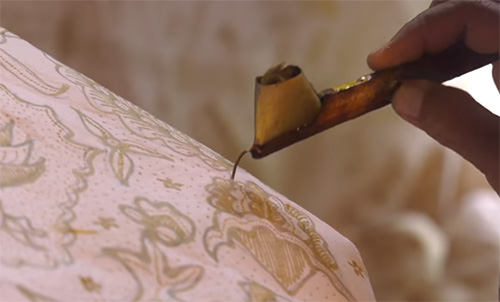 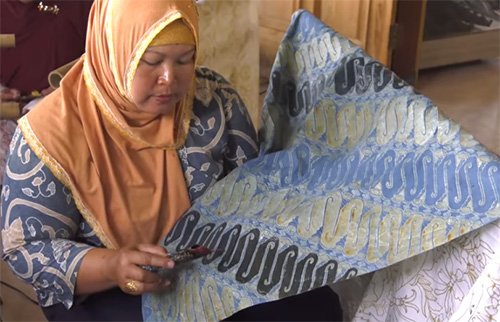 The most refined and expensive batik is produced by hand. Patterns are drawn using a canting or wax stylus, a method called “batik tulis” or “written batik”. The stylus consists of a bamboo or wood stick with a small spouted copper reservoir for wax at the end. The artist dips the cup into a pot of hot wax, blows on it to assure smooth application through the spout, and then applies the wax, drawing patterns with the spout. After both sides of a cloth have been waxed, it is ready to be dyed. For a complex pattern with many colors, the cloth is waxed and dyed many times.

Dye bath. What are natural dyes made of?

Batik makers often use imported synthetic dye. However, in Java, more and more artisans are returning to traditional methods, by producing batik with natural dyes from plants that grow abundantly in the wet tropical soil.

Once the wax has been applied to the entire cloth, it is ready for its first immersion in a dye bath. Many communities in Indonesia use imported synthetic dyes; however, there is a growing trend to use natural dyes, as we find in this collective of artisans in Kebon. Traditionally, the ability to make dyes was extremely important in textile-producing communities, and villages would be known for the quality of dyes produced.

Some frequently used colors are derived from indigo leaves, jelawe fruit, mahogany wood, teger wood, tinggi bark, and mango leaves. The dye is heated in outdoor pots. Nothing goes to waste in the countryside where wood an ash waste from the fire, will feed hungry chickens.

The dye is transferred to a basin where the artisan ensures the cloth is immersed. After the first dye bath, the cloth is dried in the sun. Then, certain areas are covered with wax, to preserve the first color, before the cloth is dipped into a second color.

The artisan is familiar with the finished design and knows where to apply the wax. Fine cantings are used to draw lines to contain the colorful design. Cantings with larger spouts will be used to “hold” large areas of color that will be preserved during subsequent dye baths.

How is wax removed?

This process of applying wax to the cloth, dyeing, adding more wax, and further dyeing and drawing will be repeated several, if not dozens of times, depending on the pattern and number of finished colors in the batik cloth. Between waxings, the textile is sometimes immersed in boiling water to remove wax, and then rewaxed to protect different parts of the pattern from subsequent dyeing.

Once the dyeing and waxing are completed, the cloth is ready for final wax removal. The textiles are taken to a neighboring house where large pots of water are set up for wax removal. The wax will be collected for reuse by boiling it out in several pots from very hot to cooler water. The reclaiming of the wax is part of the sustainable practice in this community, where the recycled wax is used again. Finally, the cloth is wrung out and returned to the village, where it is hung to dry the last time.

How Indonesians use batik?

Finished batik cloths can be used for many purposes. They are worn as sarongs and made into clothing and accessories for both local uses and export. Today, contemporary fashion designers are also incorporating batik into their designs. Batik remains an important element of costume for dance performances and for a ceremonial dress in many parts of Indonesia and neighboring countries. 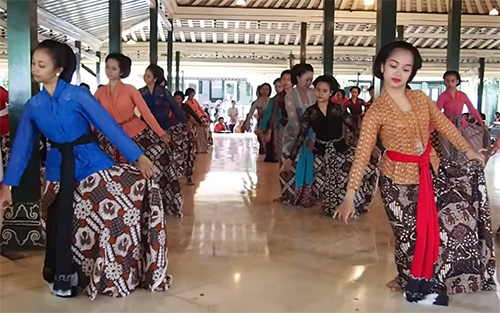 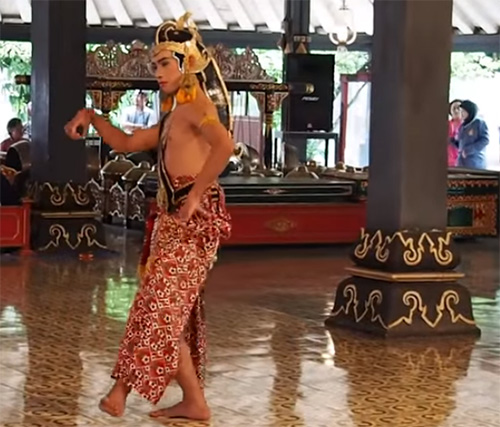 Various artisans have their own vision of how a batik should look like. They use different patterns and symbols, apply different meaning into their designs of batik, and have different philosophy connected to the art of batik.

Artisans such as Abdul Syukur celebrate their Arabic roots and their dotted batik work, thus embracing early traditional patterns in symbolism, once reserved for the Sultan's court.

Others, such as Nuri Hidayati, combine their love for batik and Japanese shibori tie and dye, by crafting Asian-inspired fabrics and wearable art that boasts soft colors and patterns appealing to contemporary tastes.

Collectives such as a group of artisans at Kebon Indah in Central Java are making naturally dyed batik with designs inspired by local plants and historical sites.

While installation artists Ismoyo and Nia collaborate to produce batik exhibitions, exploring the translucence of wax and the language of stitch in a spiritual way. 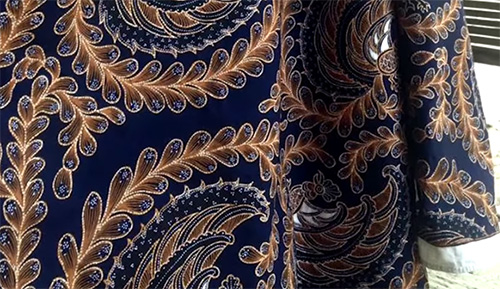 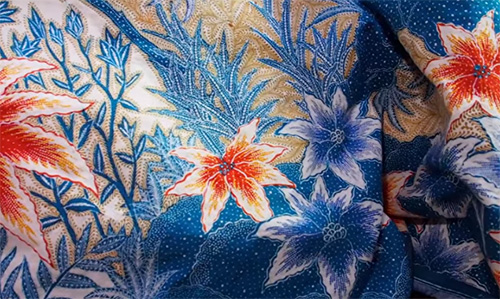