How to make business on handicraft. Tibetan-style embroidery

Why are many folk crafts dying these days? One of the reasons is that handmade products are more expensive than factory-made, mass-produced things, so people tend to buy cheaper clothes and décor. But handmade products are unique and certainly much more interesting than manufactured ones. That’s why lots of people around the world make a business on handicrafts. In Tibet, there is a company that specializes in Tibetan traditional embroidery and is very profitable. It earns about $163,000 per year.

There are many different embroidery skills in China. One of the most celebrated is the Tibetan style which is characterized by its strong religious connotations. The women from Guinan County of northwest China’s Qinghai Province have taken advantage of their embroidery talent to improve their quality of life.

Guinan County is just one of the mostly Tibetan inhabited areas in northwest China. Here, many traditions have survived. The Tibetan-style embroidery is one of them. For more than 10 centuries, these embroidery skills have been passed down from mother to daughter. What was once considered a woman's job, has in recent years seen more man dedicate their time to learning this ancient craft. 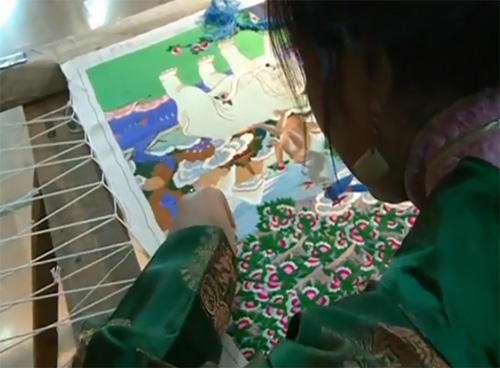 This workshop belongs to a Tibetan company that specializes in Tibetan embroidery. It currently employs over 400 Tibetan women in Guinan and two nearby counties to create the embroidery works of this quality.

46-year-old Dolmaja is the brains behind this booming industry. Born in a small village in Guinan, he grew up watching his mother embroider. Her expressive works were used to decorate their home and presented Buddhist monasteries as offerings during prayer. 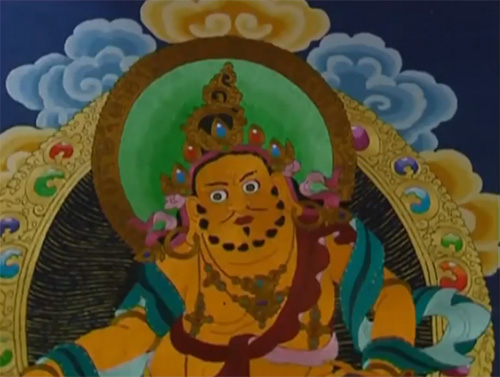 Situated on the edge of the Qinghai Tibet plateau, Guinan was one of the poorest regions in Qinghai Province. Due to its harsh natural environment, it is hard for locals to earn a decent living, to support their families through farming and herding. Like many of his peers, Dolmaja had originally left home hoping to earn a living elsewhere. In 2008, he decided to quit his job, running a successful carpet business in Lhasa, the capital city of the neighboring Tibet Autonomous Region. He then returned home and established his own company, his own embroidery business.

“In the past, embroidery was once popular in all Tibetan inhabited areas. It could be seen in many Buddhist monasteries. But now, Guinan is the only place where the original skills have been preserved”, says Dolmaja, Embroidery business owner. 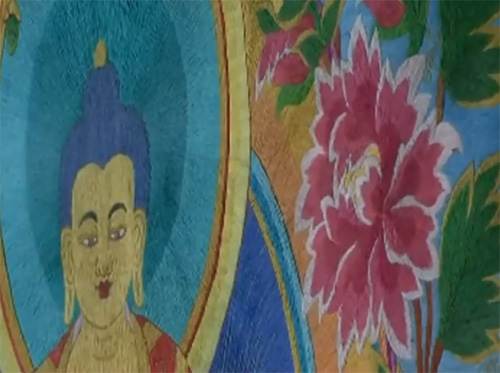 Dolmaja’s previous experience in business makes him confident about a great business potential for the embroidery. He also knows that this industry could present many locals with an opportunity to escape poverty. He hoped that the establishment of the company would prevent the traditional craft from being forgotten.

Tibetan embroidery differs from many other styles of Chinese embroidery in those subject and technique. Like other Tibetan crafts, such as Thangka painting and Buddha sculpture, it usually depicts Buddha’s figures, Sutra stories, and traditional Tibetan totems.

In the beginning, Dolmaja found it hard to recruit skilled workers. Although most Tibetan women in Guinan are able to embroider, the quality of their work varied. Dolmaja also found that some of the traditional stitching techniques had already been lost. He spent months searching for talented embroiderers and then persuaded them to join his company. Once established, together with his team, he worked at reviving dozens of ancient embroidery techniques and renovating hundreds of existing designs. He took inspiration from the 4 most famous styles of Chinese embroidery, which originated from the provinces of Hunan, Jiangsu, Sichuan, and Guangdong. 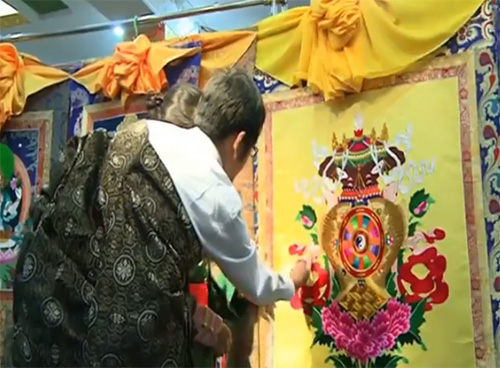 “Based on our research, we realized that Tibetan embroidery could use elements from the 4 major embroidery styles. Now, our products are more diverse but still maintain a very distinctive style”, says Dolmaja, Embroidery business owner.

To promote a unique embroidery work, Dolmaja has traveled around the country, attending business meetings and expositions. Many clients have been enchanted by the beauty of the unique craft and have happily signed supplying contracts with him. The products are now not only sold across the country but also exported to the United States, France, and Japan. His business assets have made the ancient craft a new source of income for local Tibetan families.

“In the past, local artisans didn't know where to sell their embroidery works. My company has helped them enter the market. Now, the demand for our products has exceeded a supply. The artists just need to concentrate on creating beautiful artworks”, adds Dolmaja, Embroidery business owner. 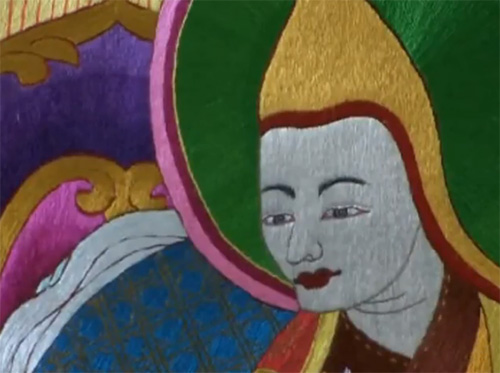 The company is also providing training to local women to make sure that the quality of their work remains at a high level.

“I used to work far away from home. This job is much better. I can go home during lunch breaks to take care of my baby. I make over 2,000 yen every month, which is a lot more than the amount I used to get paid as a migrant worker”, says Tashi Lamo, embroidery worker.

Last year, the company raid in more than 1 million yuan, which is around 163,000 US dollars in profits. Dolmaja is now aiming to expand his company by increasing the number of employees and building more new workshops in nearby villages.

“I have a lot of dreams. First of all, I want to see the Tibetan embroidery inscribed as a National Intangible Cultural Heritage. Secondly, I want to have 1,000 families of poor people and herders shake off poverty. Finally, I hope that my hometown will become known by people around the world as to home of Tibetan embroidery”, explains Dolmaja, Embroidery business owner.