Jamaican folk costumes are very bright, multicolored, organic, and breathy. Traditionally, they were made from locally produced handmade calico fabric. The pattern on the fabric was red&white plaid. An interesting piece of the Jamaican female folk dress is a headgear called “bandana”. It is connected to Asian traditions. Do you want to learn how and why? Read the article below.

Men in Jamaica traditionally wear loose trousers, a shirt, a belt, a hat, and shoes.

In the past, they rolled up their trousers to the calf or knee while working (in the plantation, fishing, etc.). Festive trousers are white.
The shirt is plain and made from natural fabrics, usually cotton. It can be long-sleeved (in this case, men rolled up the sleeves while working) or short-sleeved. Festive shirts are usually white; though, everyday Jamaican shirts are also plain-colored and not too colorful. The red&white plaid pattern is sometimes used for male shirts as well; they are traditionally worn with white trousers.

Leather and fabric belts are used to keep the pants in place. In the past, just a piece of rope could be used in a day-to-day life instead of a belt. 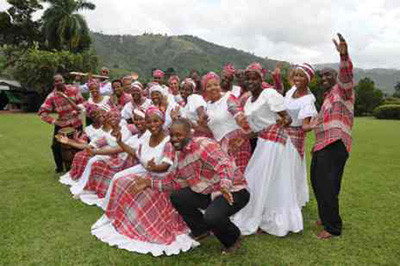 Jamaican men wear wide-brimmed headdresses to complement the national outfit. Usually, these are handmade straw hats made from dried leaves of the Silver Palm top. They are organic, comfy, and provide the much-needed protection from the hot sun.

Male festive clothes traditionally included also a black jacket or a light coat, except for the shirt and pants. The headdress was an obligatory item for special occasions.

National women’s costume of Jamaica consists of a long dress (or a skirt and a blouse), a headband or hat, and shoes. The garments are light, usually made from calico fabric. They cover most of the body, especially the bottom part. The authentic Jamaican women’s costume was calf- or ankle-length, the sleeves could be either long or short, the collar was modest. Locals from some of the islands wore trousers underneath the skirt for extra protection from insects.

Jamaican folk dress is modest and comfy. But the colors are always bright and catchy. The traditional pattern for Jamaica is the red&white plaid pattern; the plaid calico fabric is handmade, produced by the locals, and very often used for the folk clothing. Many different fabrics were used to make the traditional clothes: calico was the most popular cloth, but cotton, denim, drill, burlap, and chambray were also used. 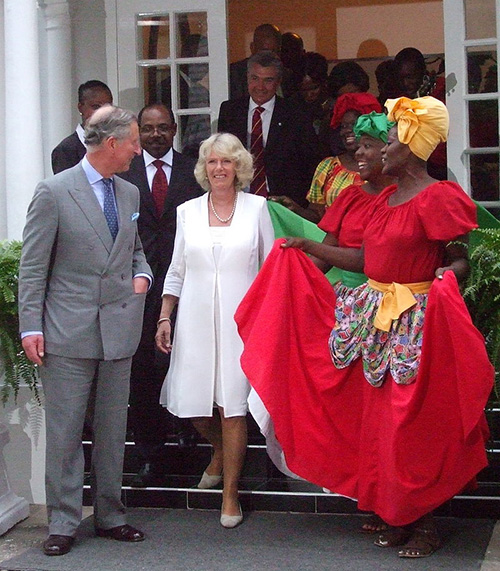 Women in quadrille dresses with Charles, the Prince of Wales, and Camilla, the Duchess of Cornwall. Photo from Wikipedia.org, the photographer is Mattnad

Jamaican folk dress used by dancers, folk musicians, and tour guides (but seldom worn as a national costume) is called “quadrille dress” or “bandana skirt”. It has a long wide skirt, a ruffled blouse, and a matching headband. The most used fabric is cotton or calico. The most popular patterns are red&white plaid, maroon&white plaid, or madras. The traditional plaid cloth, locally produced in Jamaica, is also called “bandana fabric”. The quadrille dress is often worn with a headscarf made from a matching fabric and tied like a turban.

The folk headdresses in Jamaica are either bandanas or handmade straw hats. The hats were traditionally woven from the dried leaves of the Silver Palm top. They provided a much-needed protection from the hot sun. As we’ve said earlier, a bandana is a piece of cloth wrapped around the head. It is meant to keep the hair in place and to protect the head from sunstrokes. But this headgear is not really authentic for Jamaica. Similar headpieces were imported from India in the 18th century. Though, Indian bandanas were made from silk. In Jamaica, people chose cotton and calico to make bandanas. Actually, this info explains why bandana is tied like a turban. 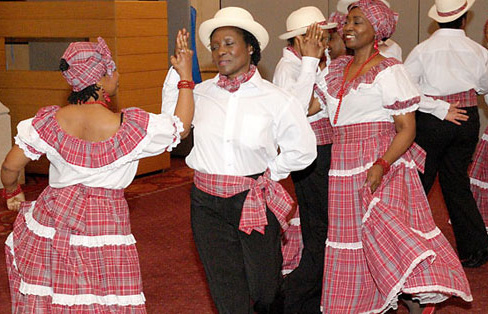 Folk dancers in the traditional costume of Jamaica. Their headdresses are bandanas and straw hats. Photo from Januka.co.uk

In modern times, Rastafarian-influenced clothing has become a part of the Jamaican culture. But we won’t write about it because such garments are not really authentic.