The national costume and traditional crafts are not forgotten in Tunisia even in 21 century. A lot of people still use traditional garments or separate pieces of a folk outfit in day-to-day life. Probably, the main reason for a great popularity of traditional clothing in Tunisia is that such garments were designed considering the weather conditions of this country. They fit perfectly and help locals to cope with the hot sun, sands of the desert and winds (hot and dry from Sahara desert and cool from the Mediterranean Sea). Nevertheless, Tunisians love their traditional costumes and are proud of their national heritage. They usually wear traditional clothing for ceremonies, weddings, religious events and national holidays. 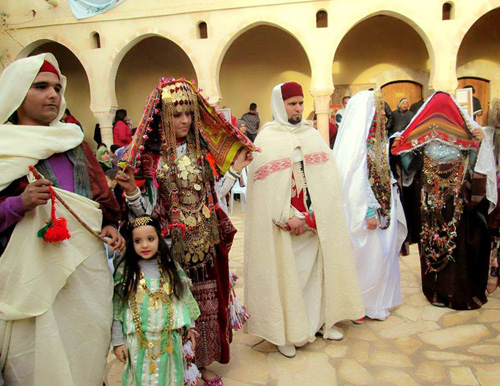 Tunisian men wear simple trousers and shirts in day-to-day life. Sometimes they add a woolen tunic with long sleeves. In winter, they use a heavy wool cloak called "burnoose" (it is a long, loose hooded cloak popular in the Arab World). People in the northern regions of Tunisia wear kachabiya – a garment similar to burnoose, but colored in brown and white stripes. 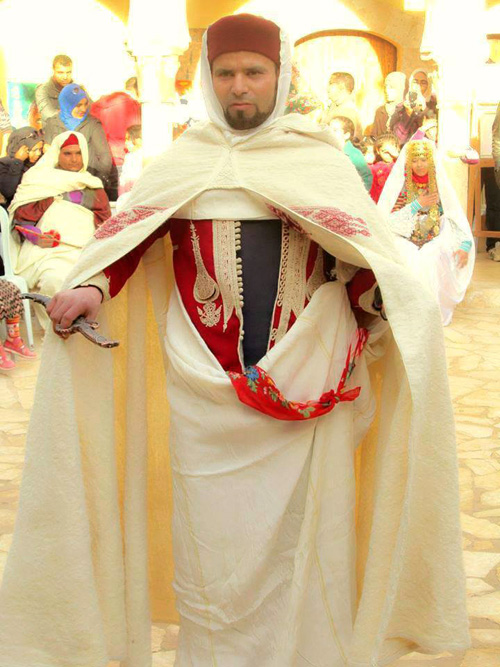 Tunisian man in the traditional costume and with ceremonial knife

The main part of the male ceremonial dress in Tunisia is called "jebba". This garment is always used for special occasions in the rural areas. Jebba is a long sleeveless tunic worn over a shirt, vest (called "farmla") and baggy trousers. It is usually white in summer and gray in winter, but many other colors can be used. Baggy trousers used in Tunisia are called "sarouel". They are always belted (with a silk or other belt) to keep them strictly in place.

In urban areas of Tunisia, the ceremonial dress looks a little bit different. It consists of a jebba, a linen shirt with collar and long sleeves, a sarouel, a wide belt, shoes and a headdress. The jebba is often adorned with some embroidery, but not much (unlike women's clothing). Jebba is made from wool and silk. The sarouel can be embellished with embroidered patterns or decorative pockets at the bottom. The belt is wide, cut from the same material as the sarouel. Leather slippers are used as shoes in Tunisia – such slippers are considered all around the world to be the classical sign of Arab World. These slippers can be pointed or rounded at the tip. They often are nicely decorated and made from natural materials only. The headdress for special occasions and ceremonies is called "chéchia". It is a close-fitting cap made from red felt and decorated with a tuft or tassel (usually black).

Tunisian women have much more variants of traditional clothing than Tunisian men do. Despite the fact that young females often prefer Western-style attire to traditional costumes, a lot of Tunisian women still wear national clothing in day-to-day life. Especially, elder women. Sometimes people use the full set of traditional costume, but mostly they choose only separate pieces (for example, scarves or headdresses). One of the most popular urban garments in Tunisia consists of an embroidered blouse, baggy pants, and a white silk or woolen veil called "sefseri" to cover the head. 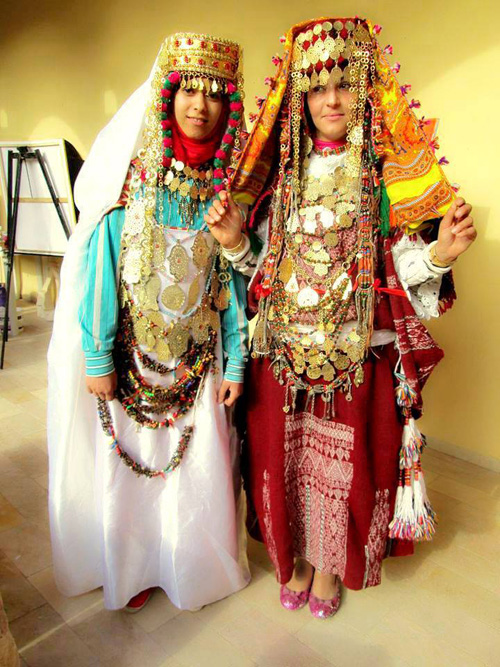 Tunisian women in traditional costumes with plenty of jewelry

Modern women like to combine traditional clothing with modern pieces of the outfit. Such a mixed style is more typical for urban areas, when in rural areas women often use brightly colored dresses in the Berber style. They are made from red or blue cotton. The fabric is opened on the sides and belted at the waist; there are also 2 clasps at the shoulders to keep the dress in place. Such dresses mostly carry the features typical for certain region or village.

One of the typically Tunisian outfits consists of a fouta and a blouza. The fouta is a wrap-around skirt worn from the waist to the ankles. It is made from cotton or silk. The blouza is a top similar to the bustier. The fouta is sometimes replaced by baggy trousers – such attire was traditionally used by brides centuries ago. 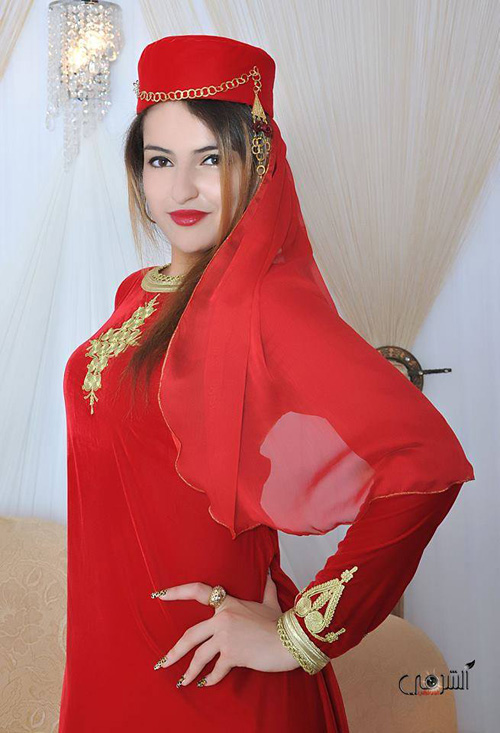 The ceremonial costumes of Tunisian women vary from region to region. It may consist of a dress or a kaftan (traditional overdress worn in many countries since the ancient times), a blouse or a top and a jacket, a skirt or baggy trousers, a scarf or a cap. The main materials that are used to make a formal outfit are silk, velvet, cotton, brocade, and wool. Ceremonial costumes are always embellished with embroidery, gems, precious metals, lace or patterns on fabric. Though, the main feature and the most estimated decoration of ceremonial costumes is embroidery. 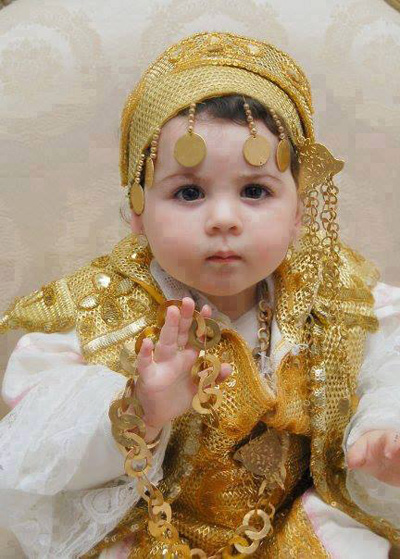 Little girl in festive clothing and with gold jewelry

Tunisian women are fond of jewelry. The traditional festive costume is always embellished with plenty of golden jewelry and decorations. The most popular is jewelry made from gold sovereigns; these coins are used in necklaces, earrings, to adorn the headdress etc. Even little girls are allowed to use many gold adornments. But no one can match Tunisian brides in the amount of jewelry. There is a tradition that the groom presents gold jewelry to his future wife (necklaces, bracelets, rings, trimmings for the sides of the headdress etc.). So, every man tries to buy as many pieces as he can afford. As a result, the upper body of Tunisian brides often is thickly covered in gold. 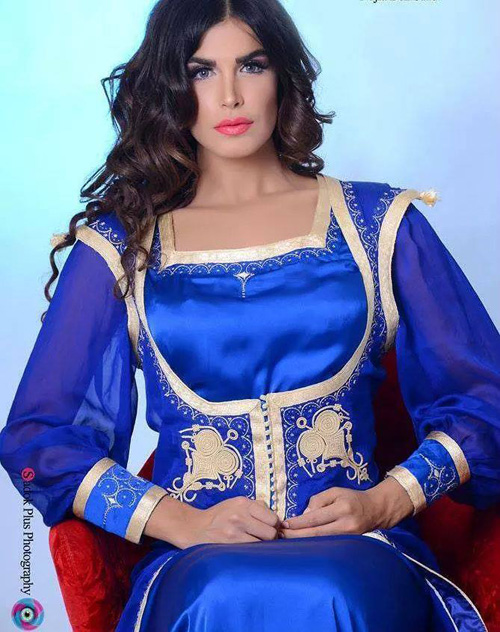 If to talk about traditional women's headdresses in Tunisia, there are many. Firstly, women often wear scarves or veils to cover their heads. Silk or fine wool are mostly used. The scarf can be small (like usual silk scarves used all around the world) or large. The large white or beige scarf (made from silk or wool) is called "sefseri". It covers not only the head but the whole body, leaving the face open. Sefseri is very popular in Tunisia. 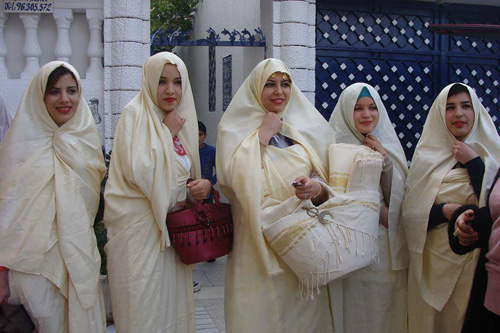 Another headdress worn in Tunisia is a chechia. This flat-surfaced cap is one of the symbols of Tunisia. Today many people in this country consider chechia old-fashioned, but a lot of Tunisians still wear it and think that it should be back into fashion again. This headgear has too long and rich history to be just forgotten. Classical chechia is made of red felt, but these days there are many variations in color, fabric, and decorations. 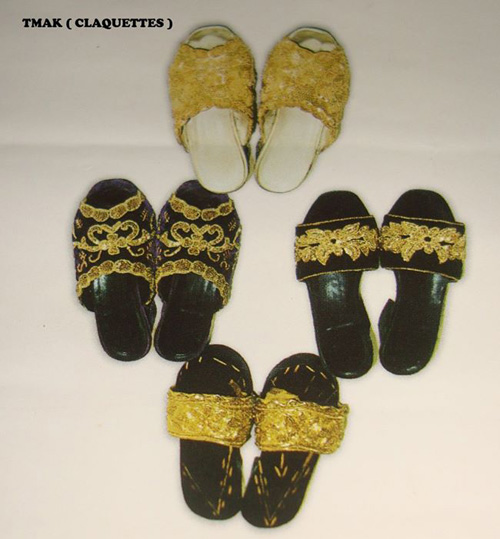 Some women in Tunisia wear hijab. Their number increased in the 2000s. But it still isn't very popular today. More than that, hijab is prohibited by the government in such places as schools and government offices.

Tunisian women use different kinds of slippers as shoes. They can be simple or very ornate (adorned with embroidery and gems).

#1 Authentic Africa 2019-12-01 05:04
These pictures are of colonizers who have copied native clothing.
Quote
Refresh comments list