Tunisians are among the best in the world in creating distinctive signs of their origin. It's not only the design of a veil or dress for women and jebba for men – it's the whole image: clothing, make-up, hair-do, shoes, headdress, jewelry, and accessories. To emphasize their identity, Tunisian people need such clothing crafts as weaving and embroidering. Local craftsmen have achieved excellence in making the most exquisite and high-quality clothing. That's why Tunisians still use the traditional costumes in day-to-day life.

Tunisian people mostly used handmade clothing until the country got its independence in 1956. Since then Tunisian markets were stuffed with imported fabrics and garments. But even today Tunisian traditional clothing crafts – weaving and embroidering – live and thrive. Craft business is rather successful and profitable, which means that Tunisians are able to keep and develop their traditions. 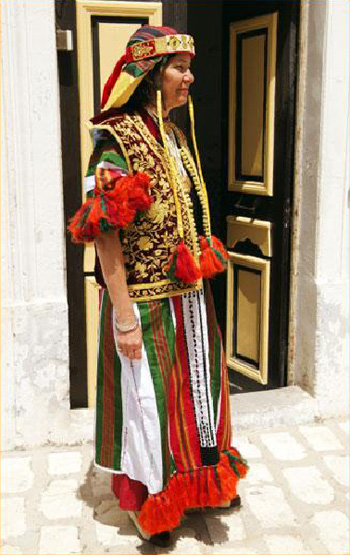 The innovative stream which gives rise to a line of Tunisian Costumes was initiated by ONAT by establishing the "Khomsa d'Or" competition in 1996, giving rise each year to a flurry of creativity (creation of a holding functional city, meeting the requirements of modern life to attend everyday concerns, inspired by traditional Tunisian dress). The craze for this new line of male and female Costumes raises hopes and generates skills. 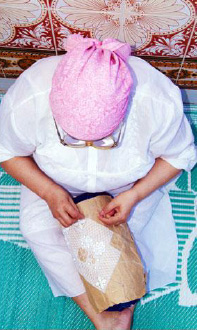 Woman in the process of embroidering

Weaving and embroidering were among the oldest crafts in Tunisia. And the craftsmen have achieved excellence in making the most exquisite and high-quality clothing. Mainly women were engaged in embroidering and weaving, though, some men also made a living this way. Different regions of the country possess their own techniques, typical patterns, colors, and materials. That's why it is so interesting to learn about the diversity of Tunisian traditional clothing.

For Tunisian people embroidery is not just a decoration. It never was. They are very serious about it. Today simpler patterns and cheaper threads and fabrics are often used, but even these days, craftswomen compete with each other in embroidering. And 100 years ago every piece of embroidered clothing was a masterpiece. It was like a book, written by the real master of her craft. Every stitch, every outline on cloth had a deep meaning. You could look at the garment and tell what region (sometimes even city or town) is the owner from, is he/she wealthy or poor, married or single, what's his/her occupation, and many other characteristics. 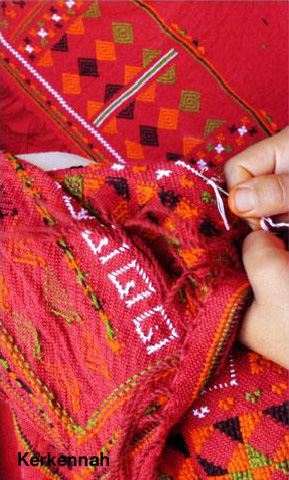 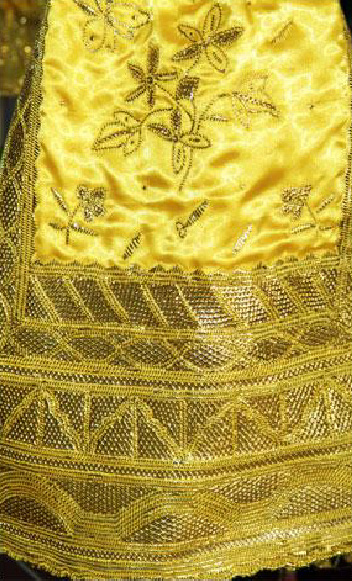 The patterns and embroidering techniques were passed from generation to generation to keep the art of embroidering alive. Girls were taught to embroider since a very young age. It was obligatory for every woman to have this skill, no matter if she lived in a large city or a small village. Of course, citizens of big cities with huge markets and lots of imported clothes were the first to try international attires instead of local Tunisian clothing after the borders were opened. The ancient customs and traditions were kept much longer in remote villages. But many of Tunisian craftswomen still are specialists of embroidery today. They produce and sell handmade outfits richly embroidered and embellished in traditional style. The most popular are traditional wedding dresses made by these craftswomen. They managed to make such garments look modern but with a touch of a rich past of Tunisia.
Tunisian embroidery uses not only colorful threads but also pearls, sequins, silver plates, crystals, etc. All that makes the clothing look even more festive, expensive, and beautiful. Especially if to talk about the wedding dresses and accessories. 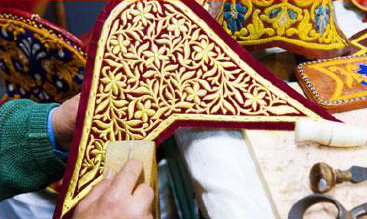 Tunisian national headdress from one of the regions of the country. It is woven and decorated with pearls, beads, and gold plates

The most famous in the art of embroidering are such cities as Nabeul, Moknine, Rafraf, and the whole Sahel region of Tunisia. Each one of them has its own traditions in embroidering, patterns, threads used by craftswomen, etc. For example, craftsmen in Nabeul prefer floral patterns: flowers, leaves, and similar shapes. Sahelian embroidery in different, with a freer inspiration. Craftsmen leave the whole scenes from real life on the fabric instead of simpler patterns. They work in the style of realism, use patterns with a deep symbolical meaning, and make their garments like an artist makes his paintings. Woolen or cotton dresses with Sahelian embroidery are used by brides on the 7th day of the wedding.

Very delicate and complicated embroidery, tiny beads are used to embellish the piece

But women are not the only people in Tunisia who use embroidered clothing. Male jackets, jebbas, and other pieces of attire are also embellished with embroidery. Though, they are not as richly embroidered as female garments.

The profession of weaving was among the most popular and useful in Tunisia since the late 1950s. People used to make their clothing for the whole family. Women were weaving, sewing, embroidering, and decorating the outfits. Almost every family had all the needed accessories and supplies at home to weave cloth. Today most of the clothing is bought at the markets or in stores; the fabric is woven by machines, but still homemade garments, blankets, and fabrics are in use and are rather expensive. Such male garments as "houli" (a white woolen robe) and "burnous" (a white woolen cloak, often with a hood) are sometimes hand-woven by the wives for their husbands. These pieces of clothing are very elegant, and men take pride in high-quality garments. 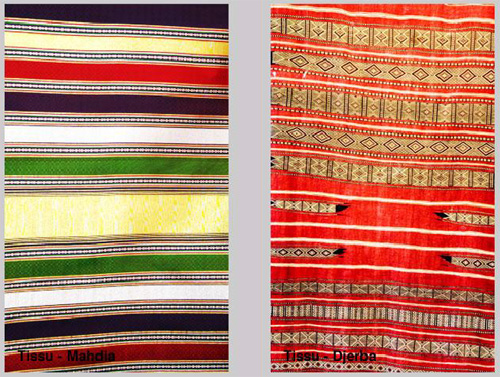 Female woven clothing is even more delicate, beautiful, and remarkable. Such women's pieces of clothing as "houli" (drape gowns) and veils (like mochtiya, bakhnoug, taajira and similar items) are also woven. There is a wide variety of veils and shawls used by Tunisian women. Every region has its typical designs, materials, patterns, and techniques of weaving used to make these items.

Actually, the traditional costumes of Tunisian women differ so much from region to region. And it's not only the design of a veil or dress – it's the whole image: clothing, make-up, hair-do, shoes, headdress, and jewelry. Tunisians are among the best in the world in creating distinctive signs of their origin.
The craftswomen mostly weave woolen cloth but they make outfits from cotton and silk as well. Except for clothing, Tunisians also weave blankets and wrap-around cloths. There is a kind of wrap-around skirt, used by both men and women, which is called "fouta". It is a rectangular piece of stripped fabric. Fouta used to be handwoven once. Though, today this item is mostly produced with a help of machines. Only several craftsmen still make foutas.
At the other hand, the production of handmade and factory produced sefseri (white or beige women's large kerchiefs that cover most of the body) is experiencing a production boom these days. Sefseries are getting more and more popular in modern Tunisia, so the weaving of this piece is very profitable. As well as making jebbas (traditional male robes).

#6 Jeannie 2021-06-17 09:30
It's actually very complex in this full of activity life to listen news on Television, so I simply use internet for that reason, and get the hottest information.
Quote
#5 Don 2021-06-09 15:41
Thanks for finally writing about >Tunisian traditional
clothing crafts: weaving and embroidering
Quote
#4 Harriet 2021-06-08 17:46
This website definitely has all of the information I needed concerning
this subject and didn't know who to ask.
Quote
#3 Dwight 2020-05-18 14:39
Hello it's me, I aam also visiting thks web
page regularly, this website is really fastidious and the visitors are truly sharing nkce thoughts.
Quote
#2 Ilene 2020-05-03 05:42
Thanks for finally writing abojt >Tunisian traditional clothing crafts: weaving and embroidering
Quote
#1 Kristian 2016-05-28 09:06
Very nice post, I definitely adore this website, keep on it.
Quote
Refresh comments list