The Yemeni folk clothing culture is very diverse and interesting. As usual, female traditional outfits are much more eye-catching, elaborately decorated, and bejeweled than male folk costumes. Especially the traditional headdresses of Yemeni women in rural areas – they’re striking! But let’s find out what are the main traditional garments worn by men and women in Yemen, how they look like, and whether they’re totally unique or typical for the Arab culture.

Thawb or thoob or thobe – loose and long-sleeved ankle-length garment. It’s a formal outfit, often worn by men for special occasions. But this garment is so comfortable and perfectly suits the hot Yemeni climate that the local men usually prefer it to Western-style clothes even in daily life. Traditionally, thoobs are light-colored (white, beige, light brown, etc). This folk garment is worn in many countries throughout the Arab world.

Futa or fouta – male wrap-around skirt. This garment is informal and was traditionally worn when doing the daily chores. It is a piece of cotton or linen fabric draped around the lower body. This item often has a checkered or striped pattern. Futa is popular not only in Yemen but also in several other Arab countries.

Makatab – a simpler variant of the futa. It is a rectangular piece of fabric wrapped around the lower body of a man. The makatab reaches the knees. It requires less fabric than a futa skirt. This garment is very informal, mostly used in day-to-day life while physically working.

Ma'wazz – another variation of a futa. This one is more formal than the two previous garments. Yemeni men wear ma'wazz for weddings, ceremonies, and other special occasions.

Men’s shawl – Yemeni men often use this accessory. They drape it over the shoulders or just one shoulder, wound it like a scarf, or over the head as well – the way of draping depends on the region of origin. Such shawls are usually striped or patterned. They are very widespread among Yemeni males. And this accessory is rather unique, worn mostly in Yemen.

Turban – this is the most popular Yemeni male headwear. A long piece of cotton (or other fabric but cotton is most popular) cloth is wound around the head in a certain way. The method of draping and design depends on the region, just as with a shawl. Yemeni men wear different turbans – white, black, colorful, with prints and patterns, checkered, etc. Turban is worn in many countries around the world, not only in the Arab culture.

Alqaweq – a small auxiliary hat, usually worn under the turban so that it stayed in place, but the alqaweq can be used separately as well. It is a small cap made from cloth, straw, or bamboo. 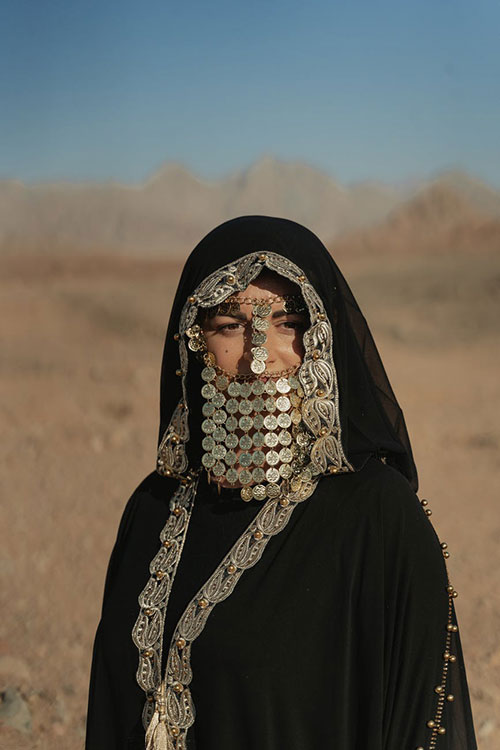 Abaya or balto – women’s black outer garment. It is worn over the other clothes. This outer garment is especially widespread in the cities, where women wear mostly black. In rural Yemeni regions, they add a lot of colorfully embroidered veils and other garments. Abaya is worn practically in all Arabic countries.

Zina – traditional female dress popular in Yemen. It is loose, knee-length or bellow-the-knee length, long-sleeved, with a V-neckline. Zina is usually paired with baggy pants. Though this dress looks like a European-style garment, it is uniquely Yemeni.

Al-Masoon or Sitara – a large veil used by Yemeni women. They cover their head and the whole body in this veil. Older women usually wear such a traditional garment.

Hijab – headscarf used to cover the head, hair, and neck. Yemeni women cover their head with various veils and scarves. Hijab is one of them, and it is worn throughout Muslim countries all around the world.

Almomq – another variant of female headcover. Traditionally, it is black with white and red patterns. Like al-Masoon, this garment is typically used by some Yemeni ethnic groups.

Lithma or burqa – specific veil used to cover the face. Usually, Yemeni women cover only their head, hair, and neck, but some females cover the face as well, so they use a lithma. A burqa is a typical headpiece for the Arab culture.