Fashion of the Dark Age Europe. The Carolingian Renaissance

Thanks to the Carolingian Renaissance that existed in Dark Age Europe in the 9th-10th centuries, France got its reputation as the center of international fashion long before modern days. This period in European fashion history is important – it brought many changes, new trends, and surprising details to that era’s clothing. Various corners of Dark Age Europe – like France, Britain, or Scandinavia – had fashion rules and trends that differed much from each other. In this article, we’ll talk about ancient French clothing – the clothing of Carolingian Renaissance.

When it comes to a fashion, the hangaroc (an apron-like garment used by women of Norse origins in the 8th-10th centuries) is fun but it's a little bit rough and ready, isn't it? And the people – let's be honest: they were a little bit rough and ready too. But let’s look at something extremely sophisticated – a real beacon of light in the Dark Ages, known as the Carolingian Renaissance.

Not to be confused with the Italian Renaissance that happened 500-600 years later. This is the Carolingian Renaissance and it takes its name from Charlemagne. Charlemagne is also known as Charles the Great. Charlemagne was the king of the Franks. He united all of the Teutonic tribes in what would become modern-day France and modern-day Germany. So, he became the first emperor of what would become France and Germany and the king of Italy, and from 800 A.D. onwards, he was recognized as the Holy Roman Emperor. So, the Carolingian Renaissance we associate with the 9th century. It also extended well beyond Charlemagne's life, into the 10th century.

Carolingian fashion was more sophisticated, sumptuous, and elegant than anything anywhere else in Europe. The Vikings, for example, no matter how much wealth they accrued through a pillage, they never really cared about using clothing to show any kind of status. The more stuff you had hanging from your hangerock (a kind of Viking dress), sure, the more status you had, but the actual clothing there really wasn't a notion of a status. Same with the Angles and the Saxons. 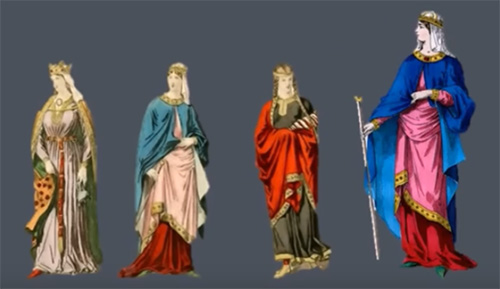 However, the Carolingians would change all that. This is really a moment when fashion reigned. Just look at these images here and I think you can tell: things are a little bit different. Let's break it down.

Structurally similar to everywhere else in Western Europe, Carolingian noble fashion was so much richer in color, embroidery, and trim. We have the double tunic here, but the dyes would have been far richer, the color far more vibrant, and instead of trimming with braid, it would be trimmed with braid and jewels.

Because Charlemagne was so intent on everybody being very classy, very cultured, he made it illegal to touch the arm of a freeborn woman. It was illegal – I mean unless you were married to her, and even then, I'm sure, there were rules about when you could touch her arm. Why was there this rule? Because in other parts of the world, in other parts of Europe, people were a little bit ungentlemanly with the ladies – they would just grab their wife or even a strange woman by the arm and tug her along or try to steal a kiss. Charlemagne didn't want any of that nonsense. So it became illegal to even touch a woman's arm.

And, as a consequence, sleeves became far tighter and were tailored separately – as sleeves. It is opposed to the “mirrored” structure of a tunic. So, we start to see our first genuine sleeves in the Carolingian Renaissance.

Capes instead of cloaks

For men, we really are basically dealing with the same structural clothing elements as the Anglo-Saxons and Viking men. And some male clothing for peasants, farmers, etc was essentially the same throughout Western Europe, yet for Carolingian noblemen, embroidery, expensive dyes, and jewelry were not only the signs of status and wealth, but there were signs of culture. And this is something very important to take away from the Carolingian Renaissance and its use of clothing. It wasn't just a show status, it wasn't just to show that you had political power or importance – it was to show that you had culture, that you were educated, that you were classy. 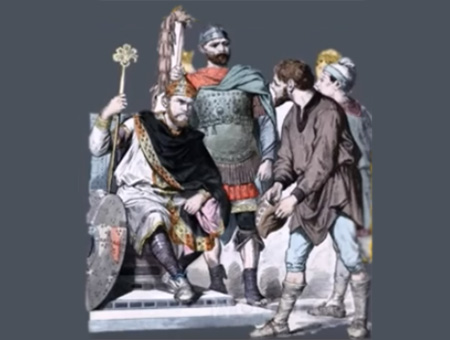 And, of course, when it came to jewelry, there was a particular Carolingian style. Interestingly enough, it's not quite as intricate or as accurate as what we saw even the Vikings do in terms of their ivory work, and certainly not as interlocking and precise as Anglo-Saxon jewelry, but it had this kind of fluid look to it that makes it all the more charming. 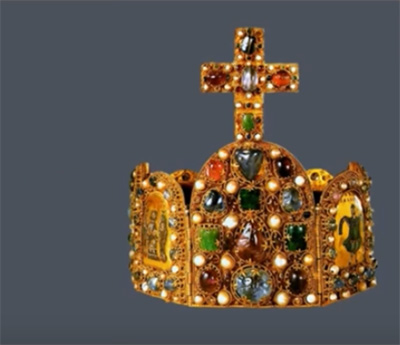 Throughout Europe, the Carolingians were famed for their unique fashion flair. Their fashion was discussed from the Vikings to the Byzantine Empire – everywhere people were talking about how fashionable Carolingians were. Was this the beginning of France's reputation as the center of international fashion? Maybe it was. When we talk about the Middle Ages, we see that people even wrote about other nations wanting to “Frenchify” their clothing. France as an acknowledged center of fashion did not start with Coco Chanel.