Armenian women’s headdresses. Some married women had their chin and mouth covered with kerchief

Armenian traditional dress is rather modest. Women thoroughly covered their body and head with clothes, but the cut and style of garments were very feminine and elegant. Also, they used a lot of delicate silver jewelry, with which the local females embellished their headdresses as well. These headdresses we will study and analyze in this article. For example, did you know that married women in some regions of Armenia wore such a complicated headpiece that they didn’t take it off for days? And they weren’t allowed to be without this headwear even with their husbands.

There are many different Armenian women’s headdresses – for unmarried girls and married women, for various regions of the country, for different occasions, for women of higher and lower status or wealth, etc. But let’s distinguish the most typical folk headwear worn by Armenian females. 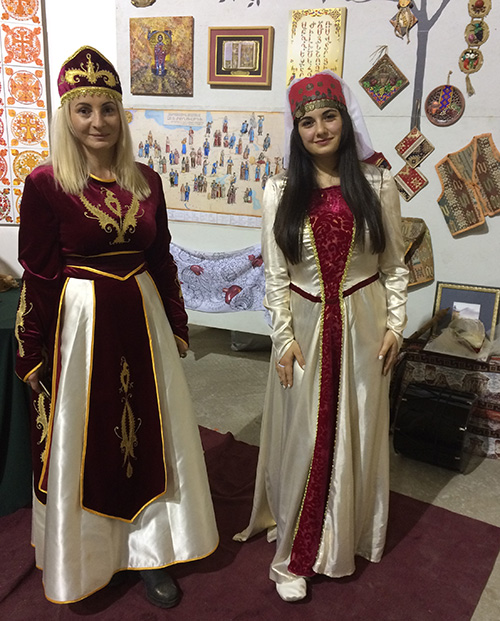 In general, we can divide Armenian headgear into several types: headbands, skull-caps, kerchiefs, and headdresses of intricate construction.

The headbands were usually used by unmarried girls. They could be soft or rigid, depending on what material was used to make them. Often, it was a simple soft band that covered the forehead and was tied at the back of the head; it was usually decorated with coins and/or other adornments. In other cases, it was a round band on a hard frame with some jewels and coins sewn to the surface and hanging from it.

Armenian headbands, just like most of the Armenian female hats, were often adorned with embroidery and jewelry. The festive headdresses were always decorative and really pretty.

We need to mention that Armenian young girls wore their hair braided in numerous braids. A few of them were laid at the front, the rest covered the woman’s back. These braids were also very ornate, adorned with woolen threads (to make the braids thicker and longer), silver chains and beads, tassels, and other decorations.

Over the braids, women could wear a kerchief/veil or a skull-cap. Often, the veils were thin and delicate, made from lace or sheer fabric. Older women wore thicker kerchiefs that weren’t transparent.

A skull-cap is one of the most popular Armenian headdresses. It is widely used even today, but for celebrations, traditional holidays, and other similar occasions. In the past, these caps were worn by most of the females. Married women put a kerchief on top of the cap, while unmarried girls used it alone or put a veil over it. 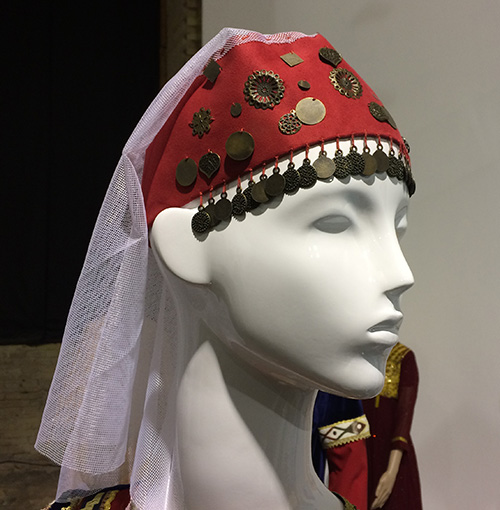 This skull-cap traditionally was flat-topped and rigid. Of course, there were dozens if not hundreds of variations. Most often, the cap was dark-red, similar to a Turkish fez but usually without a tassel and adorned with embroidery, gems, pearls, and jewels. These embellishments were attached to the cap at the front, temple jewelry hung at the sides. All in all, the skull-cap looked really ornate and festive.

In some areas of Armenia, women wore special jewelry over the cap. It looked a bit like a metal cap – an ornate circle with chains that hung all around. Sometimes, this adornment was worn over the hair, without a cap underneath, but only by little girls. 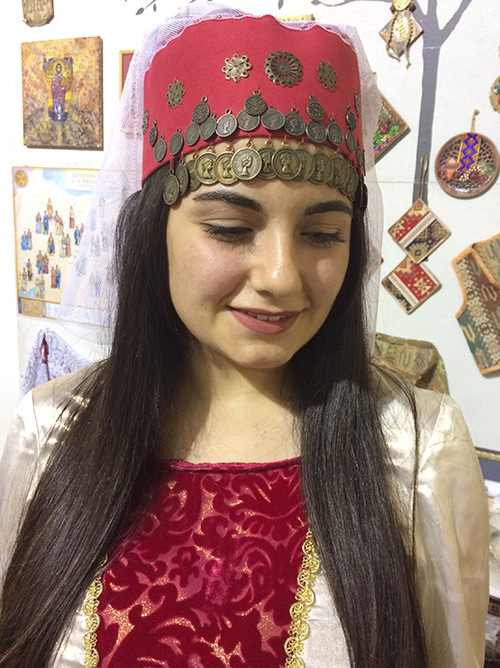 The skull-cap traditionally was embellished with a row of coins attached to it over the forehead. Armenians love to decorate their clothing and headwear with gold and silver coins. It is very typical and can be often seen in the photos, paintings, and on vintage folk costumes.

Armenian married women wore the most complicated and multilayered headdress. In many regions, it was traditional to cover the head, neck, chin, and mouth with a veil or kerchief. After her marriage, the girl put on a special headgear, a kind of a turret called “palti”, “pali/poli”, or “baspind”. It was 8-18 cm (3-7 inches) high. This headdress had a rigid frame made from several layers of glued cloth. Underneath this hat, over the forehead, was put a band with hanging coins or pendants. The mouth and chin were tied with a white and then colorful kerchief, tied at the back of the head. Over all these layers, was put another colorful kerchief. Because this construction was rather complicated and took long to make, women didn’t take it off for a few days; they even slept with it, using a special pillow for the neck.

Also, a married woman could be without this headdress only when there were no men around. Even with her husband and mother-in-law, she had to wear this turret.

But in different regions of Armenia, females wore a bit different headdresses, so even this complicated headpiece could be simpler, not as high and decorative. 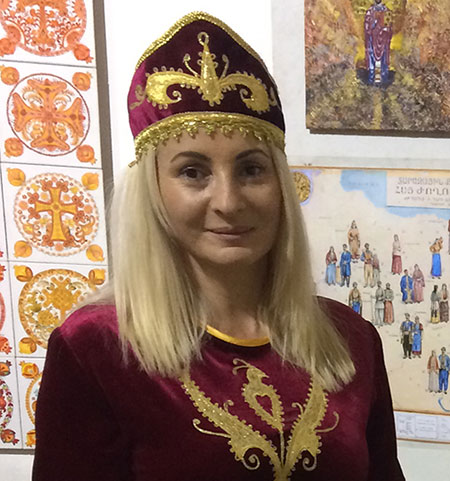 Hello, I want to do an art piece of Mother Armenia based on the statue, and am trying to find a classic headband that she would be wearing. Do you know what it would look like? Thank you! @linda_frankian on IG

Hi Linda, we're not sure, but maybe some of our readers can help you with your question
Quote
#1 Linda Frankian 2020-08-27 17:10
Hello, I want to do an art piece of Mother Armenia based on the statue, and am trying to find a classic headband that she would be wearing. Do you know what it would look like? Thank you! @linda_frankian on IG
Quote
Refresh comments list