This hand-woven belt is very symbolic and sacred in Latvia. From just a regional item of clothing, it turned into Latvian national symbol, and now its patterns occur on Latvian souvenirs, ceramics, T-shirts, mitts, hats, and even tattoos. There are 74 known variations of josta belt, all of them studied and preserved in Latvian National History Museum. But the most unusual and curious thing about this sash is that when Latvians pick one to buy, they close their eyes, move a hand over belts with different patterns, and try to feel the right josta (they say they know it by the feeling of warmth).

A josta belt is also called “Lielvārde sash” because it originates from Lielvārde region of Latvia. At first, it was just an ordinary hand-woven belt worn with Lielvārde folk dress. But today, it has become the symbol of Latvia and is among the most treasured cultural heritage pieces.

This sash is always red&white – these two colors are considered protective and such a combination you can very often see on Latvian traditional clothing. This tradition exists since the pagan times and until today.

Creating a josta is rather labor-intensive and complicated. It takes about 2-3 weeks of 8-hour work a day to weave one sash. And it is always hand-woven, either on a stationary weaving loom (floor loom or table loom) or a backstrap loom. Most often, artisans who specialize in josta belts create them and sell to everyone interested. Very few ordinary women make their own josta. A Lielvārde sash is made from linen and wool yarn. Its width is typically 10 cm (4 inches) and length – 3 m (10 feet).

For now, Latvians know 74 variations of Lielvārde belt from different districts and areas. All of them are displayed in Latvian National History Museum where you can compare them and notice the similarities and differences. 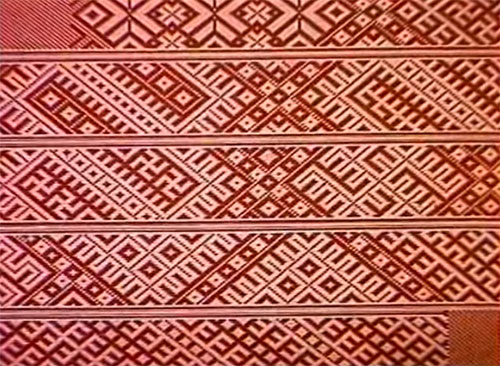 Latvians respect and preserve their old clothing traditions. Many of the local garments, motifs, folk crafts, and national attire traditions exist for centuries. And these clothing customs are really interesting. For example, Latvians pick a josta sash by its energy flow. They believe, and a lot of people would agree with it, that different colors and embroidered or woven patterns and symbols radiate certain energies. So, a Latvian lady comes to an artisan or folk clothing store, a number of belts are laid in front of her, she closes her eye and moves her hand above the sashes to feel the right one. When she feels warmth emanating from a belt, she stops and opens her eyes – this josta with its unique pattern fits her own energy and should work the best as her protection from evil. You can believe it or not but this tradition is old and Latvians say that it works just fine.

Today in Latvia, the local national costumes are very popular, people often wear them for festivals, folk celebrations, and so on. These outfits are seldom worn in everyday life, though. But the patterns from a Lielvārde belt became more widespread than the folk dress itself, and they mix with the contemporary fashion and lifestyle perfectly. These motifs are often used as prints on modern clothing, depicted on ceramics and souvenirs, painted in illustrations, and used for tattoo designs. The symbols woven into josta belts are millennia-old – we see practically identical or very similar symbols on artifacts from the Neolithic Era and Bronze Age. It’s wonderful when something that old becomes a part of contemporary culture.