Viking clothing and jewelry in Iceland

Iceland was founded by the Viking settlers. They brought life to this island, together with their lifestyle, culture, traditions, and crafts. So the early inhabitants of Iceland (the 10th-11th century) wore Viking-style garments and adornments. In this article, we’ll see how their clothing looked like, what materials they used to make outfits, what jewelry pieces they wore, and how many layers of clothes there were in that period. As you may know, Viking traditional costumes and jewels are very pretty, skillfully-made, and comfortable to use. These people often invented things to make life and work easier, like the hangerock and its necklace.

The clothing styles were remarkably consistent throughout most of the Viking lands.

Men wore a tunic that was tight-fitting across the chest with a broad skirt. Down below, were trousers, which could be either loose-fitting or tight. 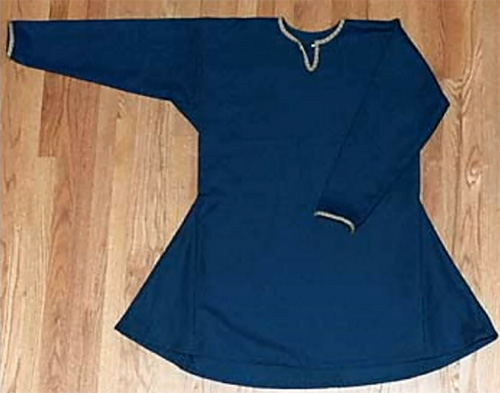 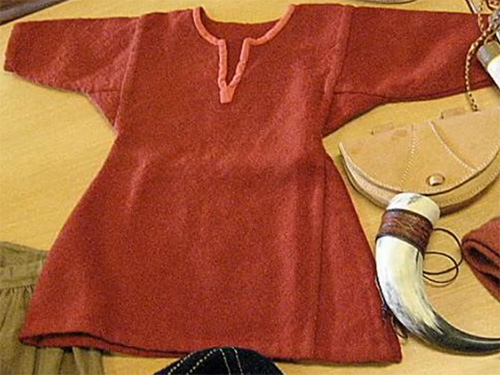 The outer garment for the man's upper body was called “kirtle”, the overtunic. It was constructed from wool and was constructed using surprisingly complicated patterns – with many pieces that needed to be cut out of the fabric and sewn back together. However, when it was all laid out, very little of fabric went to waste. The upper part of the garment is relatively tight-fitting but the sleeves are fitted to provide freedom of motion. 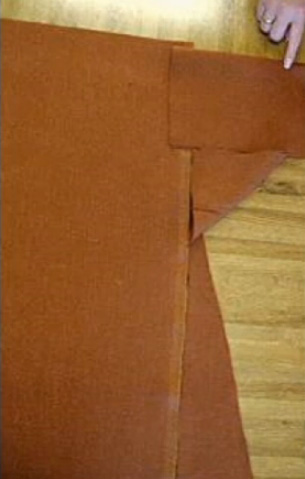 The tunic’s skirt ranged from thigh-length to knee-length. As with most articles of clothing, the length was determined by the wealth of the owner – a poorer man would not waste material that wasn't needed, while a more wealthy man would show off his wealth by using more material.

The tunic was pulled over the head. There were usually no fasteners, although some tunics had a simple button and a loop thread to fasten the opening. Many different shapes were used for the neck opening on male and female tunics. 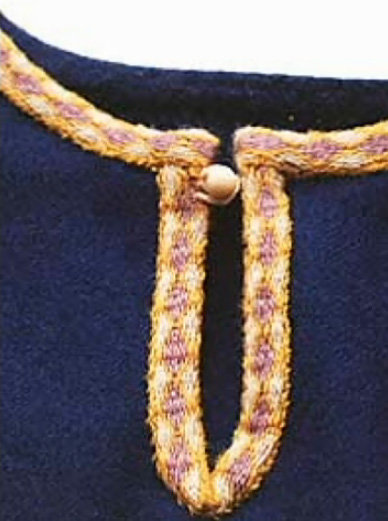 Also, there were some adornments on the tunics. The poorest people decorated their garments with braids at least on the neckline and cuffs. The tunics of the more wealthy people were also decorated – with braiding on the hem of the skirt. The braid was woven with brightly colored wood using tablet-weaving. 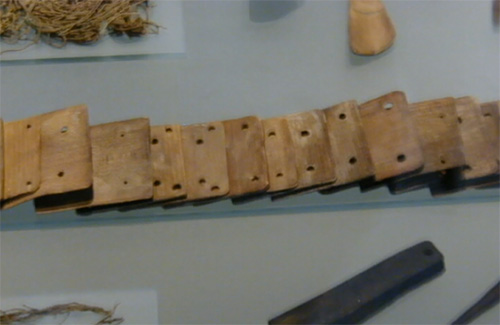 The tablets had several different designs of holes. 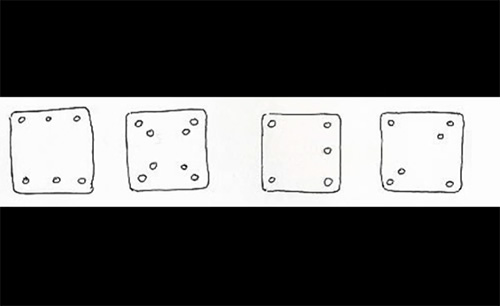 Imported silk was also used to trim a tunic. Although, it was expensive and only the wealthiest people used it. Silk was taken from voyages to the Middle East.

Under the tunic, it's likely that most men wore an undertunic. This was made mostly from linen. It was more expensive than wool but more comfortable against the skin and was an extra layer of warmth. The construction was similar to that of the overtunic, except that the sleeves and the skirt were made longer. 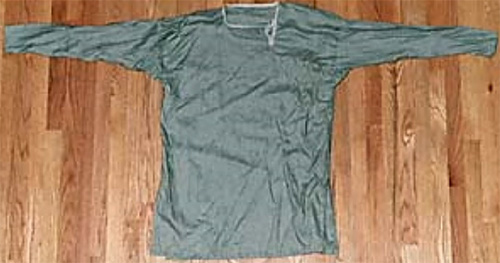 It appears that a wide range of styles for trousers was used in the Norse Lands. Some were tight and some were baggy. Most trousers were of simple construction but some had been more complicated. Trousers had no pockets and no fly.

The lack of pockets in any Viking area clothing meant that men and women had to carry their everyday items suspended from their belt or from pouches, carried around the neck, or suspended from brooches.

It is possible that some trousers were held up by a simple drawstring and a waistband. But many surviving examples of trousers have belt loops, suggesting that trousers were held up with a belt or sash. Some means of holding up the trousers is required since there was no opening at the waist. The waistband must be big enough to pass over the hips. 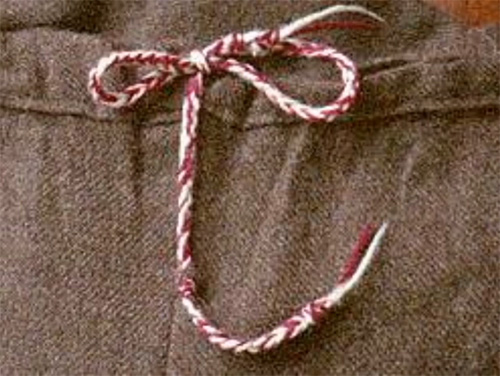 They wore leg wrappings from knee to foot. The wrappings consisted of two long narrow strips of cloth (typically wool), which were round around the leg and foot by starting at the knee and wrapping downward and ending at the toes. No clips or fasteners were needed. 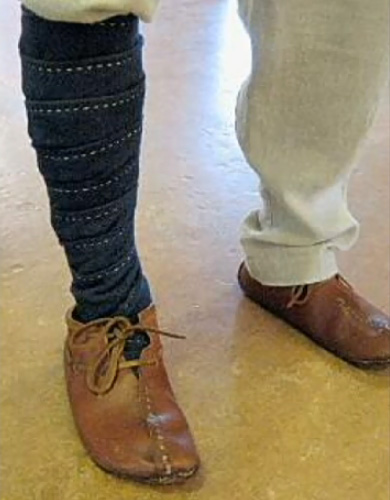 The fabric would have been woven to the correct dimensions of the intended purpose, rather than cut from a larger piece of cloth. Having selvages along each edge would resist fraying.

Both men and women wore outer cloaks. The cloak was simply a large rectangular piece of wool, sometimes lined with contrasting color wool. Cloaks provided extra protection from the cold, from the wind, and to a limited degree – the rain.

Some cloaks were made with very dense, very thick wool, which would have provided extra protection. Cloaks were typically worn offset, with the right arm – the weapon arm – unencumbered by the cloak. 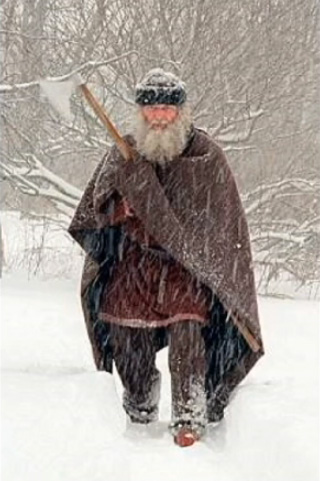 They could be embroidered or trimmed with tablet-woven braids. Typically, they hung to somewhere between the knee and the ankle, depending on the wealth of the owner.

Some cloaks had a shaggy exterior, like a sheepskin. The shaggy appearance was created by tying additional threads to the woven threads while the fabric was being woven. 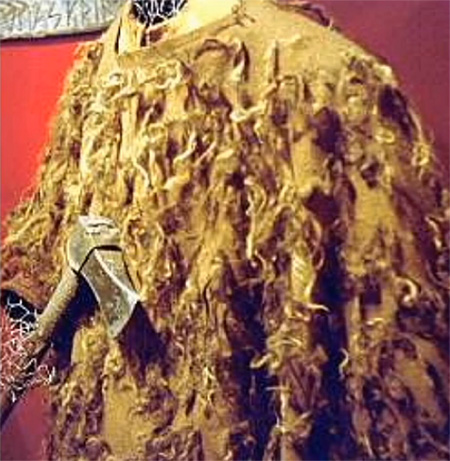 Cloaks were held in place by a pin at the right shoulder. The pins ranged from iron, bronze, wood, antler, bones, or even elaborate gold jewelry. A common style was the annular brooch. Like all Norse jewelry, the brooch typically would have been highly decorated. 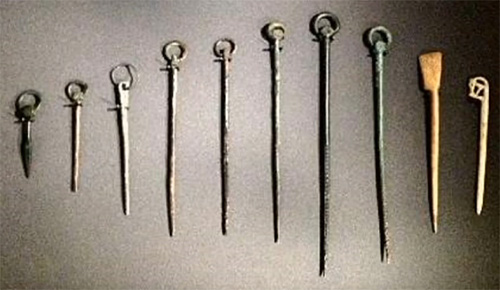 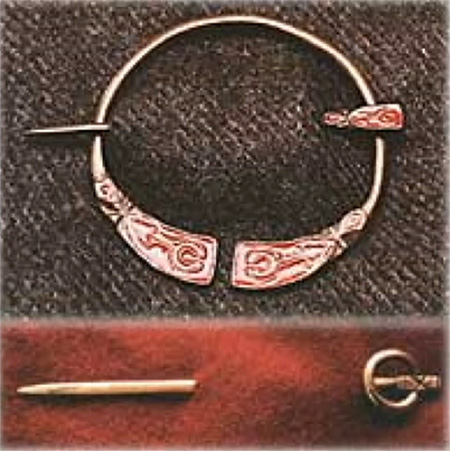 Caps were made of wool or sheepskin or leather and fur. Some had ear flaps for warmth. They were made with 4 or more triangular pieces sewn together. 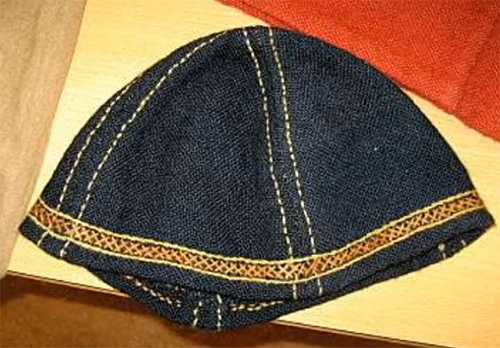 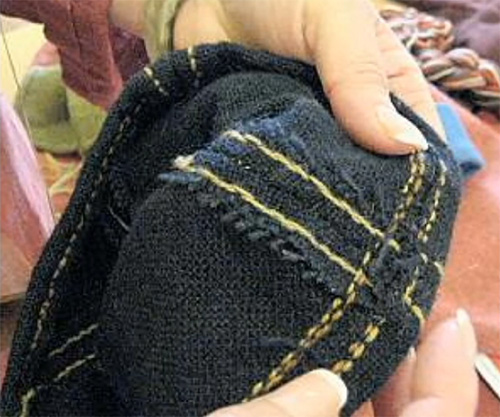 Socks, apparently, were optional, depending on the wealth of the individual or the season of the year. Those without the means for socks used moss or grasses or even hay to line their shoes. When socks were available, they were made of undyed wool. 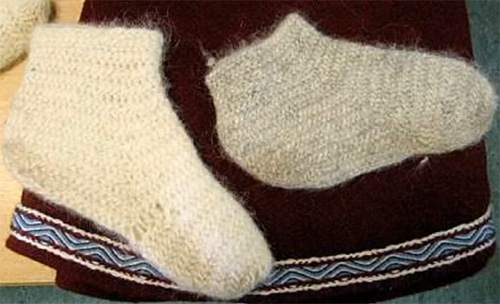 The Norse socks were not knitted. Instead, they were made using an ancient technique called “nalbinding”. Using a single large thick needle, it was a method of knotting the yarn. A thread, should the break appear in the garment, would be less likely to unravel.

Shoes were simple affairs made using the turnshoe technique. The uppers were sewn to the sole with the finished side inside and the rough side out, then the shoes were turned inside-out. 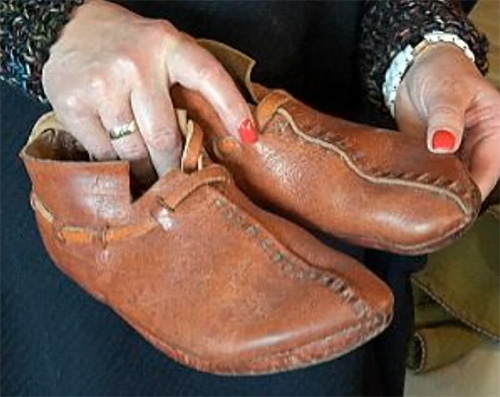 The women's clothing, in general, was made from the same materials as the men's. 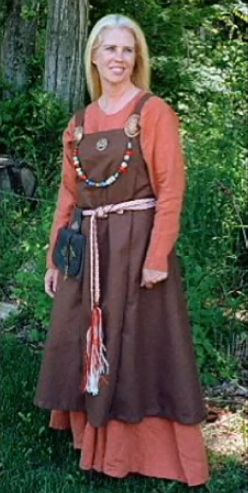 Typically, a woman wore an ankle-length linen underdress or shift, with the neck closed by a brooch. Over it, she wore a shorter length woolen dress, suspended by shoulder straps, fastened by brooches. This kind of suspended dress is sometimes called a “hangerock” or an “apron skirt”. 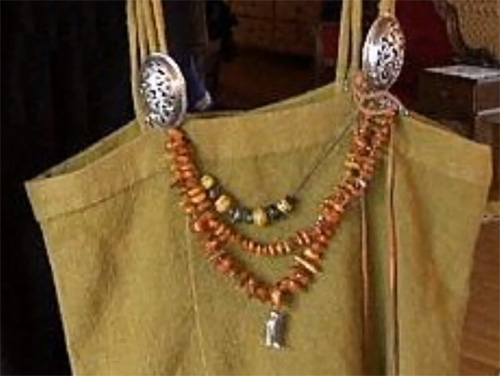 There was a wide variety of brooches used on female clothing. In modern times, this kind of brooches is sometimes called “turtle brooches”, since their shape is similar to the shell of the turtle. 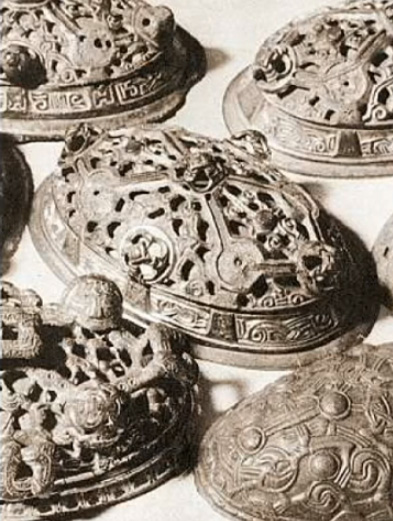 There's also evidence for some overdress which completely covered shoulders and required no brooches to hold it in place. 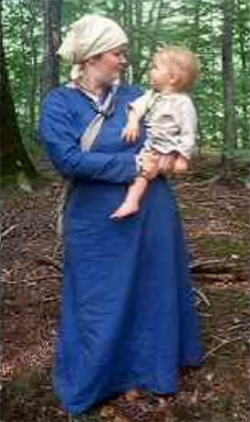 The women would wear an ankle-length coat-like outer garment over her suspended dress, but cloaks or shawls were also used and were, probably, more common. 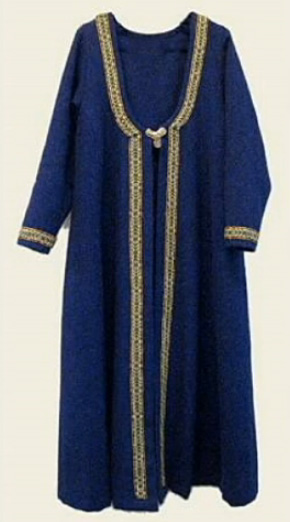 Women often used tri-lobed brooches to fasten the neck opening of other clothing. 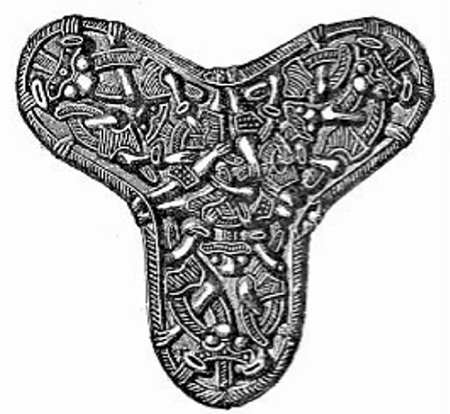 Head coverings were typically worn by women. Perhaps, as simple as a knotted neckerchief over the head, which was found at several burial sites.

A number of different kinds of head coverings for women are mentioned in the sagas, some of which were very elaborate headdresses which may have been worn like jewelry on special occasions.