Ukrainian married women traditionally covered their heads. This tradition takes roots in the ancient times – Scythian (585-260 B.C.), Sarmatian (450 B.C. - 400 A.D.), females of various Slavic tribes and the Kyivan Rus’ (882-1240 A.D.) all wore some kind of wimples or veils covering their hair. And Ukrainian women continued this tradition until the beginning of the 20th century. Obviously, there were some tricks and secrets of wearing different folk headdresses. We’d like to share a few of them with you.

The most common headpiece of married women in Ukraine was a kerchief. Today, many elderly women also use it, but the way of draping it has changed since the 18th – early 20th century.

In the past, a fine high-quality kerchief was a treasured possession. It was expensive, so females made a lot of effort to make it last longer. And the main trick was, of course, to wash it less frequently. But this didn’t mean that they wore dirty kerchiefs – it would be a shame on their heads. It meant that they needed to somehow protect the headgear from the hair grease. Most females in the 1700s-1800s, used coifs and caps underneath the kerchief. There were everyday and festive coifs, and everyday ones were made from some simple natural material, like linen or cotton, so it could be washed often. 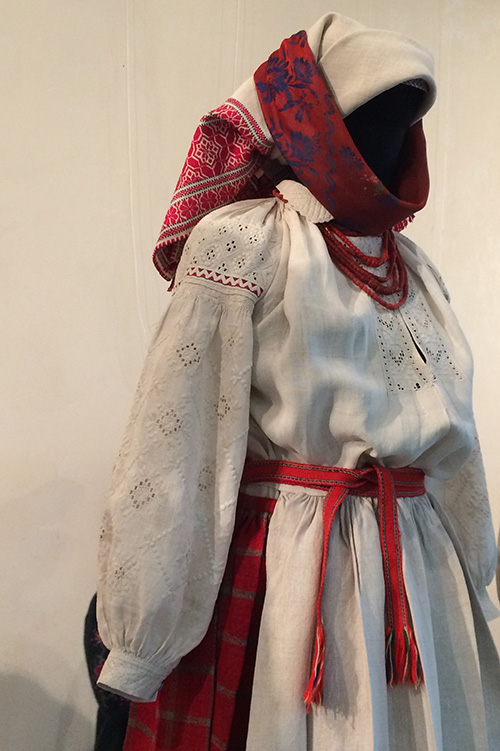 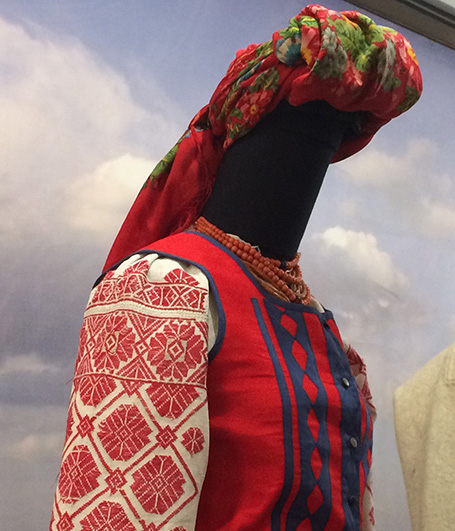 For the purpose of convenience, women wore their hair braided and in updos, piled on the top of the head. Thanks to this, the hair was out of the way when a woman was working in the field or doing chores. They didn’t have our modern elastics, crab hairpins, and other fancy hair accessories, so they just braided their hair and used threads, ribbons, or leather ties to keep everything in place.

There were many ways of tying a kerchief, depending on the region, age, taste of the wearer, local traditions, etc.

Another common married women’s headpiece was called “namitka”. It was popular in some areas of Ukraine, not everywhere. Though, this headdress is probably the oldest known headpiece worn on this territory. It is a long rectangular piece of white cloth, often with hand-embroidered or hand-woven patterns on the ends, worn wound many times around the head. Like a wimple. Usually, it covered not only the head but the neck as well, the fabric was placed under the chin to do so. There were dozens of ways to drape a namitka. This headdress looks very regal and proud. 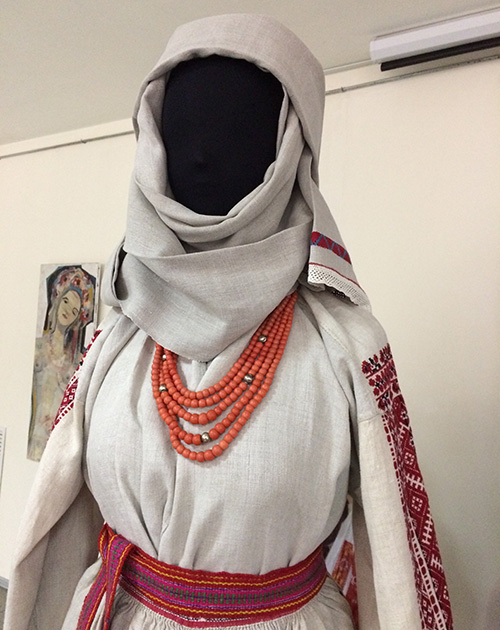 One particular accessory is especially interesting. It reminds us a little of a headband, and it was a very comfy and beloved thing for married women in most regions of Ukraine. As synthetic flexible materials weren’t yet invented, people needed something to tie their hair and keep it in place. This item was a nice one. It is called “kybalka” or “kychka”. Basically, it’s a thin round piece woven from cord. It looks like a nimbus). 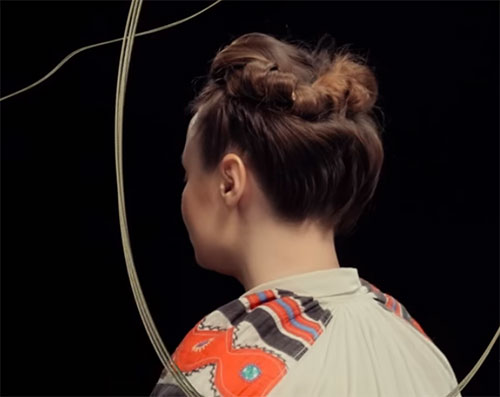 Hairstyle with kybalka. This is a screengrab from a video by SPADOK project. You can find this video here (the last one on the page)

Kybalka was placed on the head, the hair was divided into two parts, and each part was twisted all around the cord several times. In the end, the hair was neatly wound around this headband and looked like a crown in the front. This accessory helped the woman to arrange her hair quickly and it stayed in place during the whole day, without entangling or falling down.

On the top of this round construction of hair, a coif was worn to fix it even better. The design, material, cut, and shape of a coif were diverse. The most popular among everyday caps were crocheted coifs. They let the skin breathe. Festive coifs were usually decorative – embroidered or made from brocade or silk fabric, etc.

Except for keeping the kerchief clean, another purpose of coifs was to create a certain shape for the headpiece. In different regions and different periods, there were different fashionable designs and shapes of a headdress. But usually, you needed to have volume because it meant that you have a lot of thick and healthy hair (which is something modern females also try to achieve). Also, a shapely construction is simply more beautiful than just a smooth sphere of the head. As women hid their hair under the headdress, no one – except for her closest family – knew what kind of hair she had. So, it never hurt to add some volume to the headdress so that people assumed that a woman had fine thick hair.

In some Ukrainian areas, women used a specific headband under their kerchiefs. It was made from wood. The shape was round and the height could be different (most often, up to 7 cm). This headband was sometimes also called “kybalka” because the shape of the hairstyle it created was the same as with the round cord. This hairdo is similar to the European fashionable hairstyle called a “cottage loaf”, but it was covered with headwear.

High wooden headband. Another screengrab from SPADOK project video (the second video on the same page)

This wooden band could have a cloth top. It was quickly and easily placed on the head, with all of the hair inside of it, and covered with a kerchief.

Interesting thing about such headbands was that they completely hid the amount of hair a woman had. They created the illusion of volume, while her natural hair could be thin or even short. Though, women normally never ever cut off their hair. There were cases when a mother cut her braid and gave it to her unmarried daughter to use like a chignon – if a girl lost her hair to a sickness, fire, or other mishaps. People sometimes punished young girls for having intimate relationships with boys before marriage by cutting her hair off. It was a shameful thing to not have long and healthy hair, so a girl with a short haircut most probably would not find a husband. That’s why mothers sometimes sacrificed their own hair to daughters – though, this was an exceptional situation.

These are by far not all of Ukrainian traditional headdresses. We’ll continue to introduce you to authentic headpieces of Ukraine in the following articles. Also, if you’re interested in any particular headdress or topic on Ukrainian headwear items, let us know in the comment section below and we’ll make a separate article about it.